Story
The main theme of this game was Timofey Mozgov’s return to basketball. The experienced center was sidelined for nearly three years because of injuries. Many skeptics had already rushed to end his career. In the game against Enisey, however, the veteran once again stepped up to the plate. Khimki, meanwhile, had their staffing problems. Two of their best players – Alexei Shved and Jordan Mickey – had been out injured recently. That gave their opponent a fighting chance to win.

Mozgov was on the court in the middle of the first quarter. Enisey were in the lead at that point. The bright play of Tyus Battle and Ilya Popov helped Enisey to take a 2-point lead 12-10. The veteran’s appearance paid off. Timofey moved the ball perfectly, fouled his counterpark Alexandr Gudumak and scored twice from the free-throw line. In combination with the successful play of Anton Ponkrashov and Errick McCollum, the home team came out on top, winning 23-21.

During the second 10 minutes, the leadership factor began to emerge more and more. Battle continued to be unstoppable for the Siberians, while McCollum showed off for Khimki. As a result, the home team’s guard was more effective than his Krasnoyarsk counterpart. Errick scored 11 points during the quarter, allowing the yellow and blue to extend their lead to “+7” at the big break, 48-41.

The third quarter was a sniper’s time. Sergey Monia made two three-pointers to start the game. Enisey took over for the long-distance play, however. Back-to-back baskets by Mikhail Kulagin, Tyus Battle, and Leyton Hammonds allowed Enisey to cut the lead to just 60-61. Once again, McCollum helped Khimki out in this difficult spot. His 8 points in the final frame allowed the home team to regain a comfortable lead, 64-70.

Key moment
Enisey still managed to pull their opponent to a nervous end. With just over a minute left, the Siberians held an 83-82 lead. At that point, however, McCollum stepped up again. Three free throws and a block shot on Hammonds sealed the game in favor of Khimki. That win guaranteed a playoff for them.

Hero
This game was a true benefit for Errick McCollum. The American made the key points in the closing minutes, scored 31 points and updated his personal best efficiency and productivity records this season (29).

Stat
1,015 is how many days Timofey Mozgov went without basketball. In his debut game after a long break, the center played 15 minutes on the floor. During that time he scored 6 points (2 for 5 from the field), grabbed 6 rebounds and made a game-winning assist.

Comments
Acting head coach of Khimki Andrey Maltsev:
– I’m very happy for the guys who entered an even tougher week after a tough one and managed to win. We had a double trip to Euroleague, we came back on the weekend and immediately went into action, because at this point any team, whether they made the playoffs or not, is struggling and playing, which is what I told the guys before the game. They stepped up on the court and endured a tough game. It’s also very important that after three and a half years Timofey Mozgov came back on the court. It was a key moment: he helped us as much as he could but, most importantly, after the game his knee didn’t bother him. That means we will continue to work with him.

Enisey head coach Drazen Anzulovich:
– Congratulations to Khimki! They played much smarter, especially in the closing minutes when we led for 50 seconds before the end. The problem wasn’t just in the final minutes, though. We played an absolutely reckless game without any tactics and didn’t play the tactical game we wanted. That was the key factor. We were giving up 7-10 points all the time and when you’re trying to get back in the game and that chance comes up, you have to play smart, which we didn’t do. 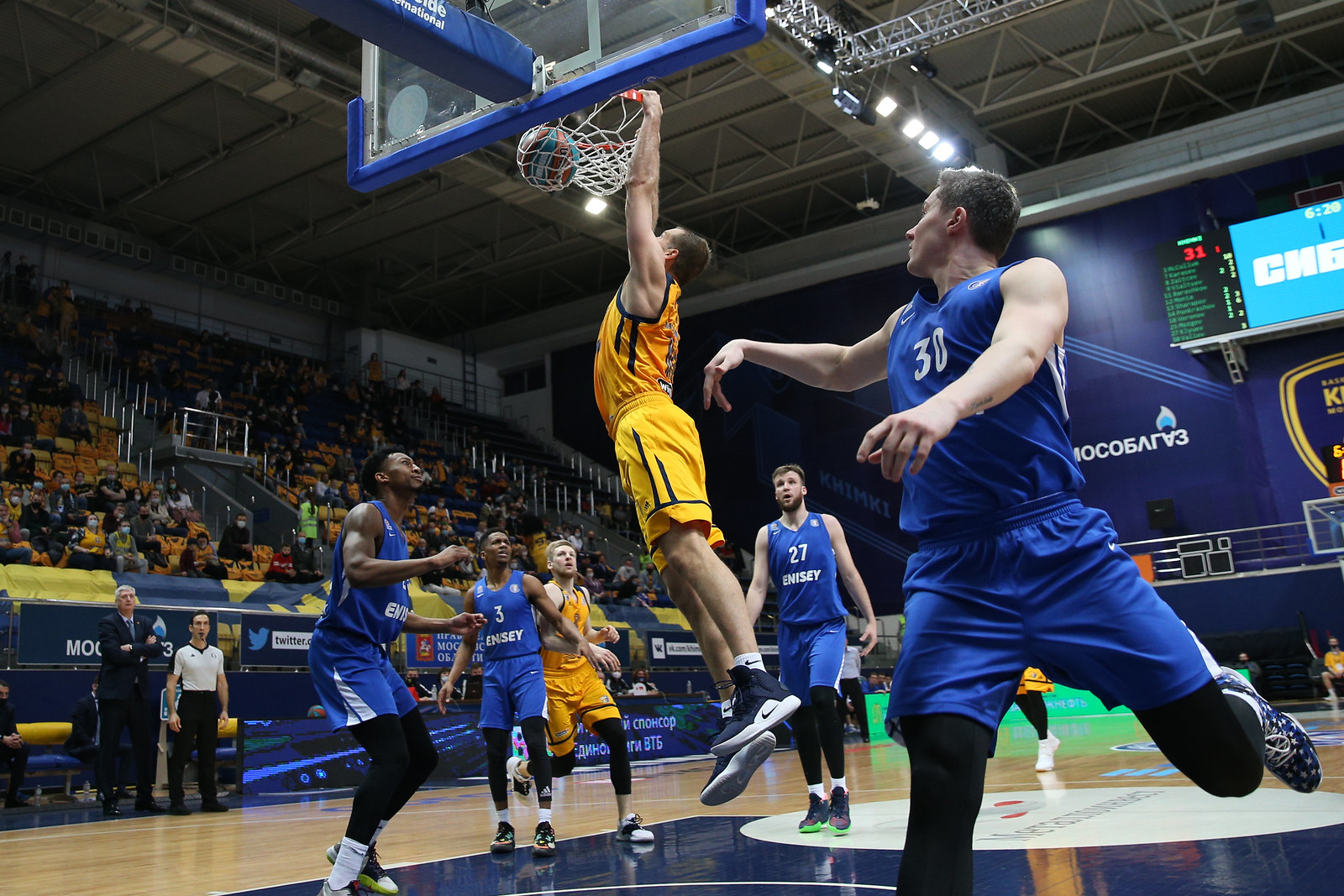