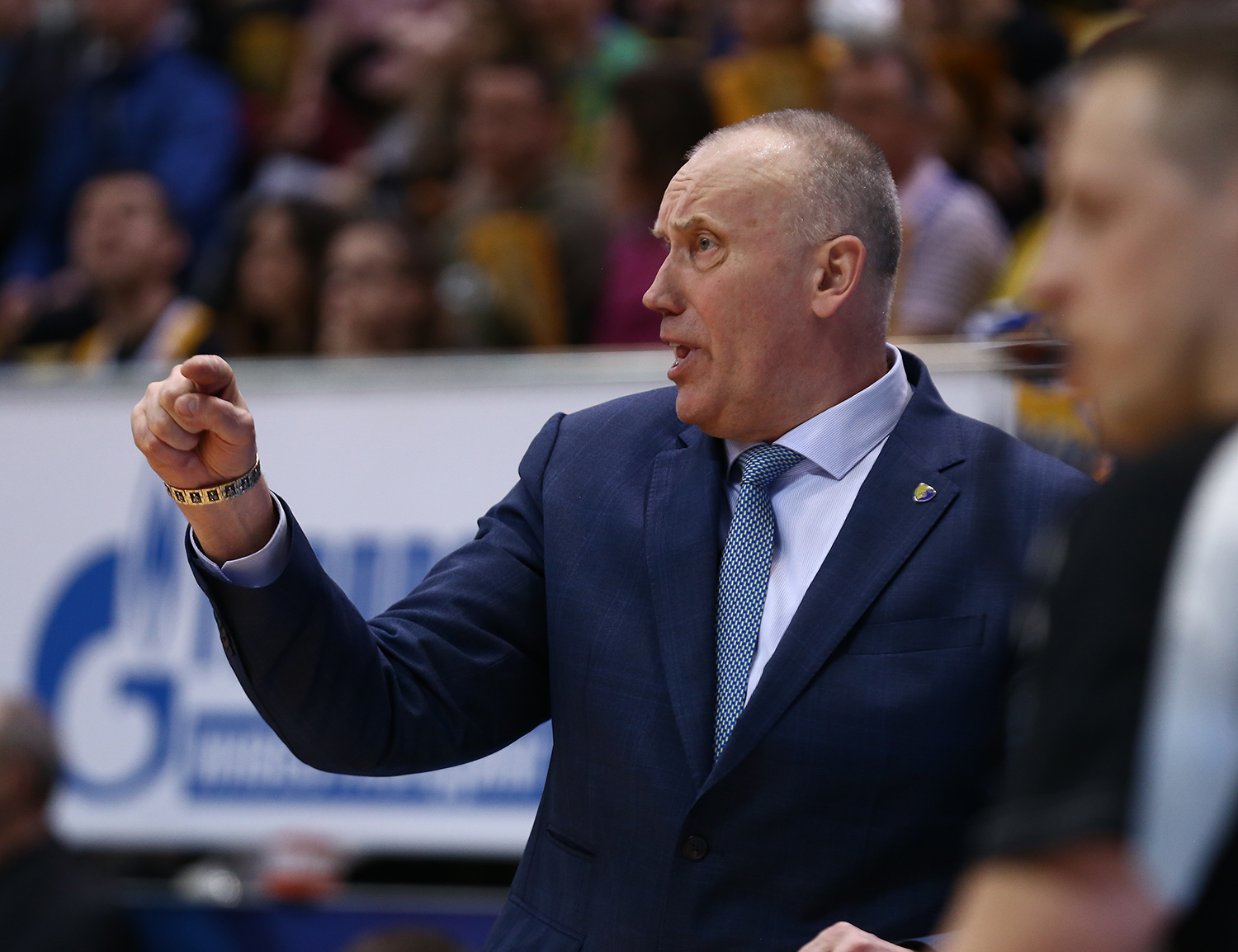 “If you want to play, practice!”

– After the game against Barcelona in the EuroLeague, you said it’s hard to play with eight men. Now Astana is playing you with eight men…
– And it’s obvious, you can see the outcome. They can compete in the first half, but the lack of a rotation catches up to them in the second half. We can make substitutions every 2-3 minutes without losing quality, style or aggressiveness. I think our bench is one of the primary advantages in this series.

– Are you following the UNICS – Kalev series, which will likely determine your semifinal opponent?
– Yes, I watched the first game. It was pretty close. Kalev has the same problem as Astana when it comes to a rotation. Also, these teams aren’t used to playoff mode. Khimki and UNICS played in Europe and often had three games against serious competition in a week. The same was not true for Astana and Kalev. They are heavy favorites in their domestic leagues and many of their opponents don’t present much of a challenge.

That lack of experience was evident in the second game between UNICS and Kalev, when Kazan decided the outcome in the first quarter (40-13). The Estonians might bounce back at home, but I don’t think they’ll be able to win a single game against UNICS.

– If Khimki closes out the series with Astana in Game 3, how many days off will your players have before the semifinals?
– It’s hard to predict. It’s not a good idea to think about vacation right now. As far as I know, if we win in Game 3, the break will be almost two weeks long. That’s a long stretch, during which you can lose your rhythm. I think immediately of the 2013-14 season, when after a terrific regular season (ed. 18-0), we didn’t play for around a month, then lost 3-0 to Nizhny Novgorod in the quarterfinals in sensational fashion.

This time, if possible, I hope we’re able to find at least one team to scrimmage, which will help us stay sharp.

– You hold grueling, lengthy practices with your teams. Have you ever worried the method is outdated?
– I have no reason to. We treat everything like flying. Pilots who haven’t flown a certain number of hours aren’t allowed to operate a fighter jet. If you want to play, practice. Three-hour practices were useful several years ago, when we were able to win the EuroCup and they are now, too. Watch how we run and defend for all 40 minutes and how many fast breaks we have!

I joined the team midway through the season, but at the same time, in my opinion, the team’s physical condition was not satisfactory. Now things are much improved. We reduced the workload somewhat for the playoffs. Of course, you don’t have to practice at all and go out and beat any opponent, but you’d need Michael Jordan, Larry Bird, Kobe Bryant and LeBron James on your roster. “How do you enforce the rules with millionaires from the NBA?

– Which coaches do you follow closely?
– I pay close attention to Zeljko Obradovic, Ettore Messina and Sarunas Jasikevicius. Yes, they are very strict, but that’s what produces a result.

I still consider Zeljko Obradovic, with whom I was lucky enough to work at Real Madrid, to be the best coach in Europe. His accomplishments and titles demonstrate his greatness. He’s been a EuroLeague champion nine times!

– Sarunas Jasikevicius could join an NBA team this summer. Can he have the same success across the ocean?
– That’s a big question, because in the NBA the coaching factor decides almost nothing. It’s a different style there. The league rules are all intended to help a player excel individually. If you have players on your roster who know how to play 1-on-1 at a high level, then you can depend on success. European strategies won’t work there.

We have David Blatt’s example, of course. He did a great job in Cleveland, but the club still wasn’t satisfied for some reason. Probably because he tried to enforce discipline on the team. How do you enforce the rules with these millionaires in the NBA anyway?

I don’t think Sarunas Jasikevicius needs to jump into a head coaching job in the NBA right away. He’s a very talented, smart, promising coach, but first he should test the water and gain some experience in American basketball.

– Jasikevicius once again led Zalgiris to the EuroLeague playoffs. What did the Lithuanian team have this season that Khimki lacked?
– Zalgiris got its injured players back in time. They were the reason the Lithuanians beat Real, Olympiacos and Maccabi on the road at the end of the season. That wasn’t the case for us, unfortunately.

We lost our two best players and their rehab ended up taking longer than expected. We also weren’t able to sign new players in time. Janis Timma, for example, wasn’t allowed to compete in the EuroLeague. Tony Crocker and Jordan Mickey were also hurt. In the end, we had to play our biggest games short-handed.

Plus, we are realists. We know that you can’t chase two birds at once. Once we understood we wouldn’t make the EuroLeague playoffs, we refocused on the VTB United League. We let the players recover so that the team would enter the spring at full strength.

It’s no secret for anyone that the goal for the top VTB League teams, except for CSKA, is to reach the finals, which guarantees a spot in the EuroLeague. If the Army Men don’t reach the finals, then the primary goal is to the win the League.

– The EuroLeague Final Four is just around the corner. Who do you think will win?
– If I knew, I’d tell you. I think that if Fenerbahce brings a full roster to Vitoria, they will be the primary favorites. On the other hand, Real will be playing in front of its fans, CSKA is on a roll in recent games and Anadolu Efes is the biggest dark horse of the season.

– A month ago, Alexey Shved said that Andrew Harrison has no idea what to do on the court. You were also unhappy with his lack of aggressiveness and effort. Has something changed since then?
– Yes, right now he’s practicing apart from the team and getting in better shape. There’s progress. The coaches are satisfied with his results. I think he ran into trouble because he had hardly played this year due to his short-term contracts in the NBA. I really counted on him playing the type of basketball he did during his time in Memphis, but Harrison hasn’t gotten back to his previous level yet, unfortunately. He’s trying to get by with his talent, but he lacks the conditioning and energy for now.

There’s a limit on foreign players in the VTB United League and it turns out that Harrison is the odd man out. The rest of the guys have excellent chemistry. They’ve been together since the start of the season and Janis Timma, who also joined during the season, has adapted quickly thanks to his high basketball IQ.

It’s always important to have a strong back-up so that the rotation doesn’t suffer. Nizhny Novgorod, for example, didn’t have a backup to Kendrick Perry. For us, Harrison’s presence gives us confidence. “During my free time, I love watching Comedy Club and Ural Pelmeni”

– You often emphasize that players need to play tough and never quit. If a basketball player isn’t a warrior, but still very talented, can he work on your team?
– The biggest talent is being a warrior. That’s true in any sport, not just basketball. What does talent mean? Being able to make a shot? Everyone can do that now. Even centers have started shooting from outside. But some guys can chase a ball going out of bounds and others can’t.

I always prefer a warrior. They can be taught. Forcing a talented player to give everything on the court is much more difficult.

My ideal basketball player has always been Michael Jordan. The combination of his talent and effort made him the best player in NBA history.

– Astana head coach Emil Rajkovic said that if his team had a chance to sign a player for the playoffs, he would have added a center. Which position would you improve?
– I’d also probably think about adding a 213-215 cm tall center so the team was better on the glass and defense against talented guys like Moustapha Fall. It’s no secret to anyone that we’ve had issues on the glass this season. That’s why we exchanged Dee Bost for Andrew Harrison. Our lineup added height and with the right scheme, it’s easier to defense against big men in the low post.

Nonetheless, our roster is balanced now. We have a mobile, athletic team, excellent chemistry. Everyone is used to the workload and sometimes even ask to stay after practice to play more and get shots up.

– In April, Khimki-2 won the VTB Youth League. Did you follow the tournament?
– Yes, I followed and I was very happy that our youth team came out on top in its age group. We need to develop Russian players. As head coach, I’ve helped bring Ruslan Pateev, Stanislav Ilnitsky and Alexander Zakharov up from our youth team. This season, we invited Maxim Barashkov and Dmitry Kadoshnikov to practice with the senior team. I hope the list will only grow.

– How do you relax after games?
– There’s almost no time to relax. I often watch other games, track stats and study strategy. My colleagues also have a huge amount of work when it comes to collecting information. People don’t see it. For them, all that matters is the result. Did you win or lose? For example, after the series with Astana, we will need to immediately begin preparing for UNICS and think about how to change our approach. That takes a lot of time.

Plus, my family is in Lithuania. I live here alone. I don’t go out for entertainment or to restaurants. I rarely go to the movies. If I have time, I read or watch TV. I especially enjoy Comedy Club and Ural Pelmeni and shows that don’t wear you down with politics or global problems. “In the summer, I want to get away from the conversations and attention”

– Have you thought about what you’ll do this summer?
– I know for sure that I’m going to fish and hunt. It’s a lifestyle. My favorite toys are my fishing reel and gun.

I think that I’ll meet up with friends, too. A lot of them have their own private fishing. I want to grill kebabs and drink beer with them, which I never get to do during the season.

I know that I won’t go to a resort. I fly enough during the season, so I leave Turkey, Spain and Miami to the young guys. And the weather in Lithuania is fine. My house is in the woods. I want to get away from the conversations and attention, because in my work I deal with a lot of people.

– What’s your biggest catch?
– Probably a sazan and shchuka, both around 8 kg. I’ve never had a catch like Arvydas Sabonia. He pulled in a 100-kg marlin on the Maldives once. I also care about how many I catch, not so much the size. Sitting around for two days to catch one fish is not for me.