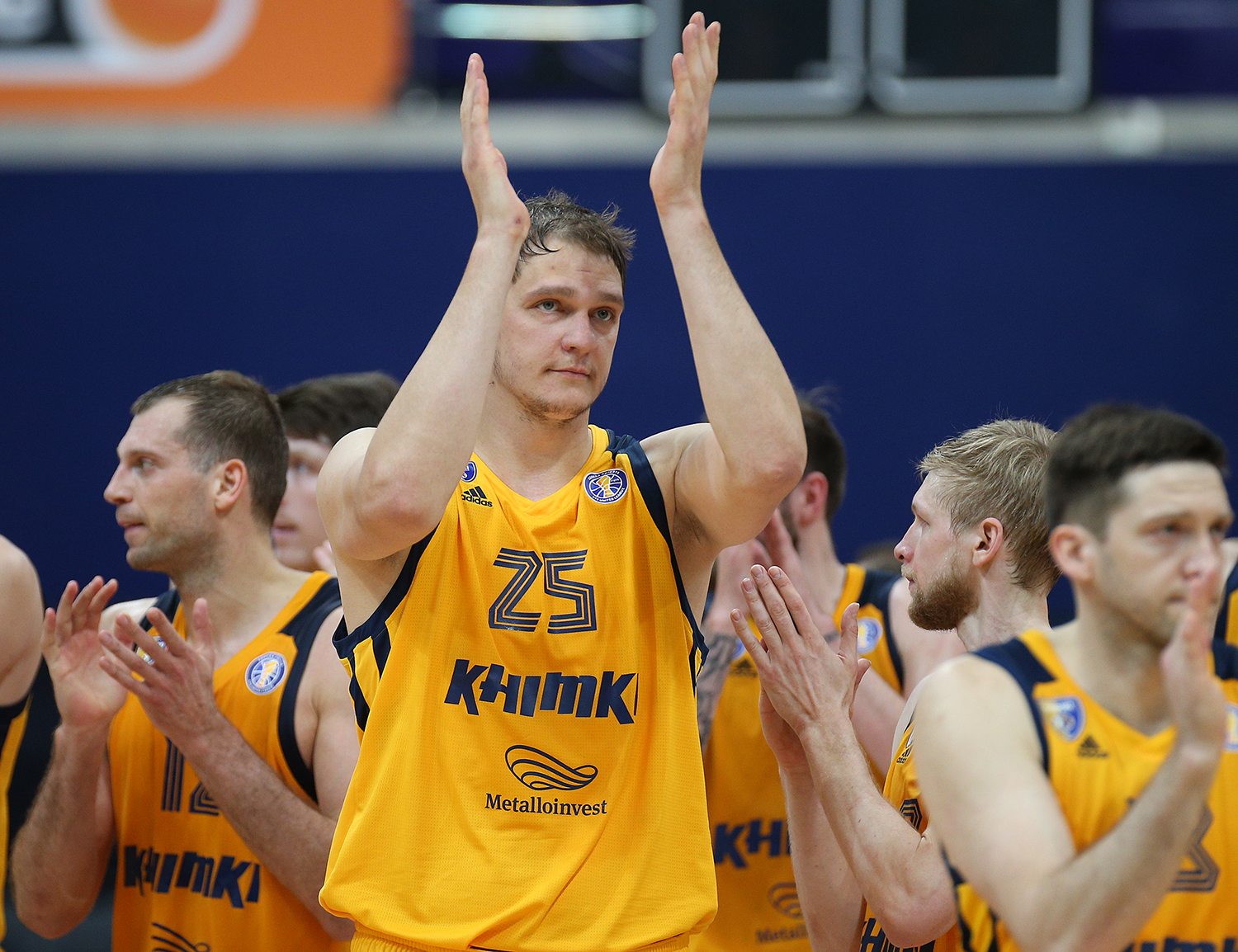 2 weeks left in the regular season!

Mozgov comes back to Khimki in time

Timofey Mozgov signed with Khimki before 2018/19 season. However, Russian center hasn’t played a single game for his hometown team.

A day before the game against Enisey rumor said Mozgov can come back to the court. The center has spent over 1000 days without official basketball! Khimki confirmed the information quickly announcing Timofey’s debut.

Mozgov went off the bench and gained first points in one of the first possessions from the free throw line. In the second half center played pick’n’roll with Ponkrashov and made a highlight reel for the first time in 3 years:

In 15 minutes on the court Mozgov scored 6 points and 6 rebounds. Timofey came back to Khimki just in time as Khimki’s starting center Jordan Mickey is off due to knee injury, he may not step on the court this season.

Despite the roster issues, Khimki clinched play-offs. Actually, they can be 5th or 8th by the end of the regular season. It depends on the end of the season: Khimki have to spend 4 games in 13 days, against Nizhny, Kalev, Tsmoki and Avtodor.

However, 5th spot is hardly achievable, Nizhny are there and they are in good shape.

Zoran Lukic squad don’t lose this spring, the victory in Perm was 5th in a row. The game wasn’t high-scoring, the teams reached 50 points only by 4th quarter. However, it can be explained: PARMA are striving for making play-offs, NN not only defending 5th place, but even try to get higher.

Zoran Lukic noted that the game was tough for both teams and wasn’t really spectacular. The main reason for Volga victory – Kasey Shepherd. 26 points, 4/6 threes, 2 steals, the guard became the star of the game at Molot:

The fact that Kasey is Nizhny’s best player on current period is proved by Champions League. Recently, the American was named CL play-offs MVP!

On Friday, Krasnoyarsk celebrated breaking 5-game losing streak. Although Enisey are not trying to get into play-offs anymore, they still can influence the final standings: their victory over Avtodor they really helped PARMA.

Saratov led after the big break, increased the gap to 9 points and were moving confidently to the victory in Krasnoyarsk. Enisey managed to pull themselves together via Tyus Battle. 2021 VTB League slam dunk contest champion reminded that fact once again:

After this dunk Krasnoyarsk got alive, made 10-0 run and shocked Avtodor stealing the victory on last minutes – 86:85. Saratov captain Markel Starks, who was attempting for the win took the blame, “We did our best and played as a team. I missed the game-winner and take the blame”.

Thus, play-offs situation for Avtodor got more complicated. Situation isn’t fully in Saratov hands: they have to not only beat PARMA and Khimki but hope for Perm losing in all games left. PARMA will play against Nizhny, Zenit, UNICS and Avtodor themselves.

CSKA and Loko prepare for the game

With 2 weeks left the standings aren’t clear yet. UNICS, who are 2nd, have a little advantage, while CSKA and Lokomotiv-Kuban are fighting for the 3rd spot.

This weekend CSKA and Kuban took similar wins: the opponents were fighting in the first quarter, but by the half time the games were almost decided. CSKA were up ahead Astana by 18 points by the half time, Loko – by 15 points in Minsk.

On Saturday, probably, the most interesting game of the season takes place: CSKA will visit Krasnodar to decide, which of the teams will make top-3. 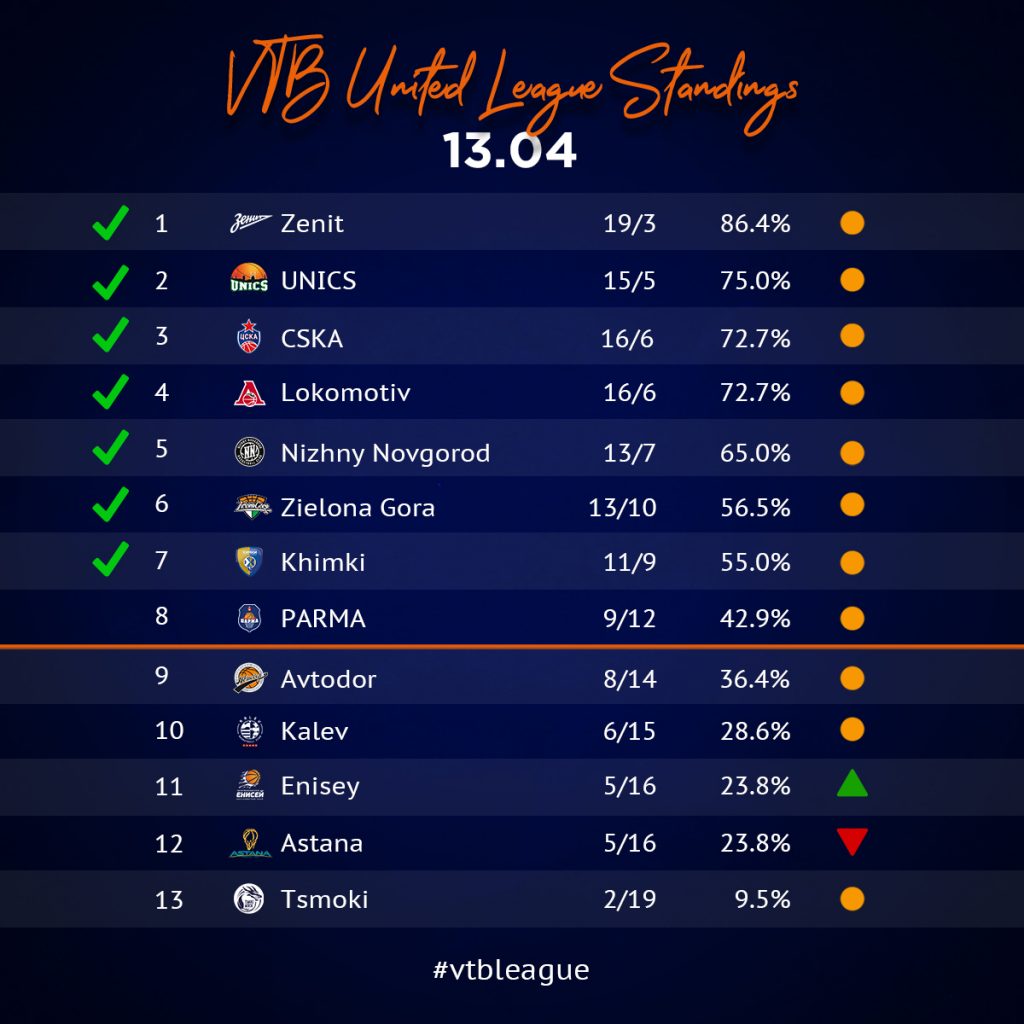