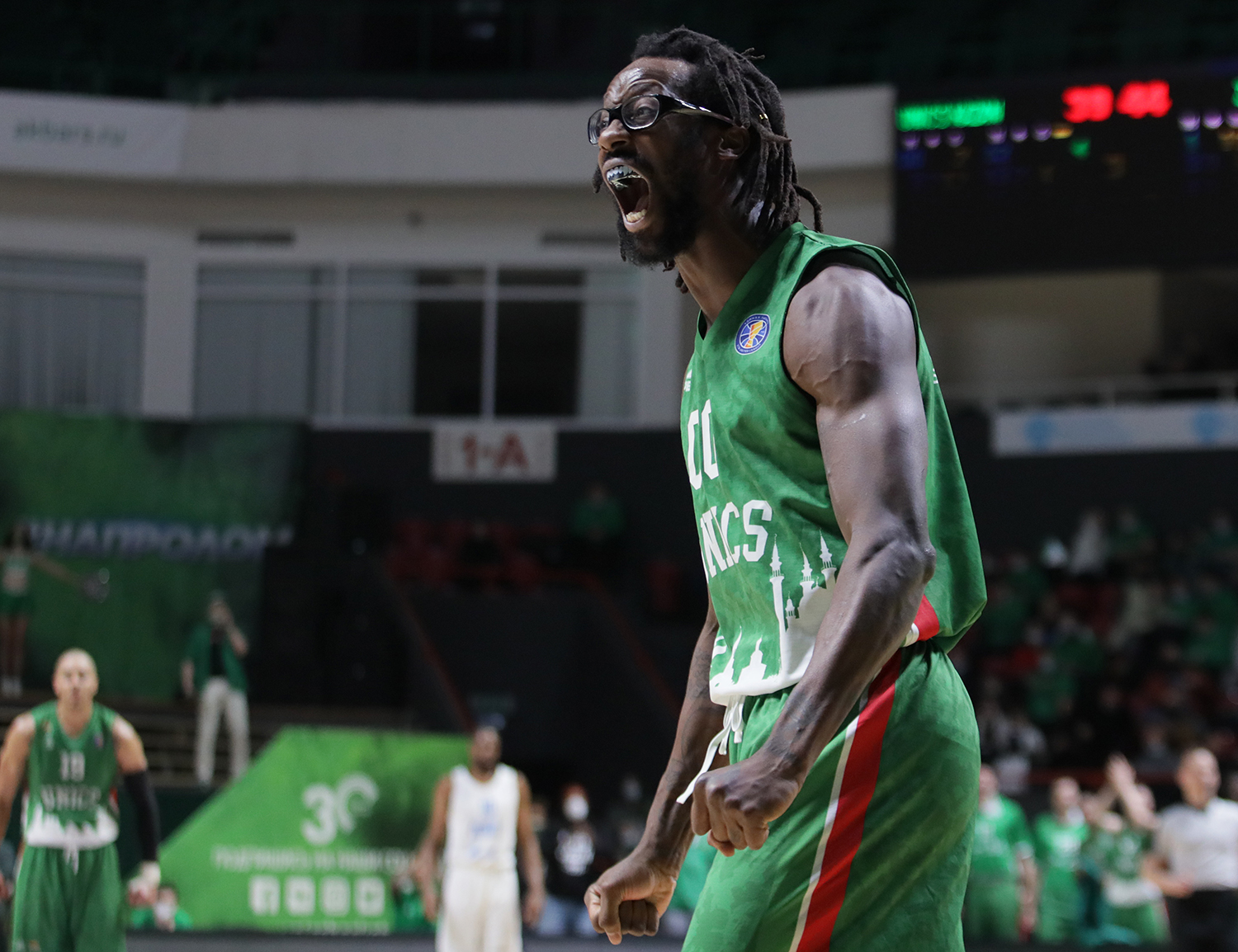 Almost 70 games, game-winners, sensational results and not less sensational trades, first ever basketball musical in Moscow, this United League winter was full of events. Recalling main of them in last three months.

In the late December UNICS lost to CSKA on the  road. Kazan looked in Moscow struggling: were down by 14 points, weren’t supporting their leader Isaiah Canaan who hit 36 points.

Since then UNICS won all of their further games. 9 if only United League is considered, 14 including Eurocup. In addition, there were only one opponent off the play-off zone, Tsmoki-Minsk.

The victory over Zenit by the All-Star looks like special achievement: UNICS set tight defense, stopped Petersburg offense and then won via Jamar Smith’s buzzer-beater.

Jamar is UNICS’ best player in 2021. The guard all of 9 games in January – February, hit 2 fame-winners, against Zenit and Zielona Gora and finished this winning streak with 15,9 points per game. No wonder Smith was named United League January MVP.

Kazan team chemistry is now at a high level, this is what coach says and players prove supporting each other in comments. The mood is also OK in UNICS:

“Mother calls ypu asks who you play against. Yous say – against Minsk. She says – oh, you win. Because theoretically you’re better. Then wife, daughter calls and say you win. We step on the court with the attitude of our friends, wives, mothers, daughters. Even we ourselves start to think we win. Bu this “yes, it’s cool” is the biggest illusion, the biggest disrespect to yourself”

In the beginning of the winter, CSKA looked like an unstoppable red-blue machine with 6 successful games, and then…

Then the reigning champions faced new problems. While Will Clyburn’s injury wasn’t a huge problem in December, the case of Mike James and simultaneous injuries of Milutinov and Shengelia kicked Moscow out of winning track.

First, CSKA lost in Poland. Zielona Gora were not afraid of the big opponent and found their weaknesses to get the first win over the Army club.

6 days later CSKA lost again. This time they were beaten by Kalev at home. During the 4th quarter, Dimitris Itoudis’ side were leading by 14, but allowed a comeback when the Estonians scored 39 in 10 minutes to make a sensational win – 102:107.

CSKA was in a real trouble. Now the champion is being taken apart by the worst team in the VTB league 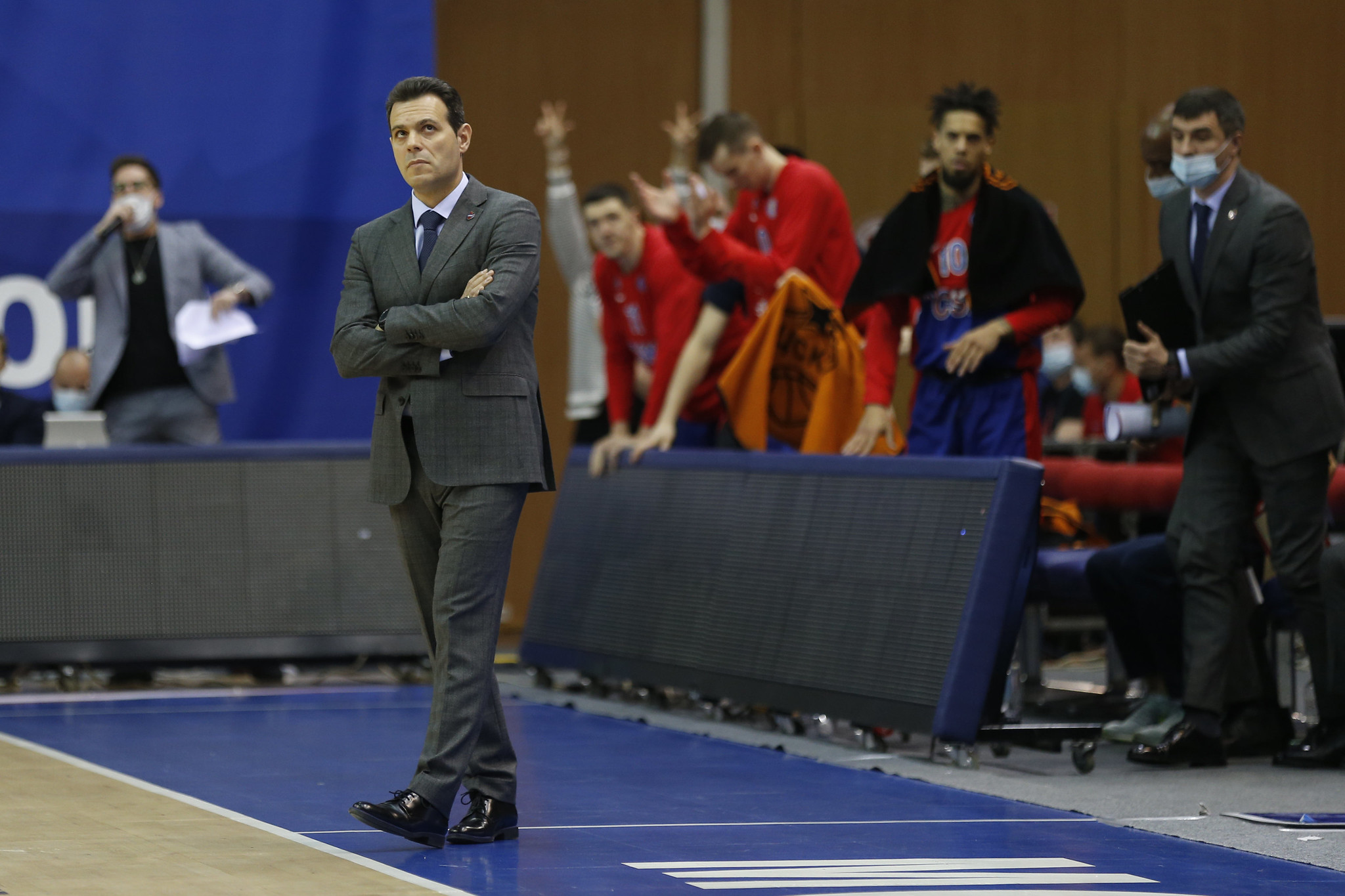 But even this wasn’t their last defeat in February. Zenit came to Moscow one day before the All-Star Game and proved to be the best team of the regular season. Yes, CSKA led by three-pointers of Voigtmann and Hackett almost made it to the OT, but ‘almost’ is not a win.

Each of those February losses was historical for CSKA. They’ve sufferred their first ever losses from Zielona Gora and Kalev. And with Zenit, they lost the fifth game this season which has never happened in CSKA’s 11 year in VTB League.

After February, CSKA dropped down to the 3rd place. As of today, it is not already a matter of winning the regular season, but a question whether CSKA can chase UNICS with 3 wins apart.

Zelena Gora are an example of how a team with a small budget can be the kind of opponent that no League front-runner would want to face in the playoffs.

The roster changed drastically over the summer, leaving, it seems, only the aging veteran Lukasz Koszarek and Marcel Ponitka (who left in the middle of the season for PARMA). Zielona Gora started the season with 4 straight losses. Gora also plays in the Polish league and plays at least 2 games every week (from September to March they took part in 49 games already, of which they won 39). In the winter, head coach Zan Tabak temporarily left the team due to the death of his mother. Immediately after the All-Star Game, main star Iffe Lundberg moved to CSKA.

And Zielona Gora continues to win despite the status and merits of their opponents. At the beginning of January, only Jamar Smith saved UNICS from a home loss to the Poles. Major fatigue – 4 games in 8 days – may help explain their loss to Nizhny Novgorod in overtime. That’s all the Gora failures since mid-December.

The victory over CSKA was the loudest not only in the season, but also in the club’s history. The game in Poland was spectacular, while the ending with Kris Richard’s game-winning shot was unforgettable.

In their first game since the All-Star break, Zielona Gora defeated Khimki, despite Alexey Shved’s 36 points – but that may have come as little surprise to anyone. That said, the Polish club’s budget is 30 times less than Khimki’s, which Executive Director Janusz Jasinski tweeted after their win over the Yellow and Blue.

There is no doubt that Zielona Gora will be in the top eight in the regular season. More interesting is whether or not Zan Tabak’s team will be the terror of the favorites in the playoffs.

Khimki changed their head coach, but are still fighting for a playoff spot

Khimki may be the main newsmaker of the season, but it’s unlikely that they are happy with the news reports. Rimas Kurtinaitis was fired as head coach of Khimki in mid-January following an unusually high number of losses, with Russian coach Andrei Maltsev stepping in as a coach.

Victory under Maltsev didn’t take long, as Khimki defeated PARMA 72-69 in their second game. Maltsev also had a win over Astana before the All-Star Game, 82-77.

Overall, though, Khimki are in a very difficult situation: Three internationals – Jerebko, Monroe and Bertans – left the team, Booker hasn’t played for Khimki since January 3, Jovic played a total of only three games during the season, and Timma wasn’t even on the bench in the loss to Zielona Gora.

Khimki themselves are in 8th place with a negative balance of wins and losses, and the question now is not about moving up in the standings, but rather about making the playoffs. The Moscow Region team’s schedule isn’t exactly easy. In the near future, Khimki will face Zenit, CSKA and Zielona Gora. 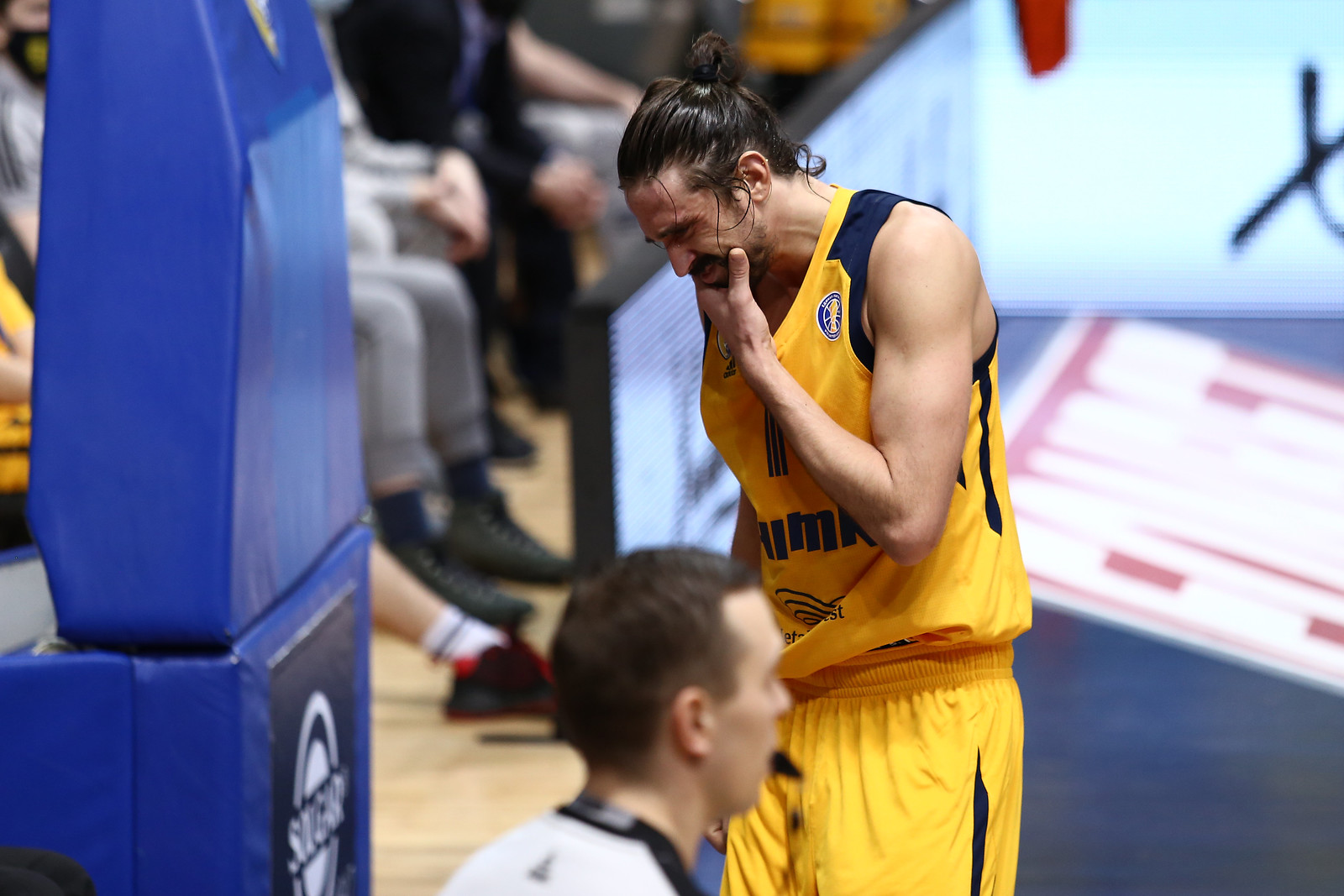 Anton Ponkrashov’s return to the League was good news. The guard signed a contract with Khimki and made his debut for the new team in February. Khimki became the 7th team for the Russian in the VTB United League.

In mid-February the United League All-Star Game was held in Moscow. It was already the 5th All-League game in the history of the League. This time the League decided to move away from the classic basketball format as much as possible, combining sports with musicals.

Of course, we didn’t forget about basketball and the traditional contests. Tyus Battle from Enisey won the dunk contest:

Artem Komolov of Nizhny Novgorod won the title of best sniper by beating Astana’s Jeremiah Hill in the final three-point contest:
And Vitaly Fridzon shot 57 points off his turnovers and led the Russian All-Star team to a big win over the World All-Star team, 183-162.

There’s no doubt that Nikita Mikhailovskii is the top talent in Russian basketball and one of the most promising players in the United League. This season the Avtodor guard has the best numbers of his career: 10.5 points and 3.2 rebounds in 21 minutes on the floor. At the same time the Russian is shooting with quite a good shooting percentage: 57 percent two-point shooting, 42.4 percent shooting from beyond the arc and 84.1 percent free throw shooting.

Mikhailovskii is only 20, but he’s already surpassed the 20-point mark twice this season and set a personal best in a game against Kalev in mid-January with 24 points on 8-of-13 shooting. Not counting the 2021 All-Star Game, of course, where the guard scored 30 points.

Shved is already by far the best in the League in points (3,211) and assists (884). Now the guard is close to achieving yet another milestone – becoming the No. 1 double-double player of his career. Shved finished with double-digit points and assists twice this season alone, and his most recent double-double, against Loko in February, moved Alexey into second place in the League. Shved is only 6 double-doubles away from Frank Elegar, the leader in that rating!

Will the Khimki guard be able to rewrite his statis history this season?

There are 9 clear contenders for 8 playoff spots

The battle for the remaining three spots would be fought until the final four rounds. Near the end of the winter the playoffs will be contested by 4 teams: Avtodor, Khimki, Nizhny Novgorod and PARMA. All four contenders were active on the transfer market recently and are ready for a month-and-a-half race for the playoffs. 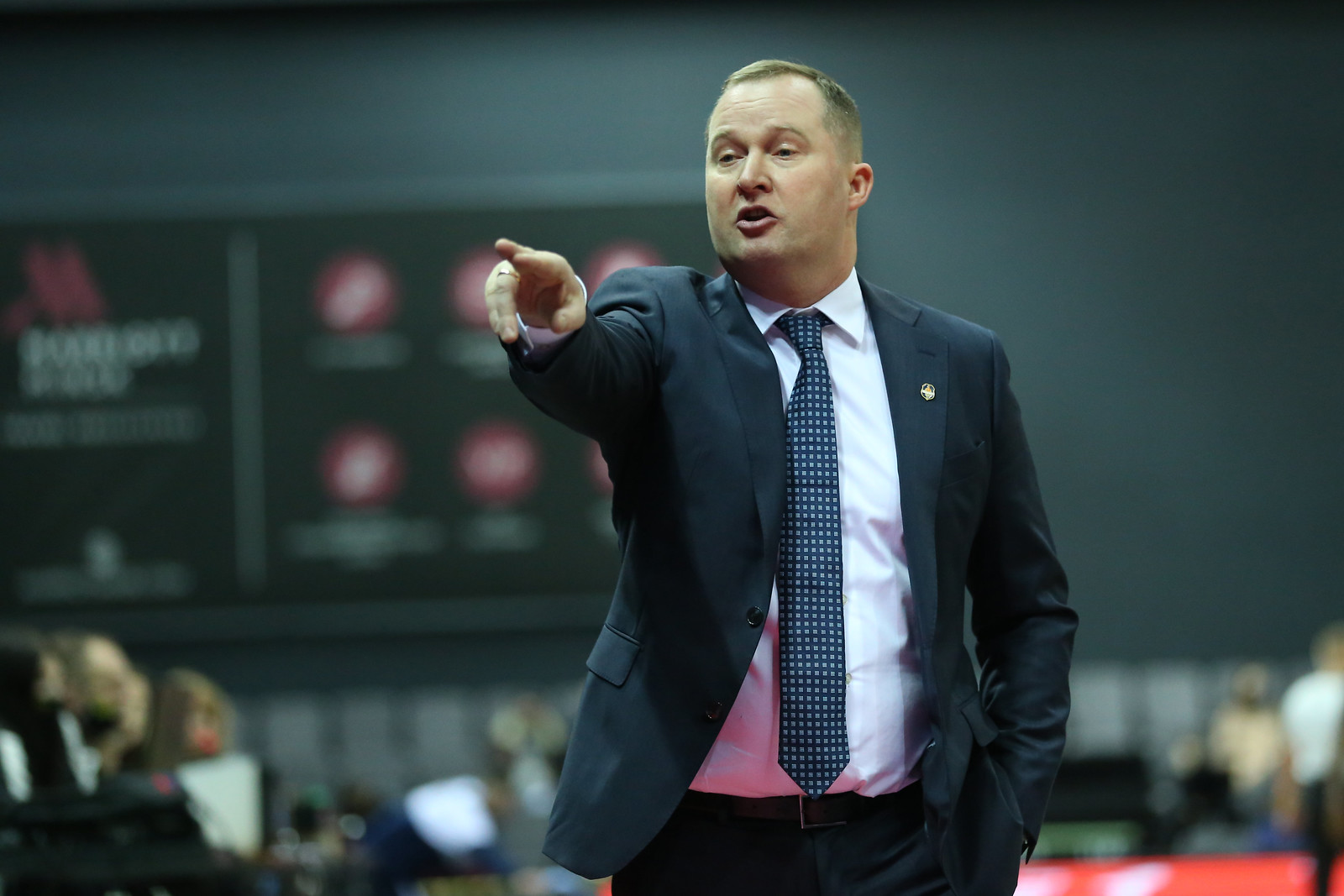 Enisey, Astana and Kalev are three wins behind eighth place, while Tsmoki have only a theoretical chance left. Of course, Russians, Kazakhstani and Estonians can still clinch a spot in the Top-8 from one of their rivals, but they’ll need to not only play out their rest of the regular season perfectly, but also hope for the other contenders to succeed.