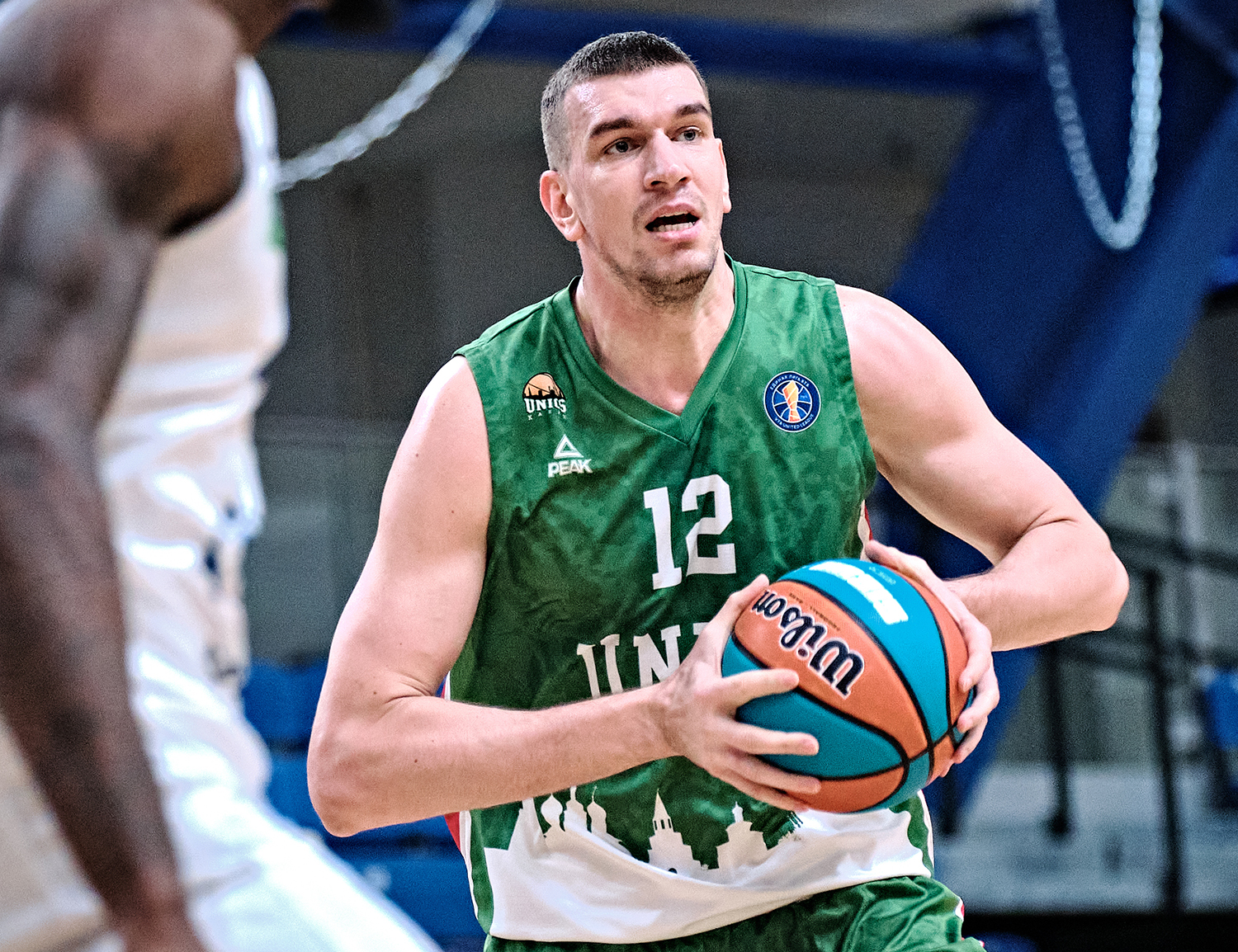 UNICS center Artem Klimenko gave an interview to our website in which he shared his impressions of the upcoming series with CSKA, named the best way to take a break from basketball, and also talked about why some fans write offensive messages to him on social media.

– This season UNICS made it to the Eurocup finals and reached the VTB United League finals. Can we consider it a successful season?
– I think, perhaps, that the season was very successful for us. But it’s not over yet and we can be even more successful.

– In the VTB League finals you’ll play against CSKA, which you recently called the most difficult opponent for your team. What’s the biggest threat to the Army team?
– CSKA is an uncomfortable opponent for everyone. If you look at the history, the Army team hasn’t lost a playoff series in 17 years since 2004! And CSKA’s main threat is that they are strong in many aspects. But we also have our strengths; I don’t think we are an easy opponent for CSKA. So both teams have a chance to win the championship.

– How much of an impact on the series will UNICS’ home court advantage have?
– That’s a big plus for us, but we mustn’t forget that the teams that started the series on the road won the semifinals. Zenit really took advantage of the home court in game two, while we should try to win both of our first games in Kazan to at least get one more home game. I think that the outcome of the final series will very much depend on the outcome of the first two games.

– CSKA has a lot of big men on the roster – Tornike Shengelia, Johannes Voigtmann, Michael Eric, Joel Bolomboy, and Nikola Milutinov is on injured reserve. Who is the most dangerous for you?
– I can’t single out just one. Each of them is a very valuable player in his own right. Bolomboy is dangerous on pick-n-rolls, Eric is great on rebounds, Schengelia is comfortable going 1-on-1 in the low post, Voigtmann is a great pick-n-pop and three-point shooter. They each have their own strengths that they skillfully exploit. We’ll have to adjust to each of them individually.

– You played against Geoffrey Groselle in the quarterfinals and Drew Gordon and Reggie Lynch in the semifinals. Which of these players did you like the most?
– Again, it’s very hard to single out just one of them. Groselle is brilliant in paint, but we were able to shut him down. Gordon and Lynch are heavily dependent on the point guard, and Mantas Kalnietis never played in the last series, which made life easier for us.

– Which VTB League center is the most diffiucult to guard?
– It was very interesting to play against Nikola Milutinov of CSKA. He played great under the basket and helped his guards all the time, shutting down opponents.

– Nowadays in modern basketball we see centers that often shoot the ball, like Nikola Jokic, Johannes Voigtmann and others. Have you ever tried that role? Or do you always focus only on the paint?
– When I have an opportunity to pass to an open teammate, I do it. I don’t think that’s noticeable in my game because I don’t spend that much time on the court. But I’ve been playing a little bit more in recent games and I think my passing game has improved as well.

– A few years ago you could have signed with the Utah Jazz, who won the NBA regular season this year. Do you follow the American league?
– Not very closely, actually. I’m more interested in European basketball and Russian players. I just don’t have time for the NBA.

– Three years ago you said that you weren’t done with the NBA. Is it the same now or has something changed?
– I’m not a veteran yet, I’m not even 30 years old. So I wouldn’t say that history is closed. Anything can happen. 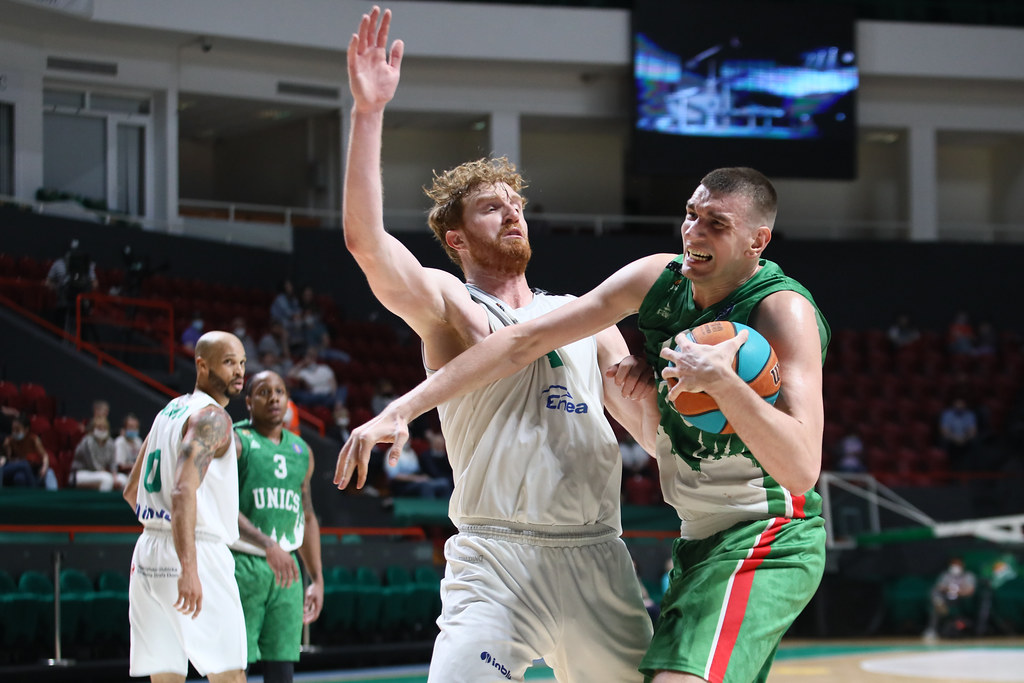 – It is often said in modern basketball that “the center is a dying position.” What is your reaction when you hear that statement?
– I’m cool with it. Maybe in the NBA it’s true, but in Europe nearly every top team has big players who are over 210 centimeters tall and weigh over 110 kilograms. If the position were endangered, there wouldn’t be this many centers today.

– Are there any cases when fans write personal insults after games?
– Yes, sometimes. Mostly the fans who bet in the bookmakers’ offices write that. For example, bet money on our victory, and we lost, and then with foul language and insults they wrote in personal messages, how bad we were.

– And did you reply to them?
– Yes, but in a completely different way: “That’s your problem, I didn’t ask them to bet money on us. This is the choice of the people, so they need only be offended by themselves.

– What are the three best ways to relax from basketball?
– You don’t have a lot of free time during the season, you always want to spend it with your family. After the season is over – the beach, fishing and, of course, barbecue!

– UNICS is a very friendly team this season. What is the main secret of the good team chemistry?
– Everyone understands their goals, everyone plays their roles perfectly, and everyone enjoys it. In addition, the guys are very sociable and friendly. Even in spite of the language barrier, everyone tries to communicate, joke and support each other. It is very important. We also get together regularly off the court, which I think increases the team chemistry.

– What was the most unusual place you went with your teammates this season?
– For one of the players’ birthdays we went to a bathhouse and the Americans were forced to take a steam bath with brooms. They liked it so much that after that they went to the bath house several more times, in fact, they themselves asked “When will we go to the bath house next time?”

– Who is the main funnyman on the team?
– John Brown comes first, followed by Okaro White and Jamar Smith, then Jordan Theodore, and then a little bit of everybody. These guys stood out because they shout and joke the most in the locker room! They’re the only ones you can hear!

– Before the final series, basketball players share their thoughts on what they are willing to do if they win championships. What are you prepared to do if you win the VTB United League?
– I answered a similar question about five years ago, then I said I’d shave my head. But now I don’t think I’m ready for that, I would look strange without any hair.

– But there are other options – a tattoo, a parachute jump…
– No, no jumps, that’s too scary! Still, I’m not going to promise anything at this point, because if I win the championship, I’ll have to do it. When we win the final series, I’ll definitely let you know what I’m willing to do.