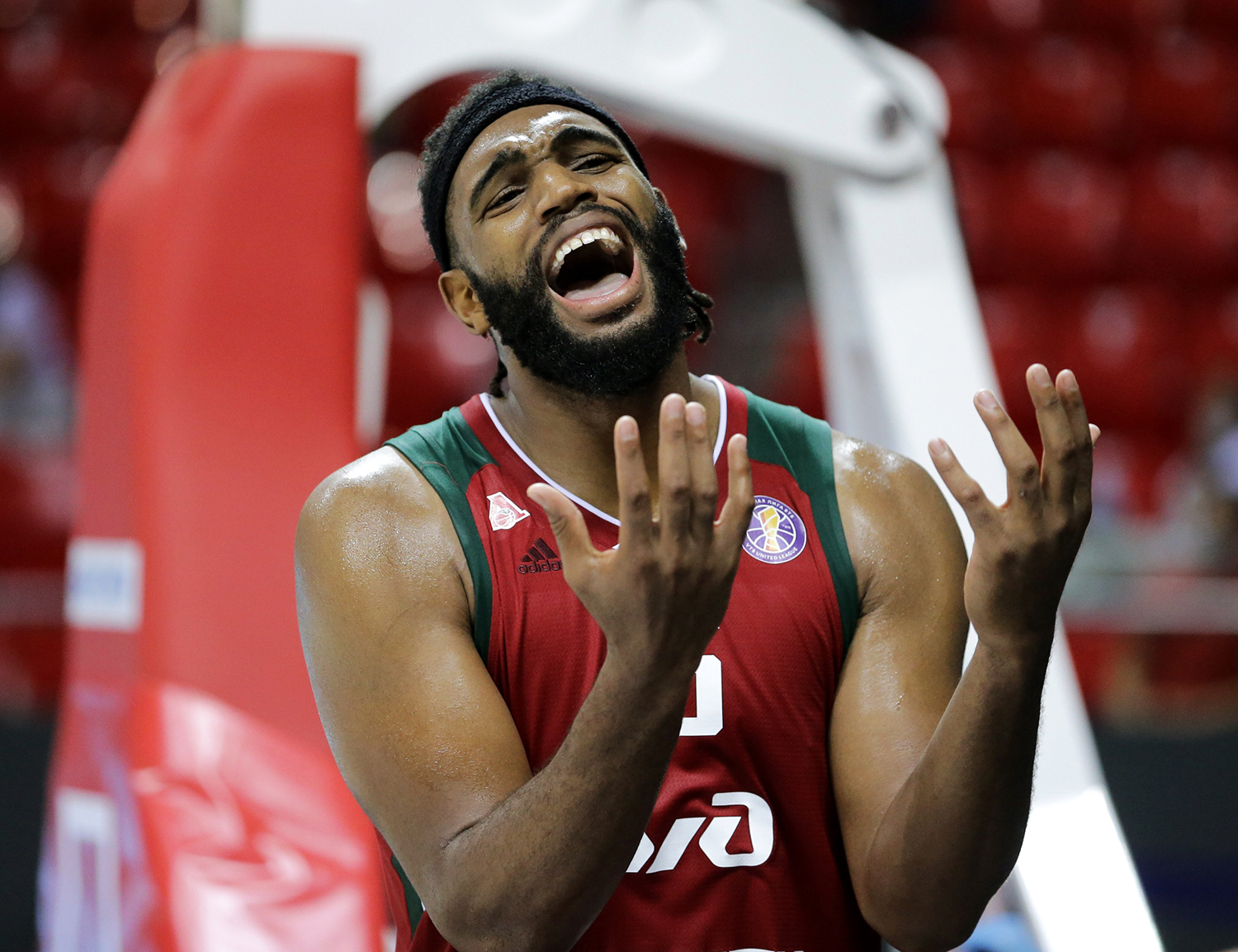 This season, Lokomotiv’s center demon strates phenomenal efficiency in both VTB United League and Eurocup. He leads season’s rankings in PPG and rebounds even competing with a number of extraordinary centers. At the moment, Alan Williams is injured after game vs Enisey, and everybody wishes him soon recovery.

In this interview the American tells us how he adapted to Russia, NBA plans and childhood dreams.

This is your second year in Russia. What does it feel like? Is it work only or some sort of adventure?
I think adventure is exactly what it is. Life is an adventure anyways. You have to try new things and be in new places. Today life in Russia is a part of my adventure and my life. I’m happy to be here and I enjoy every minute of Russia.

You play for Krasnodar’s Lokomotiv-Kuban. Since you’re from Arizona, Russian South must be a comfortable climate for you.
I like Krasnodar, the weather is one of the best in Russia. But now it’s pretty cold though, this week it’s been two or five degrees, sometimes even below zero. This is not like Krasnodar, but yes, I like it warm. All in all, we play basketball in closed venues, so as long as the hall is warm I don’t care where to play.

Russia is very large, and the same applies to the USA. You travel a lot during a season. What’s your favourite: plane, trains?
I play for Loko, and Russian Railways are our sponsor, so I should say trains are the best. But we’ve never travelled by train here. When I played in China we used trains and I liked it. No turbulence, enough room. I’d pick trains if I could, but our team chooses flights. But you know, flights are not that bad.

This season you are extremely efficient. You can be called a double-double machine. Do you know you can become VTB League All-Time leader in double-doubles?
Never thought of that, this is insane. 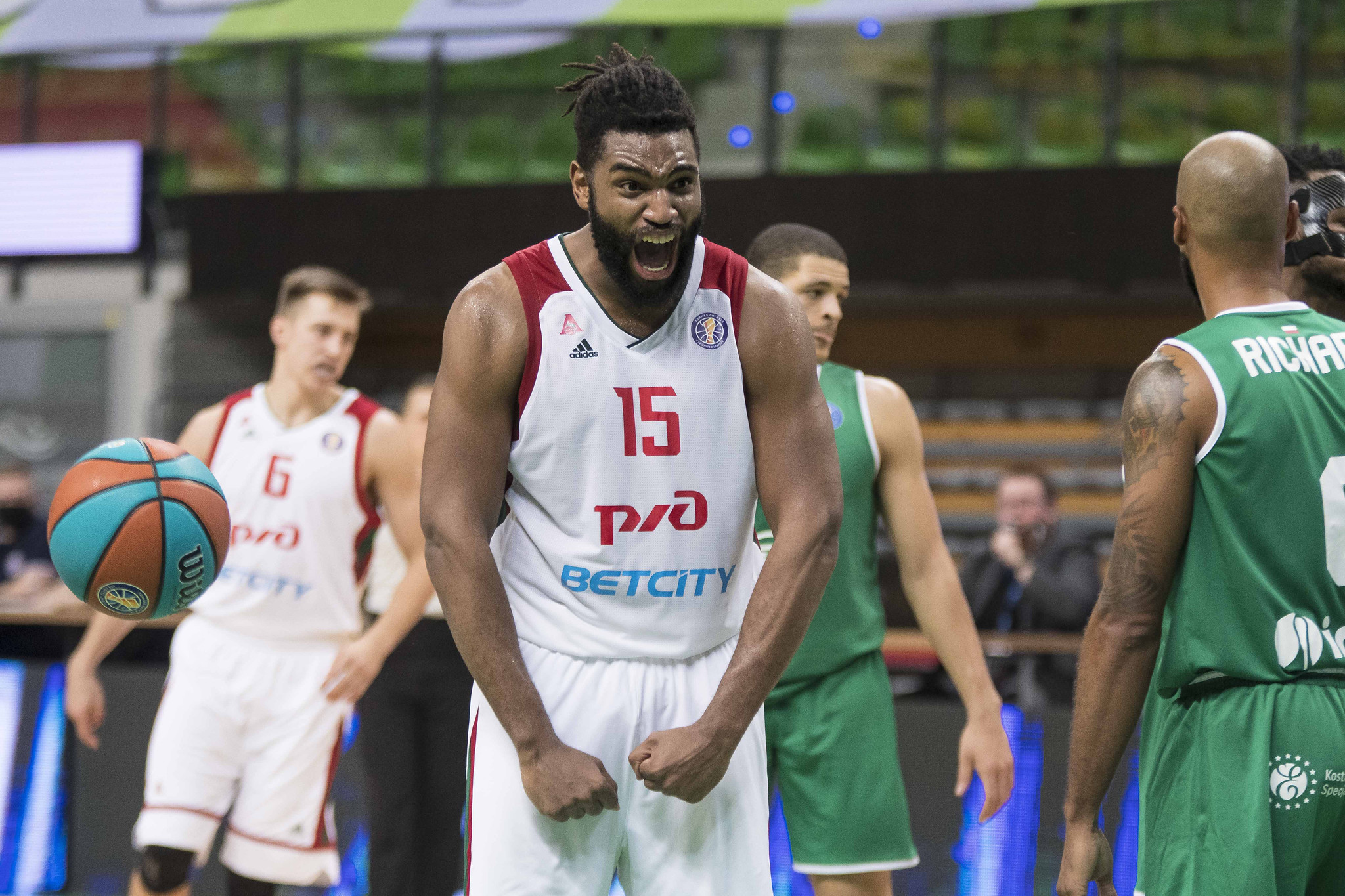 But it’s highly probable if you keep your pace. So, you’re the best in PPG, rebounds and efficiency points. How do you do that? Is it team’s effort, or you know something that we don’t?
Obviously, it’s the team. My partners help me score by getting the ball to me. Rebounds is my element, I’ve always been good at it and enjoyed the process. Of course, if I score and rebound a lot this will affect my efficiency stat.

I have to stress out that I’m very thankful to my teammates and coaches. I play like I should and the team does great job using my best qualities. I could have scored and rebounded with less assistance from the team, but it goes way better with them. This year we have a selection of really great players.

You tweet a lot and sometimes we see your posts in Russian. How is learning process going?
Oh, I try to use Russian as often as I can. I learn new words, had some classes. ‘Davai-davai’ is my signature phrase, I always use it when I score. Tha fans like it, the teammates like it. I can ask ‘How are you?’, I know my number, basketball terms like ‘right’ and ‘left’. I must be a better Russian-speaker than an average American. Surely, I get to practice a lot – teammates, taxi drivers, waiters. A bunch of opportunities to improve. 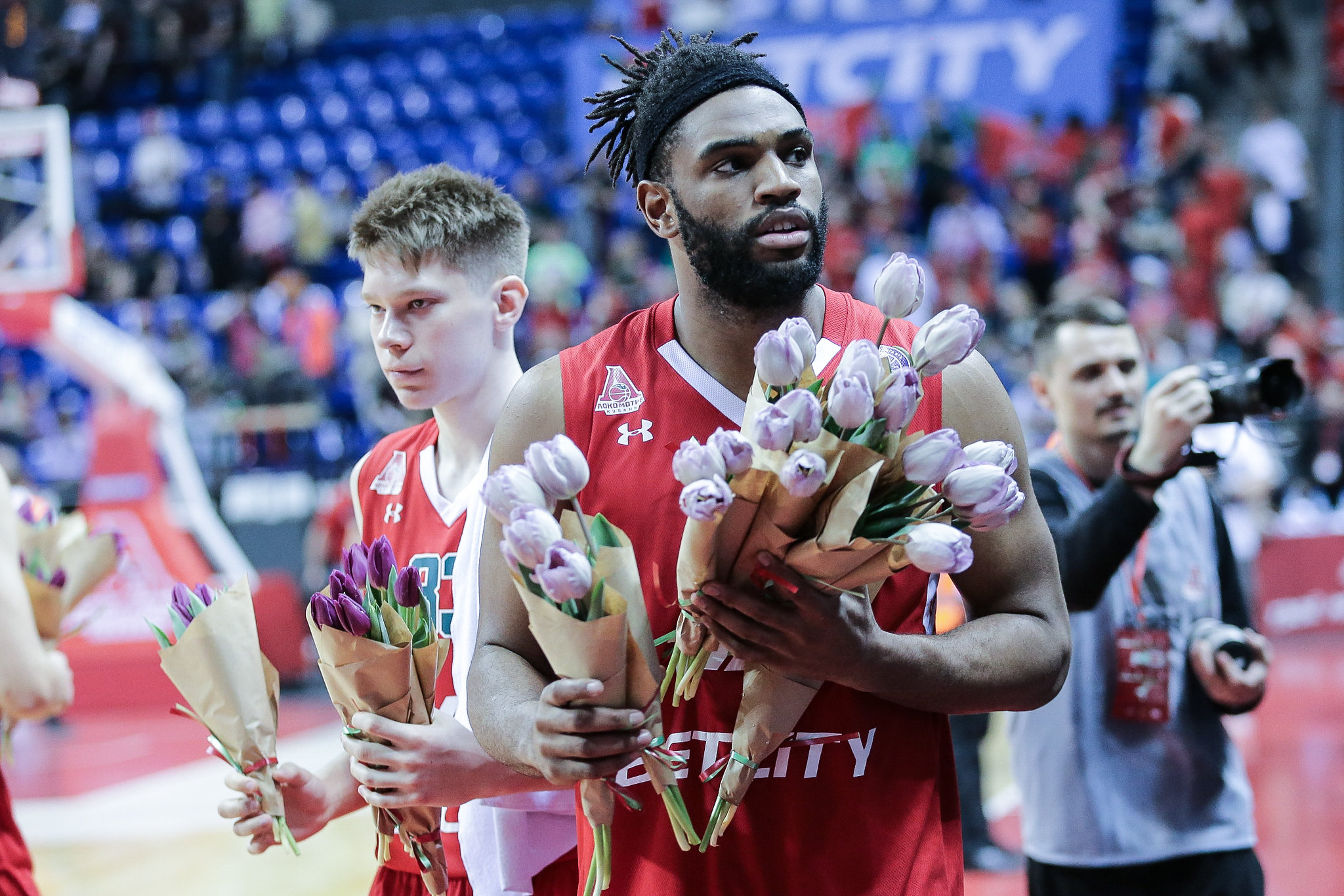 You do seem to like this ‘davai-davai’. Who taught you that?
It was last year, someone from the coaching staff. When we get on court, we do high fives, and the coaches motivate us, they say, “davai-davai”. It’s like a battle cry. I like it, it get’s you energized for the game, you know the match is important and it’s time to perform.

So, Russian cuisine. What’s your favourite?
I live in Krasnodar, hence a lot of seafood. I can eat a full dish of shrimps. By the way, that’s Krasnodar where I learnt how to peal and eat them. I can’t say I’m a huge fan of traditional Russian food like borsh, tried it a couple of times. But I’m always ready to try something new.

Your twitter account is Big Sauce, and that’s how the teammates call you. What’s the story?
My younger brother Cody made that up. He’s a firefighter in Phoenix. We use ‘sauce’ to say ‘style’, and the brother thought I had it. It all started in twitter, and then the media took it while I was in college.

Is it safe to say that Big Sauce is one of the best centers in Europe? If so, who else on the list?
I wish I could say it, but it’s not like me. I’m confident about my performance, I know I can face anyone, work a lot, create opportunities. But I haven’t achieved much in Europe, I had only year and a half here. This season is going well, I feel team’s support, but I can’t place myself among the best yet. You can call me one of the best if you want, I don’t mind!

Speaking of the best, I’d mention Greg Monroe. It’s his first season in Russia, but last year he was phenomenal. Milutinov of CSKA is great – he’s big, but moves a lot. You know, VTB League itself has a bunch of good centers. Khimki’s Jordan Mickey is more like a number four, but he’s very hard to guard. Devin Booker, Bolomboy who proved his ability to play in Europe. Willy Tavares and Brandon Davis are monsters. I could go on and on, because in Europe, every time you’re on court you face serious resistance. This is why I play basketball: competition, and the level is high here.

A month ago, your friend Jared Dudley commented one of posts of your European performance, “Should be in NBA. Plain and simple.” Any plans for comeback?
I try not plan that far. I focused on Loko and success in Russia. Of course, it’d be great to come back to the USA, I could see my family. But as I said, I like European basketball, and I think I can build a great career in here.

You spent three seasons in NBA’s Phoenix Suns of your home town. What did it feel like to play not only in NBA, but a be a part of your favourite team?

It was a dream that came true. I never even thought it could happen. This was a special time in my life and I shared it with my family and friends. Amazing feeling. The nearest and dearest were there every time I stepped on court. It was a blessing for me to represent my home town and I always try to do that (during the interview, Williams is in a Phoenix hat). I’ll never forget that time.

You had a bunch of G League games and recall them as ‘the good days’. Many fans think nobody wants to play there as it’s a dead end for a player. Care to change their mind?
Simple. It’s basketball too. I’m happy everytime I get on court. A lot of guys struggle with G League games, as it doesn’t meet their ambition and slows their dreams, but I think G League is vital for the NBA. I think it’ll gain more weight because it’s a great opportunity to show one’s worth.
I enjoyed G League. NBA people follow you, plus every G League team has a loyal fanbase. There’s a reason, those teams are located in small towns. There are no other professional teams, so the support is ensured which matters a lot to me.

What do you think of NBA without fans?
It feels different, but not that much. I watch basketball on TV, but not to see the fans. Yeah, they’re part of the game, create atmosphere and it felt different first time. But I believe NBA did a great job finishing the season, even without the fans. I know how happy the players were to play basketball in the bubble.

As an NBA fan, I was happy to see basketball again. As I know, the next season will start without fans for some teams, but I hope, the people will get there soon.

A little bit about you. Always dreamed of basketball career? As I know, you come from a lawyers family, your parents are related to law enforcement. Ever thought of following in the footsteps?
No, never. I’ve always wanted to be a basketball player. I really respect what my parents do, how much effort they put to become what they became. But it’s not for me. I was a sports guy since childhood, and even if basketball didn’t work out I’d try something in other sport. I’m lucky, as basketball is going well, so I need no plan B. Even after professional career, I can’t see myself doing law or something like it. 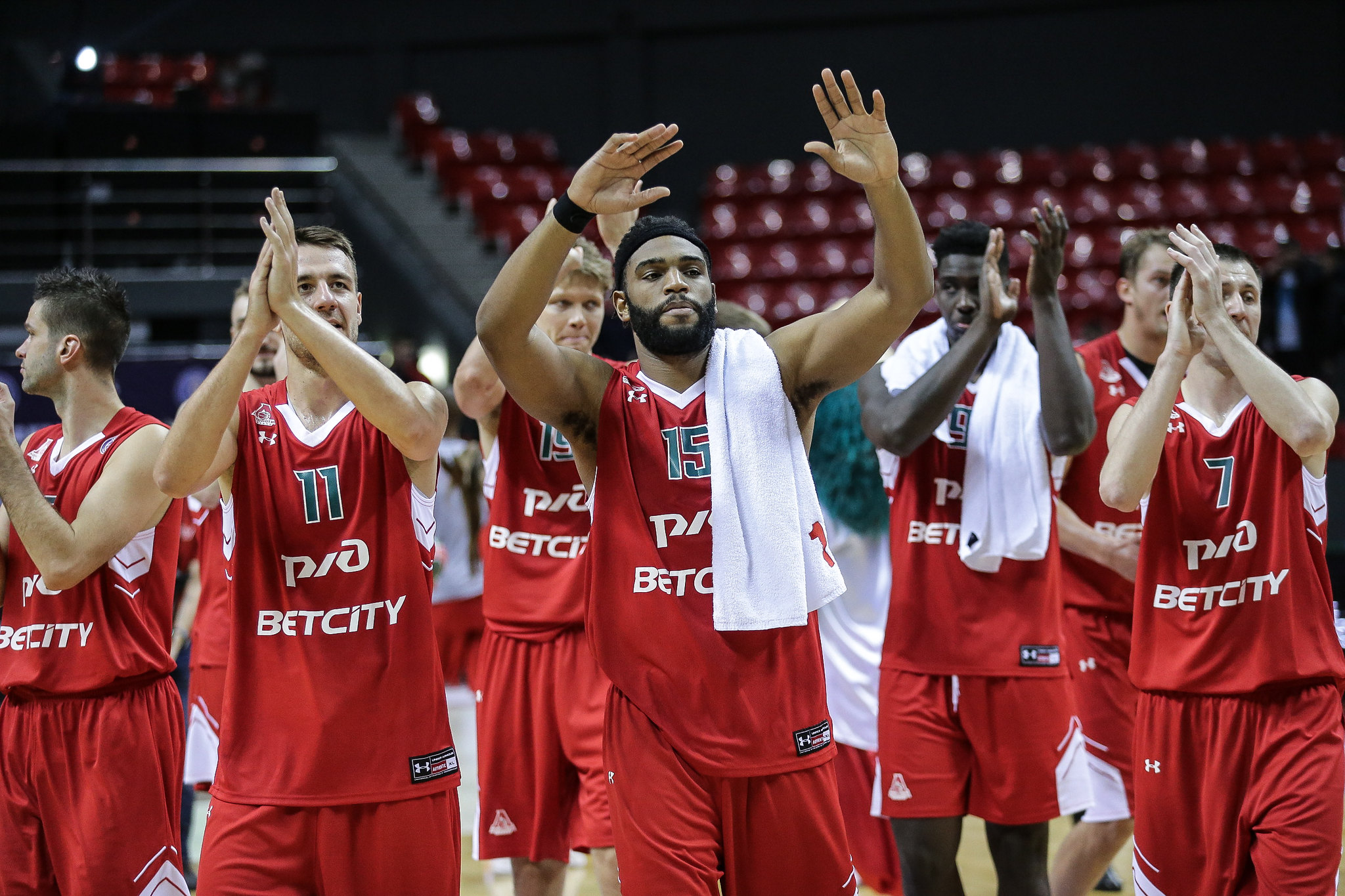 You are 27. Modern medicine and training process are so advanced that athletes can maintain high level until 40 and even more. Who are you? Young, veteran?
No, I’m not young. It’s been a long time since I got to basketball, I played in many places. I understand the game better and it requries experience. But I don’t think I’m a veteran, even though after some games I feel really old because my knees and rest of the body feel overall pressure. Training process and medicine help us play longer, so I plan to stay for a while.

So your best years are yet to come?
I think so. I have things to prove, energy and desire to achieve much more. I’m not at the peak and don’t feel like I’m showing the ultimate level of performance.