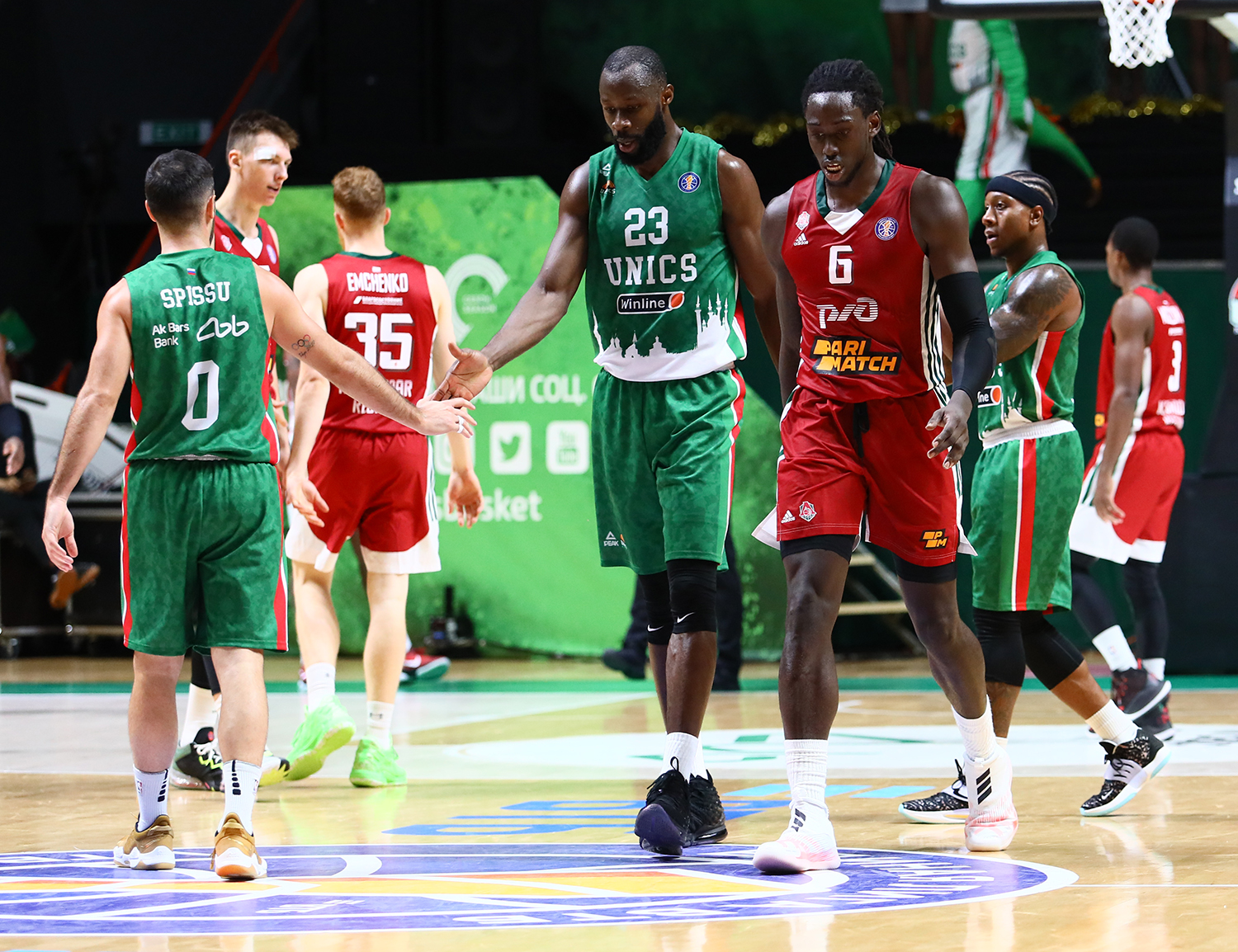 Game progress
UNICS and Lokomotiv-Kuban held their second face-to-face game in five days. On Sunday, the Kazan team got the better of their opponent in the SuperCup 3rd place game, and today the teams had a chance to open a new season. In a recent game, the Krasnodar team made 31 turnovers and allowed the white-green team to score more than 40 points in such situations.

Now, Loko started with two long-range hits by Stanton Kidd in the first minutes, who was soon supported by Darius Thompson. The guests quickly recovered score difference and by the half of the opening quarter scored 9 points after UNICS mistakes, easily taking possession of a double-digit advantage. Kuban team did everything: in addition to reliable defence and a constant threat from the perimeter, the red-greens scored points in the paint. Isiah Canaan’s and-one at the end of the quarter slightly improved the mood of the Kazan fans, but the discouraging 35:19 was still burning on the scoreboard.

Canaan continued to score at the start of the second quarter, UNICS tried to come back to the game (30: 39). But then an unexpected hero came to the forefront – Andrey Martyuk. The 21-year-old forward scored a 3-point shot and dunked, after which he caught the courage. The young Russian scored 10 points in 10 minutes and, with Eric McCollum support pushed the Kazan team to a distance – 57: 40 by the end of the second quarter. In the first half, UNICS realized only 30% from behind the arc and allowed 10 turnovers, Mario Hezonja had 1 of 7 from the field, Loko gap looked logic.

Velimir Perasovic had not coached since 2019 before joining UNICS, but during the break he showed that he had not lost his skills. The Croatian managed to radically rebuild the defense and motivate his players. For most of the third quarter, Lokomotiv was confident shooting 3-pointers. The moment in the middle of the quarter was symbolic, when Kazan team managed to trap opponents in two possessions in a row, after which Canaan stole the ball and ran into fastbreaks. UNICS returned the intrigue to the season opening game – 65:68 before the last quarter.

In the fourth quarter, Lorenzo Williams turned on, UNICS even briefly seized the lead, the opponents went to the end with a beautiful score of 77: 77.

The key point
In the last minutes, Browns duo started to work. First, John put UNICS ahead after two nice assists from his namesake and then Lorenzo strengthened the breakthrough with a 3-point shot: 89: 83 a minute before the final siren, the biggest advantage of the hosts that evening. Even a series of dunks by the restless Martyuk did not save Loko – the Kazan team that gained momentum held the lead and started the season with a win.

Hero
Lorenzo Brown. This evening, Kazan team several players showed themselves, who took up the leadership role as in a relay race. In the last minutes, Lorenzo became the main hero for UNICS, who did not let him down. The American has 22 points, 4 rebounds and 7 assists with 6 of 8 from the field.

Numbers
16-Andrey Martyuk has updated his personal best in the League. At the same time, the forward acted not only effectively, but also spectacular:

Comments
Velimir Perasovic, UNICS Head Coach:
– When we play poorly in defense and do not make the right decisions, we face problems, likein the first half today. We started the game too relaxed, apparently thinking that we would win easily. But it is impossible to achieve results in our sport without a fight. We were noticeably lose to the opponent in the rigidity. They went out for a walk, made wrong decisions in the offence. In the previous game versus Loko at the SuperCup, we conceded 70 points in 40 minutes, today we scored 57 only in the first half. I was ashamed in front of the fans and in front of myself for our game after the two quarters. In the offence, our main problem was the lack of patience. Sometimes we made rash decisions, as a result of which our defense suffered. But in the second half, we managed to change the situation and take a win.

Evgeniy Pashutin, Lokomotiv-Kuban Head Coach:
– We started well, moved the ball, played as a team both defensively and offensively. In the second half, we faced tough pressure from UNICS, we got lost in an individual game, lost our heads, began to preach run and gun basketball, missed a lot of open shots. Thus, they gave UNICS an opportunity to feel their game and allowed them to return in the third quarter, having lost the advantage. We have a young team, we have just come together and we must be able to act under physical pressure. To win, we should move the ball, play smart and team basketball. This is a good lesson for us.

What’s next
UNICS: home game versus Zielona-Gora on September 28.
Lokomotiv-Kuban: at home game against Tsmoki-Minsk on October 2. 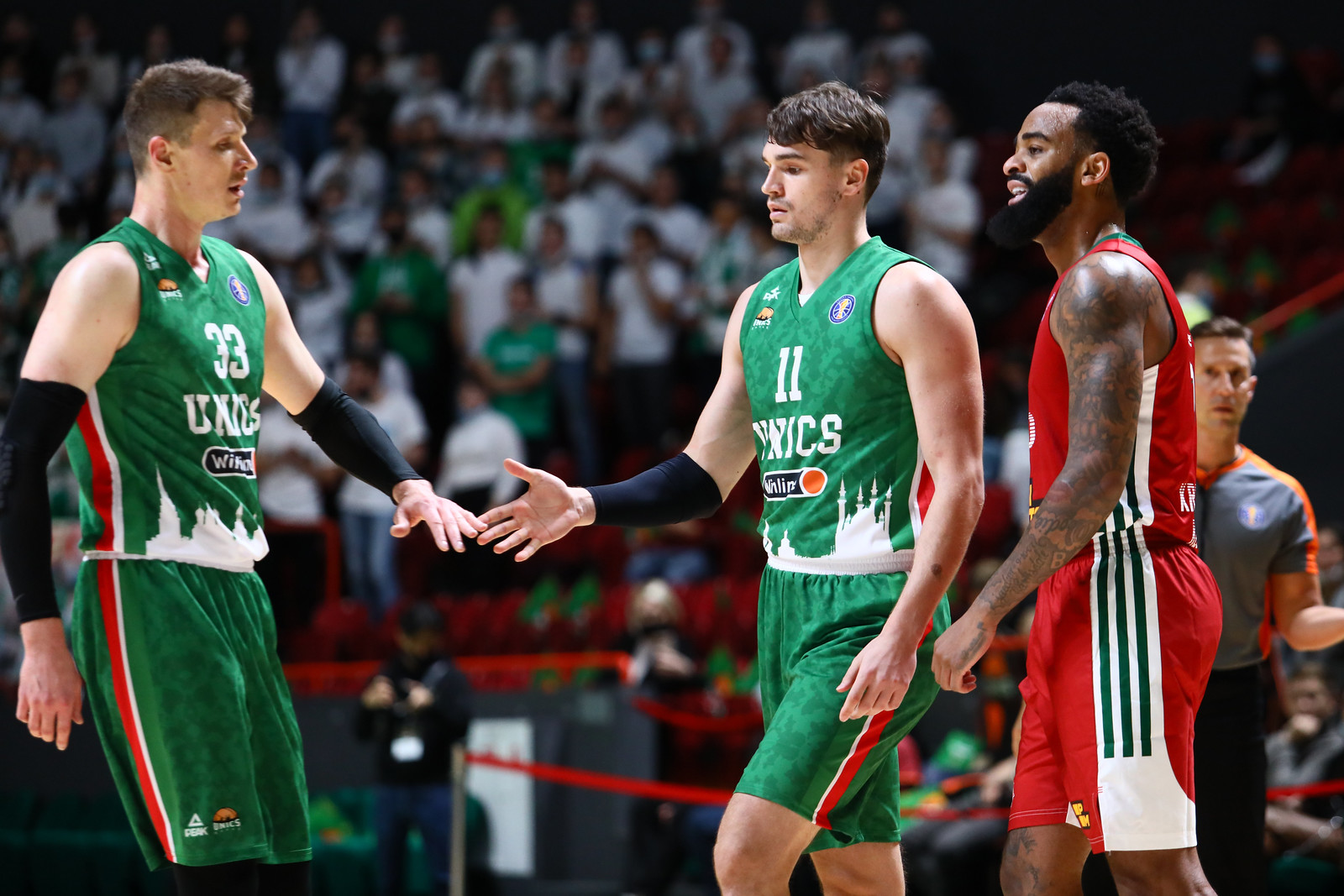