Story
Khimki (12-5) and CSKA (17-2) both have championship ambitions. Early on, the Army Men were in control on the road, taking 12-3 and 14-5 leads. Khimki’s offense was sluggish to start the game, but Petr Gubanov’s play down low helped the home team pull to within two, 14-12, at the end of the 1st quarter.

For much of the first half, neither team was able to hit a single 3-pointer. Effort and grit proved more effective than pretty offense in this game, though Sergio Rodriguez was able to knock down three triples late in the 2nd quarter to give his team a 31-28 edge at halftime.

The 3rd quarter belonged to Khimki. The Yellow and Blue hit four 3-pointers and stifled CSKA on defense, limiting the visitors to 10 points in the period (47-41). Kyle Hines and Will Clyburn, however, were able to bring Moscow back in the 4th quarter with the score tied 62-62 with a minute remaining. But neither team could hit a game-winner, forcing overtime.

CSKA answered with a pair of Joel Bolomboy free throws with 22 seconds on the clock, before being forced to foul. Charles Jenkins made only one attempt and the Red and Blue had 21 seconds to either tie or win the game.

Khimki exhibited outstanding defense for 20.5 seconds, but with only half a second remaining and Joel Bolomboy trapped on the baseline, Sergey Monia was whistled for a foul. The CSKA big man had the perfect chance to force double overtime, but his second free throw missed and Khimki escaped with the victory.

Stat
37 – number of points scored by Shved, who made his second appearance since returning from injury. 37 points is a new personal record for the Russian guard in the League, though he needed a League-record 31 field-goal attempts to get it.

Quotes
CSKA head coach Dimitris Itoudis: “I usually begin my press conference by congratulating the winning team. I will remain a gentleman and do that again. But if you watch objectively, you’ll see two different stories and can decide who was the main protagonist on the court today. We tried to play basketball.

We know that you need to emphasize offense and exciting play in basketball. Shved had a great game on offense; Rodriguez had a great game on offense. But you were at the game, you saw everything. If you are honest with yourselves, you saw what happened and understand everything. My players committed 20 turnovers, but half of them didn’t just happen; there was some other reason. I will remain a gentleman. But look at the final possessions. Simply watch this game objectively. One of my colleagues, who is no longer working as a head coach, would have said that today even the blind would have seen.”

Khimki head coach Rimas Kurtinaitis: “First of all, I want to enjoy this win because we have a busy schedule in the EuroLeague and the VTB League and we have to treat every game like a championship game. We had to play three straight games against the League’s three best teams–UNICS, Lokomotiv and CSKA-which in combination with the EuroLeague is difficult given the amount of travel. The biggest problem was that we lost two starters in the last game, Mickey and Crocker, so there were some concerns before the game. But often the fewer players you have, the more the team unites and plays better. Today we played very good defense. Holding CSKA to 72 points, even though they score 100 points in the EuroLeague, is not that easy. We had issues on offense because the rotation was short and we spent a lot of energy on defense. This win was no coincidence because outside of the first few minutes when we showed some nerves, we played well the entire game and controlled it, if not entirely. To be up most of the game and lose would have been unfortunate. The win was deserved.” 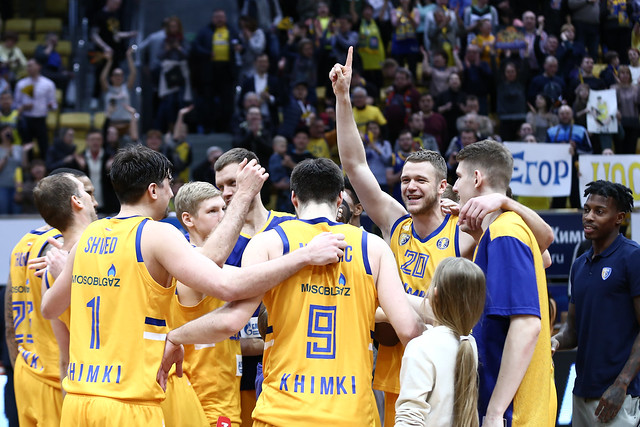