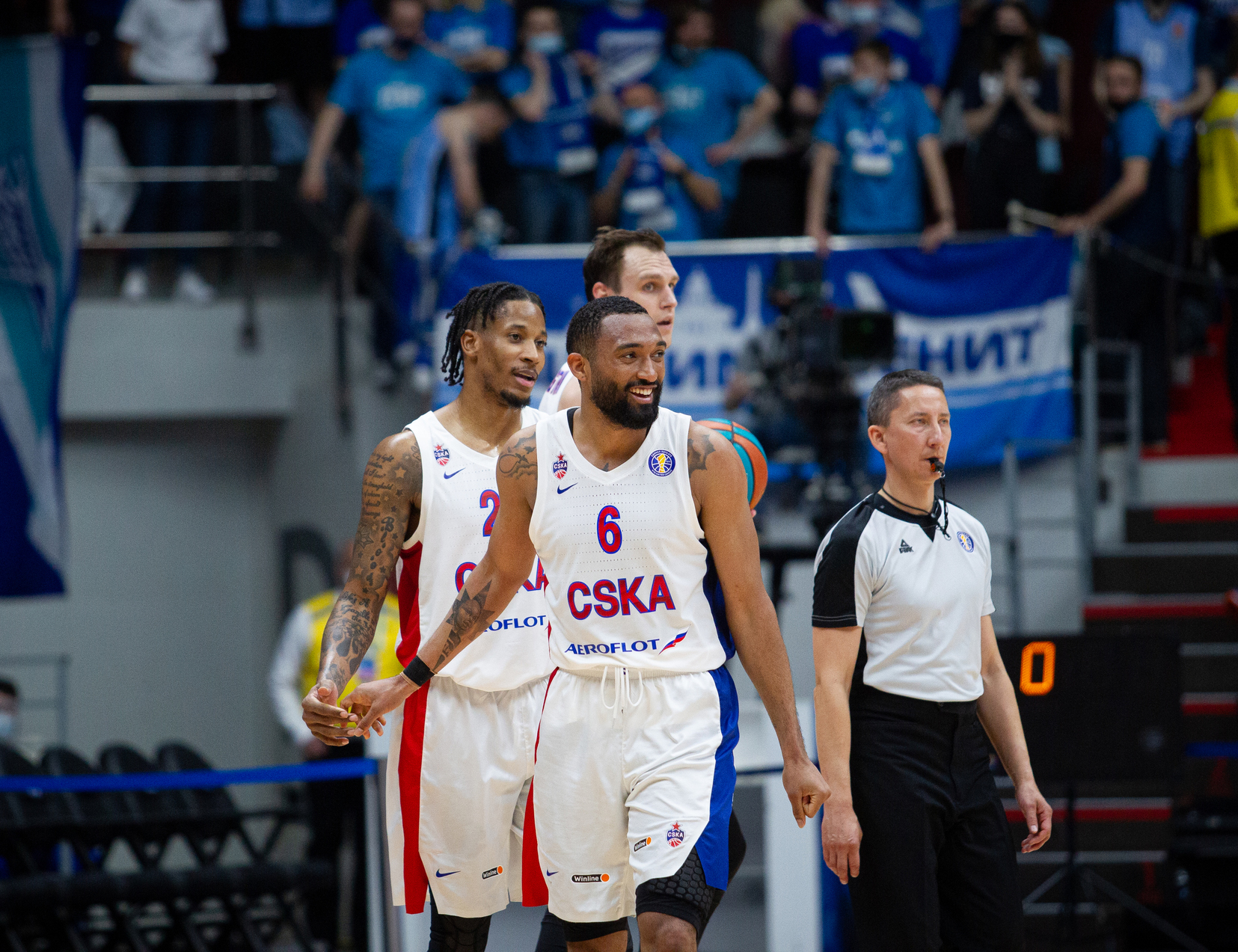 The main events of the semifinal series of the 2021 playoffs.

Zenit vs CSKA: Pangos and Baron’s performance, the best game of the season with two overtime periods and the Army team’s sniper record

CSKA was not a clear favorite for the semifinals: Zenit took home advantage, the schedule threatened to wear out the Army team, and in the VTB League season the Petersburg club defeated their opponent twice. On top of that, the Army team lost Iffe Lundberg just before the semifinals.

Shortly before the series began, CSKA management decided to extend the contract with Dimitris Itoudis – the Greek will continue to coach the team at least through the 2022/23 season.

And that decision had a positive effect on the whole team. In their first game in St. Petersburg, the Army team controlled the action, always several steps ahead of Zenit. Only in the fourth quarter did the Army team seize the momentum and get close to a 10-point lead, but Daniel Hackett and Will Clyburn found themselves on the board, scoring the key late in the game. Tornike Shengelia was CSKA’s top scorer with 17 points:

The second game in St. Petersburg followed a similar scenario: the Army team took a quick lead, looking to go to Moscow with 2 wins in 2 games. But Kevin Pangos and Billy Baron disagreed: A pair of guards brought Zenit back into the game and nearly gave the St. Petersburg team the win in regulation time. Tornike Shengelia stepped in and decided to play his best game in a CSKA jersey:

But it took two overtimes for Zenit to tie the game. Pangos and Baron played incredible basketball, scoring 35 points in the fourth quarter and two additional five-minute periods.

This game was indeed historic: For only the second time in all the United League playoffs, two overtime periods were played in one game.

The series moved to Moscow, where it ended with a win for CSKA. The teams played two very similar games: Zenit gradually gave the lead to the home team, which was very efficient on both sides of the court. On defense, CSKA separated Kevin Pangos from the rest of the team, and without their best offensive player, Zenit were not nearly as convincing.

On the other hand, the Army team was all right on offense. Dimitris Itoudis’ players stood out in particular on the perimeter, hitting more than half of their three-pointers in home games (23-of-44, 52%)! CSKA had two similar victories, except their leaders were different players.

Will Clyburn was the soloist in the third game of the semifinals: The American consistently scored from beyond the arc, without forgetting to take the free throw. In the end, Clyburn scored 24 points and was CSKA’s most efficient player:

In Game 4, Zenit handled Clyburn, limiting him to 13 points. But Petersburg couldn’t keep up with their other Army guard, Daniel Hackett. The Italian worked on defense as well, but he was the brightest on offense: 20 points, 7 assists, and 27 points for efficiency.

CSKA’s main weapon in the series was three-point shooting: the Army team shot 47.5% in the semifinals! With the win, the reigning league champion stepped up to the Finals and will play for the championship with UNICS Kazan.

Lokomotiv-Kuban vs UNICS: Injured MVP and a chance for the youngsters, overtime after a comeback, John Brown’s defense

Shortly before the playoffs, Loko guard Mantas Kalnietis was named MVP for the regular season. But the Lithuanian point guard did not help Kuban in the quarterfinals against Khimki, nor in the semifinals against UNICS, because of an ankle injury.

That wasn’t the end of the bad news for Loko fans: Nigel Williams-Goss, the team’s second point guard, missed the start of the series, recovering from an arm injury.

It was no surprise, then, that without their two best guards, Kuban lost their first game to UNICS by 19 points. Loko’s fourth-quarter comeback was more surprising: Krasnodar managed to come back with the support of the home crowd, and Reggie Lynch and Mindaugas Kuzminskas made it to overtime:

However, UNICS, which seemed to be celebrating early, pulled themselves together and opened the scoring in the semifinals. It’s worth noting the play of Jamar Smith, who better than the captain to carry his team in such a difficult situation. The guard scored 19 points, 9 of them in overtime:

Williams-Goss returned in the second game and Loko came back with a momentum that left UNICS trailing, 44-42, by halftime. The fans in Krasnodar’s Basket Hall helped their team as well:

But the third quarter was a disaster for Kuban, as UNICS played their trademark defense and surged to a 10-point lead. Loko didn’t give up and took it to a tight end, but once again stumbled on the Kazan defense:

Dimitrios Priftis’ UNICS is known for its defensive play, so it’s no surprise that their play under the basket helped them win game three and the semifinals as a whole.

After trailing Loko by 13 points at halftime, UNICS had already converted, scored a comeback in the third quarter and even took the lead, allowing Kuban, who had scored only 11 points in 10 minutes. At the beginning of the final quarter, Loko committed four turnovers (11 in the second half), giving up a chance to regain the lead.

Kuban had an opportunity to win and extend their winning streak, but their last-minute turnovers forced Loko to end the season in May. UNICS, having won the series on short notice, returned to the finals after five years and will fight CSKA for the gold.

In each of the three games Loko fought until the final seconds. Evgeny Pashutin wasn’t afraid to let younger players take over the court. For example, Grigory Motovilov was the best basketball player in the first half of Game 3:

And Sergey Dolinin with his dunk through three opponents moved up to third place in the top highlights of the semifinals:

Vladislav Emchenko played an average of 15 minutes and scored 5.5 points per game. Andrey Martyuk scored 2.7 points and grabbed 2.7 rebounds in about the same amount of time. 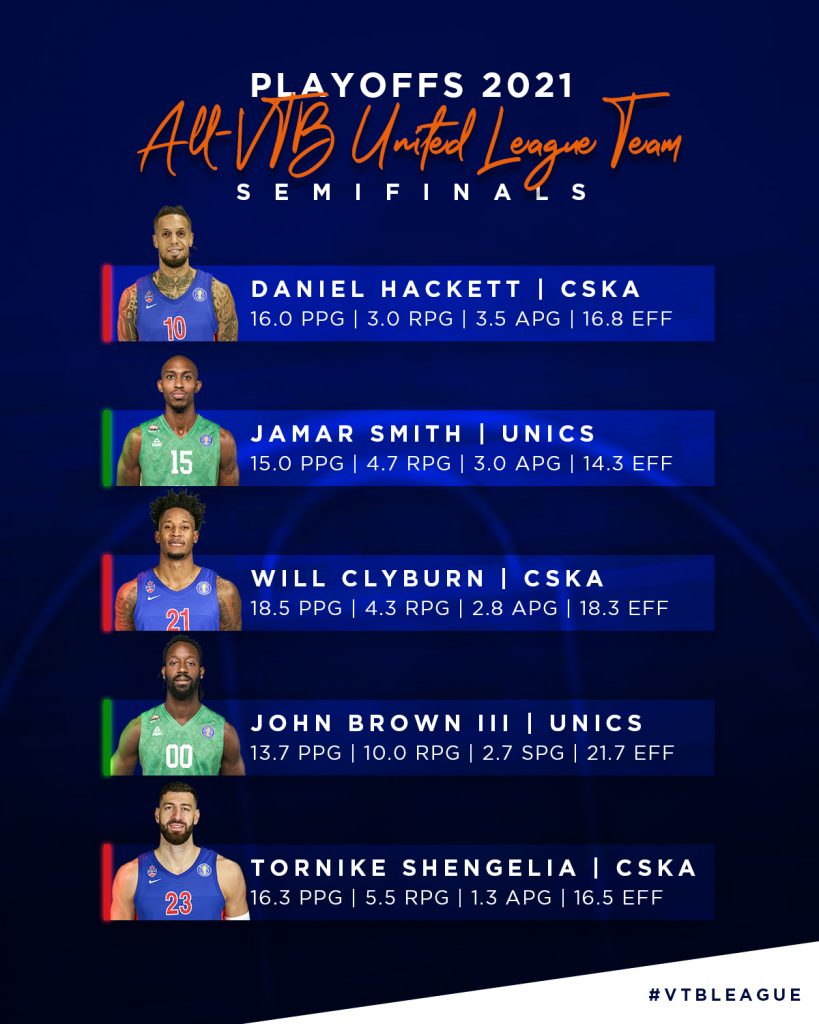