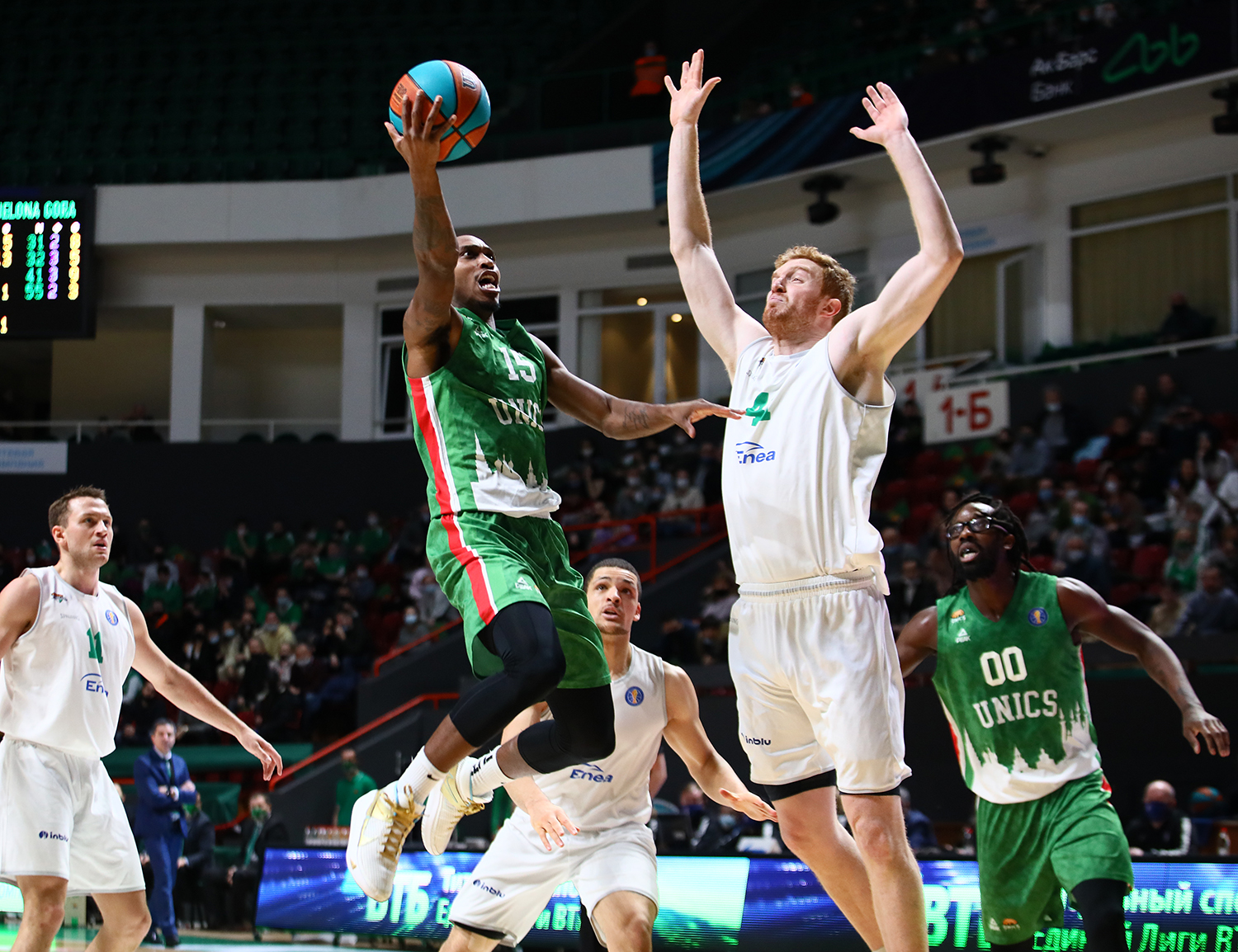 UNICS vs Zielona Gora rivalry has already been baptised as the Green Derby. This season, the fight for the title of the best ‘Green’ team is intense. Gora won at home in November (92:86) and were ready to perform in Kazan. Most likely, head coach Zan Tabak didn’t have to find the right words to motivate the team. The fans did his job literally by stopping the bus on its way to the airport:

It’s no surprise that the guests controlled the first half. Zielona Gora sank 6 three-pointers in the first half and were on their way to hit a hundred.

The hope of UNICS was in second chance points. Zielona Gora’s center Geoffrey Groselle got 2 fouls and Kazan took advantage of the paint with a half of their points in quarter scored of offensive rebounds.

UNICS adjusted defense in the second quarter and slowed the guests down. However, Dimitris Priftis’ side didn’t manage to make it even. Zielona Gora’s snipers were missing, but the drives compensated. Iffe Lundberg stepped up as an offensive weapon again:

After the break, UNICS still struggled. After 95 points against Avtodor on Sunday, the hosts were not as efficient. They managed to get only 46 points with 39% field goals in 30 minutes. Meanwhile, Zielona Gora showed better ball movement which helped to increase the lead – 55:46 before the final quarter.

At the same time, UNICS needed 2 minutes to almost erase the gap. Jamar Smith and Evgeny Kolesnikov made a 7-0 run and forced Tabak to call for time-out. This minute was not of much help to the Polish team. Kolesnikov again restored UNICS’ lead with a three-pointer.

Zielona Gora allowed 12 straight points in the early 4th quarter and struggled with a single basket for more than 5 minutes.

After the decay, the guests created a 9-0 run to build a 6-point lead. Jamar Smith came up with mid-range and a three-pointer. 64:64

Zielona Gora were maintaining the lead, but 7 seconds before the end Jamar Smith made another shot which happened to be a game winner. In the next possession, Iffe Lundberg couldn’t get the W for Zielona Gora.

Hero
Jamar Smith. UNICS captain made only 2 shots in the first 30 minutes. In the 4th quarter, however, he lead his team to a comeback: 13 points and 10 minutes and 22 points overall. Plus, he scored 3 rebounds, 1 assists and 19 efficiency points.

Stat
12 –point lead of ZIelona Gora in te course of the game.

Комментарии
UNICS head coach Dimitris Priftis:
“It was a very tough game for both sides, basically defensively. The score and number of turnovers is not by luck, it is a big games defense level. We must maintain this defensive effort, but we have to be able to execute and to play better offensively when the opponent show that tough defense. I’m satisfied with our defense, but I’m worried by the way we execute in the offnse. The last two possessions of the game were like a casino, it was totally stupid from both teams.”

Zielona Gora head coach Zan Tabak:
“It was a tough, physical game for the teams. Both teams made a lot of mistakes. In the end, I think we made a couple of offensive and defensive decisions that were not smart. Also, our players were tired in the end because we had a shorter roster.” 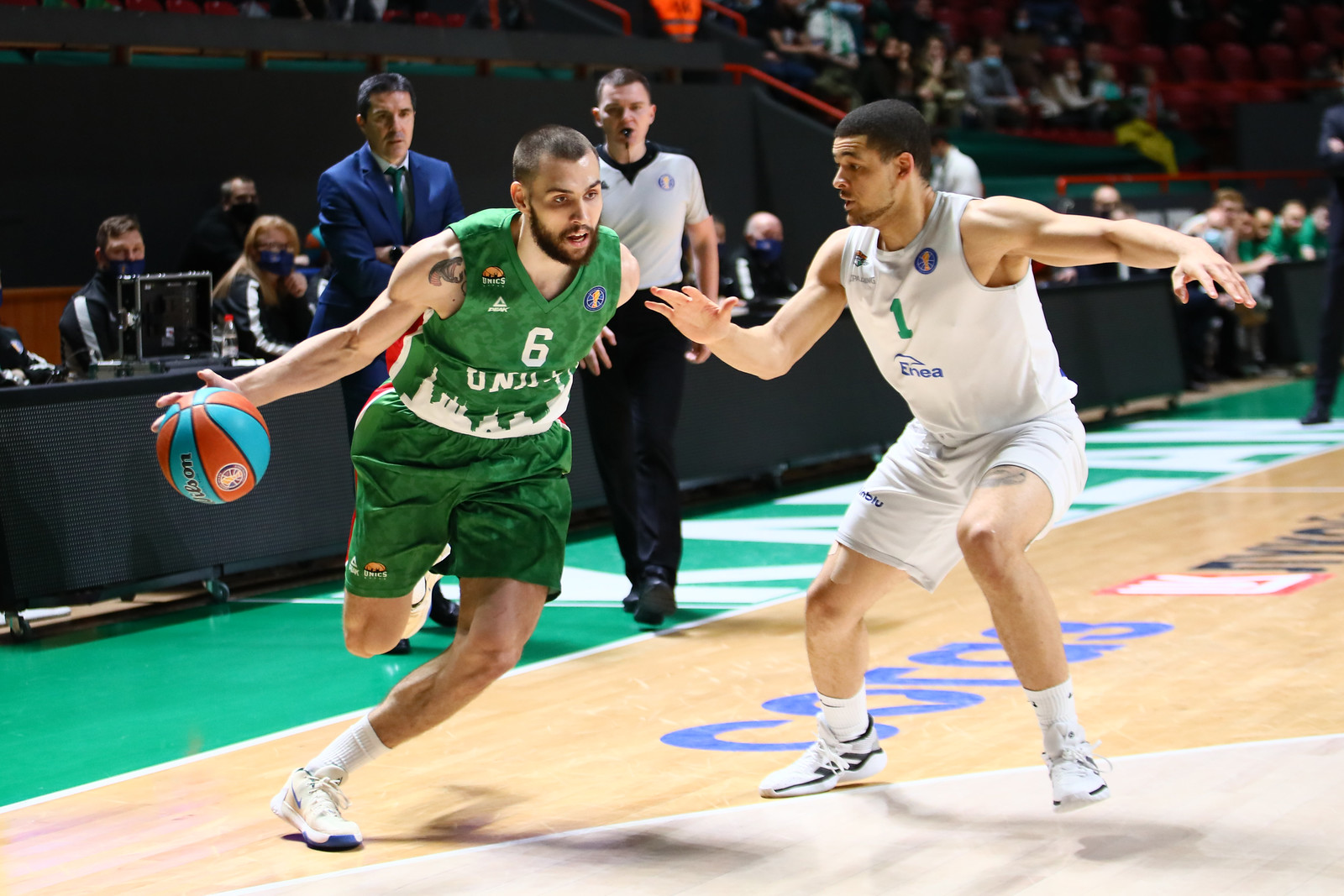