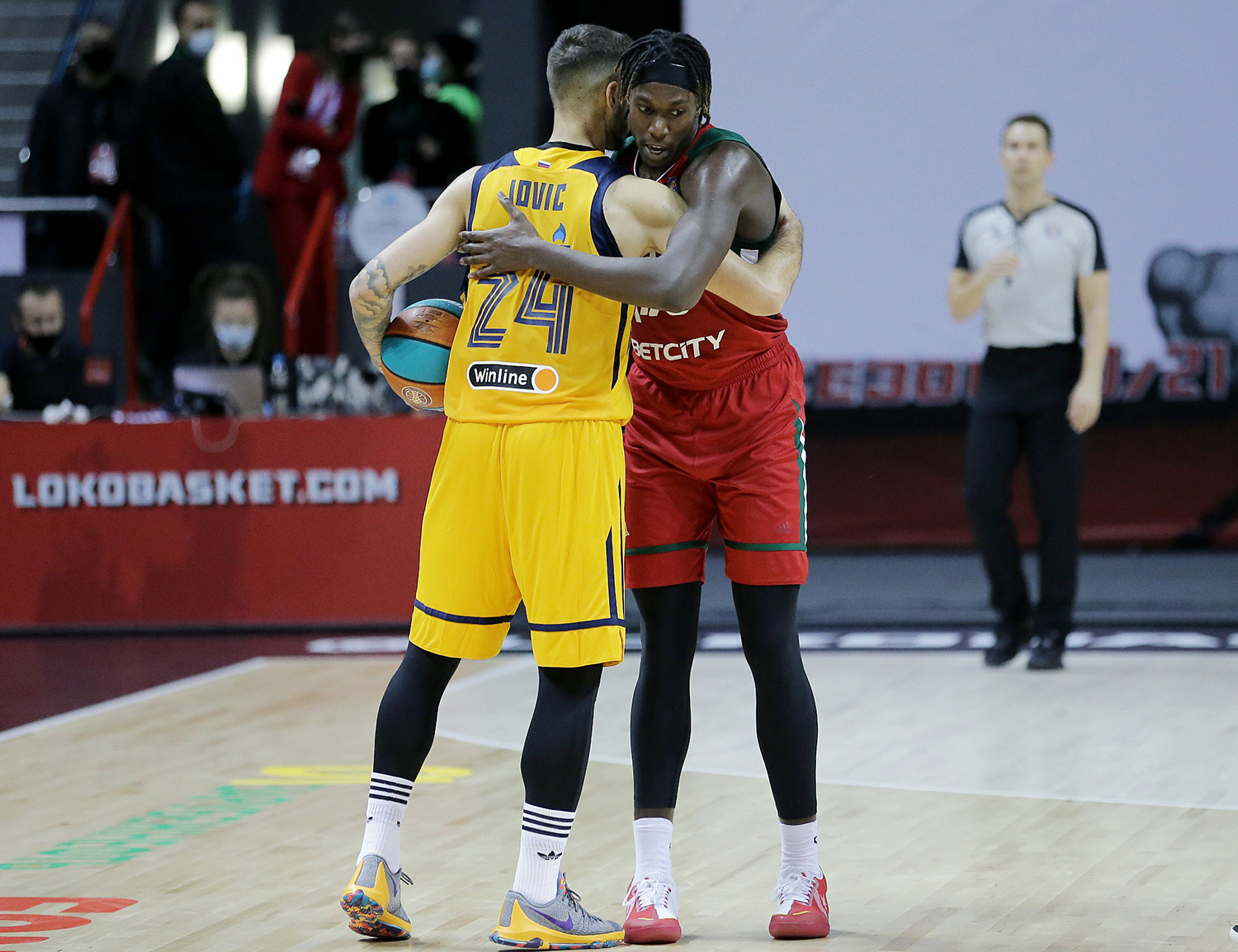 The game of the week was held in Krasnodar. Kuban haven’t lost at home this season, while Moscow Region had a positive end for 2020 beating PARMA (103:83).

Khimki have been successful last years in Krasnodar (4 wins in 5 games), however this time they lacked three forwards: Janis Timma, Jonas Jerebko and Sergey Monia. The coaching staff decided to field Egor Vialtsev. The guard who was a captain in that game exceeded the expectations: 4 three-pointers in a quarter, 16 points in the first half.

The second half was a duel of two top scorers. Jordan Crawford hit the mark of 30 points for the first time this season, and stopped one shot away from Isaiah Canaan’s season best of 36.

Jordan Crawford has played his best game in VTB League! The @lokobasket's guard against Khimki:

However, Crawfords efforts didn’t help much as Khimki had Alexey Shved who scored a double-double (30 points, 12 assists). His performance was crucial to Khimki’s win.

It was 19th career double-double for Shved. The guard took the second place in League’s history levelling ex-Tsmoki forward Ivan Marash. Frank Elegar’s 25 are one the first place.

Dunk of the week: Booker vs Kvitkovskih

The year has only started, but 2 players have already applied for dunk contest. Devin Booker caught Stefan Jovic’s assist:

Anton Kivtkovskih rushed into the paint with a strong intention to posterize:

However, Kvitkovskih’s dunk was probably the only good moment about Saratov’s trip to Kazan. UNICS showed almost perfect basketball and got the largest win of the season – “+29”.

According to both coaches, this battle was won in defense.

“Our defensive play was the key tonight,” said Dimitris Priftis.

“Their defense was outstanding tonight, they pressed us and forced many turnovers,” noted Gordie Herbert.

The quality of UNICS’ defense can be proven by stats: for the first time since October 10, Avtodor scored less than 70 points. At the same time, 65 points allowed is the second best this season for Kazan (64 allowed from Enisey).

UNICS even without Isaiah Canaan – who missed the game due to birth of his daughter – almosed reached 100 points. Jordan Theodore made a significant contribution: 28 points, 6 rebounds and 4 assists.

CSKA moves Nizhny down from second

By the end of 2020, Nizhny had been ranked 2nd, so CSKA’s visit was a fight of leaders.

The expectation totally lived up to by the first half. NN were resisting and even leading some times, Evgeny Baburin and Alexandre Gavrilovic amazed the fans in the early third quarter:

But generally, CSKA looked better even without Mike James and Will Clyburn. The Army club showed traditional intensity in defense…

… and finished up by 20 points. This was their 5th straight win. CSKA overpass NN in the table and now 1 Zenit’s loss is a price of CSKA’s leading position.

Nizhny showed their worst offense this season with 63 points only. It’s not hard to find a reason: team’s top scorer Anton Astapkovich missed the game due to injury. According to club’s press office, he won’t get back to court for at least 4 weeks.

The first game of 2021 was held in Krasnoyarsk where Zenit beat Enisey with confidence. Despite the 18-point gap, St. Petersburg coach Xavi Pascual gave credit to the opposing side, “This is a team with a great coach, they fight, and the ranking doesn’t reflect their real level.”

Zenit is the only team that stands undefeated by Enisey. Petersburg’s winning streak holds for 13 games. 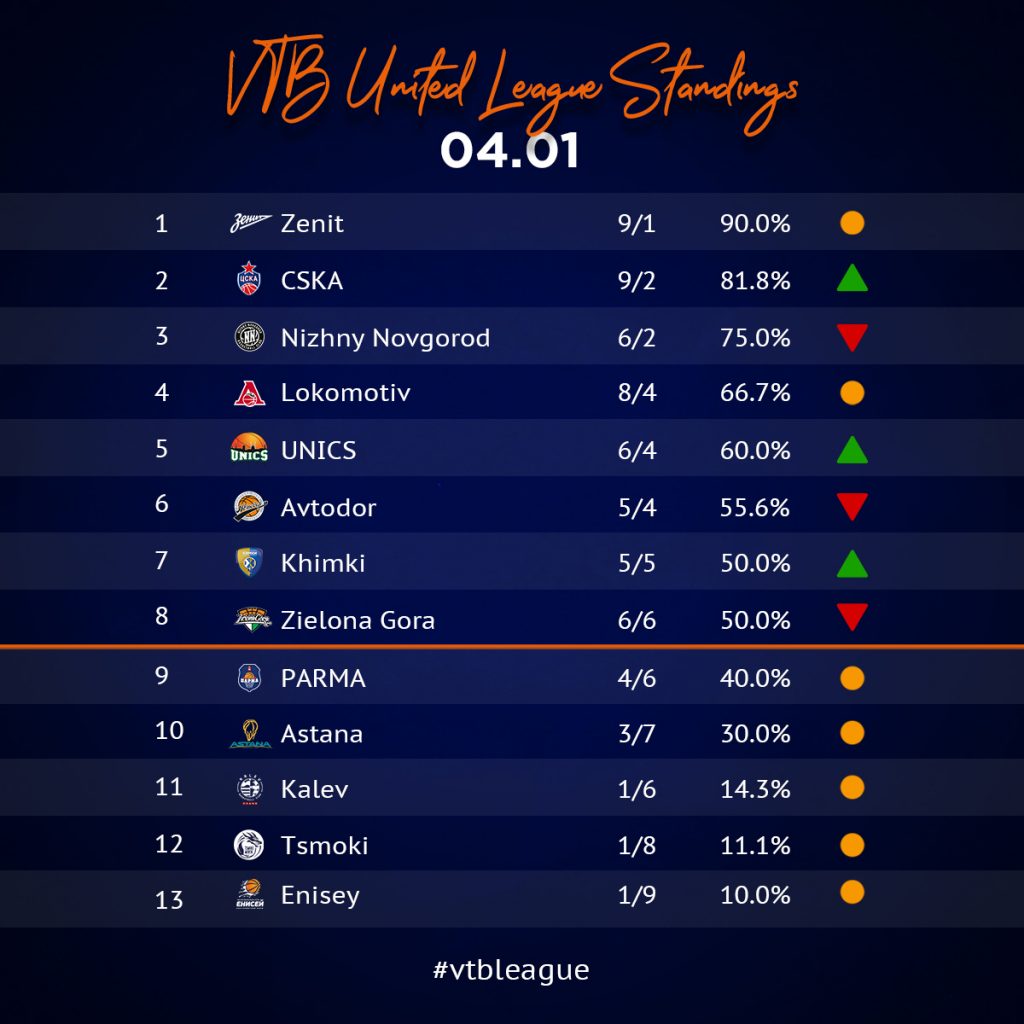