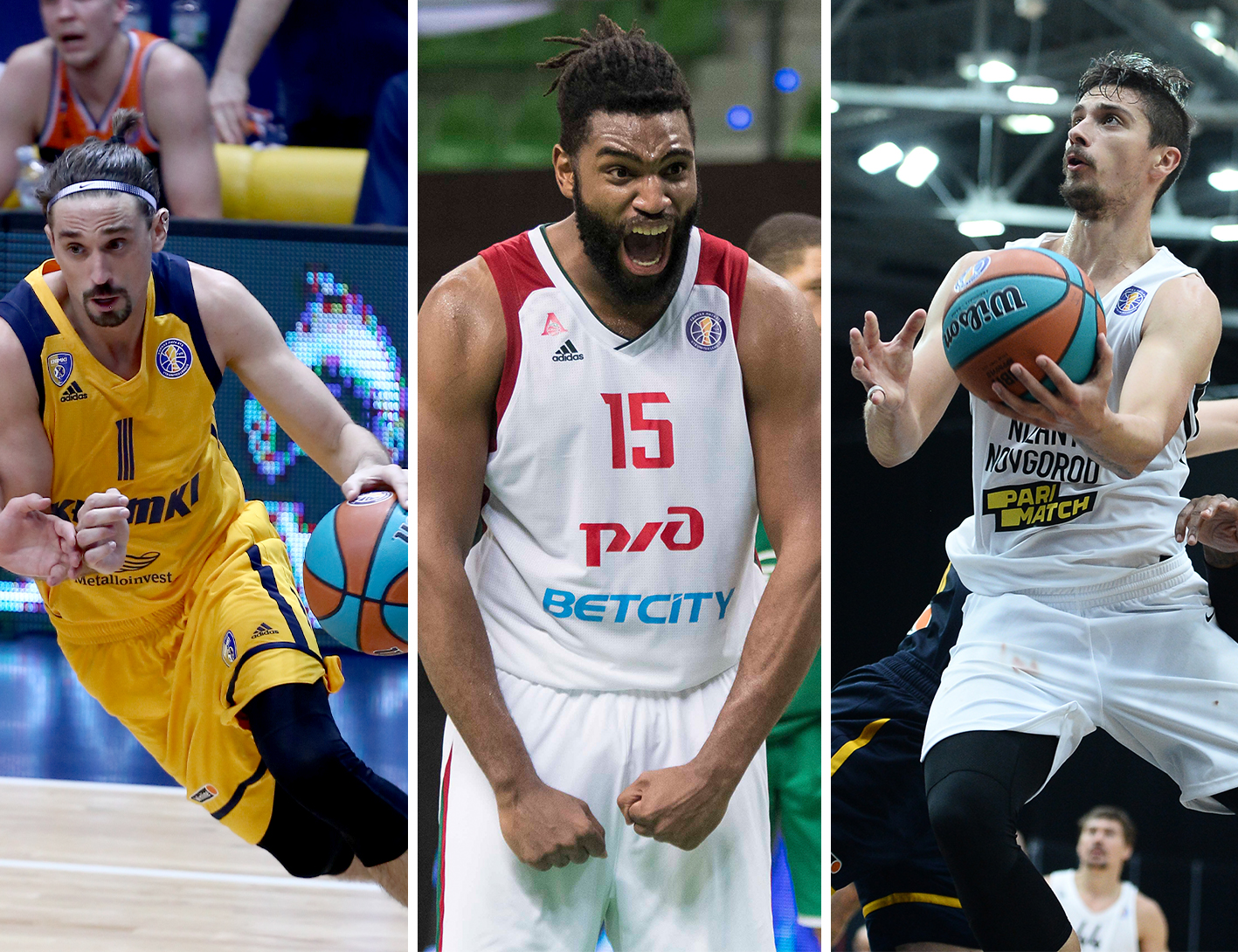 The 2020/21 regular season is drawing to a close with only a few games left on the calendar. The season turned out to be spectacular and interesting, and it’s time to remember the brightest moments of the championship.

In the summer, Nizhny Novgorod renewed their roster by inviting new foreigners, but at the same time retaining the backbone of Russian basketball players. Volga started the championship as the most Russian team – there were only three foreigners in the Nizhny Novgorod team, one of whom was injured in the preseason. Zoran Lukic’s bet on local basketball players was justified: in the first 7 games, Nizhny won 6 victories. Anton Astapkovich, as expected, became one of the leaders of the renewed roster. The forward proved himself as a base player last year, and also was selected to the 2020 All-Star Game.

In the game against Khimki, Astapkovich looked like the brightest player on the court from the first possession. The forward accelerated Nizhny Novgorod’s attacks, consistently gaining points from both the paint and the perimeter. The second quarter became a real finest hour for Anton. First, the Russian inspired “NN” to a 7-point run, and then completely forgot how to miss from the perimeter – 4 threes out of 4 for a quarter and 27 points scored in a half.

At the start of the third game segment, “Nizhny”, through Astapkovich’s efforts, increased the gap to “+13”, but in general, the forward’s activity after the break decreased markedly. This did not prevent Nizhny Novgorod from winning their first home victory over Khimki since November 2015.

In the offseason, Khimki were rightfully considered one of the League’s main contenders in the fight for the title. The Moscow club managed not only to retain almost all the leaders, but also to do an excellent job in the transfer market: Jordan Mickey returned from Real Madrid, experienced Greg Monroe and Errick McCollum came.

However, the Yellow-blues failed to realize the huge potential. Khimki had a very difficult season and risk ending the regular season on the 7th line.

The home game against PARMA was one of those in which Khimki looked like themselves from the 2019/20 season. Not even three minutes had passed, and the advantage of the Yellow-blues had already reached 12 points: two three-pointers by Shved and one each from Booker and Timma indicated the hosts’ serious intentions. Perm rushed in pursuit, but literally everything was falling for Khimki in the first half. And after a long break, Shved alone decided the outcome of the meeting. Alexey was in charge of the team’s game and if he didn’t score himself, then he handed out passes to his partners. The perfect game of Khimki’s leader helped the club not only to win, but also to repeat the season record in long-range shots – Khimki made 17 three-pointers.

Alan Williams was one of the main discoveries at the start of the championship. The athletic center fits perfectly into Loko’s pick-and-roll offensive system, becoming a full-fledged leader of the team. A distinctive feature of the American was stability: in six of the seven games played, he made a double-double, gaining an average of 22.1 points and 13.1 rebounds. Bigman’s incredible performance was well appreciated – Williams won the November MVP award.

Unfortunately, Mr. Double-Double’s extravaganza did not last long: at the end of November in Krasnoyarsk, the center tore knee ligament, which was why he was forced to miss the rest of the season.

Williams spent the first quarter of the fight against Zielona Gora in the shadow of his teammates, doing rough work on the boards. After taking a short break, Alan fully “turned on” in the second quarter. The players of the Polish team could not oppose anything to the powerful game of the American in the paint, allowing him to score 13 points and make 8 rebounds in a quarter. The next period of activity of Alan Williams fell on the first moments of the final quarter. In less than a minute, the center scored 5 points, which marked the beginning of the Kuban key run. Loko’s advantage reached comfortable +15, after which they had only to keep this reserve until the final buzzer.

Despite the progress compared to last season, Ivan Strebkov is neither the most high-scoring (10.4 points) nor the most efficient (11.7 points) player in Nizhny Novgorod’s roster. Strebkov’s main function is to lead the team’s game, with which he does an excellent job. The guard gives an average of 4.4 assists per game and it is the best result in this indicator among the Nizhny Novgorod team.

The unexpectedly high performance of the Russian from the first minutes was a surprise for Kalev: Ivan chalked up 10 of Nizhny’s 11 points in the opening of the meeting. The comrades actively supported the given rhythm, as a result of which, by the end of the first quarter, Nizhny Novgorod were leading “+10”. However, Marcus Keane decided to challenge the slightly cooled Strebkov. The guard had an excellent quarter, started the possessions of the Estonians, thanks to which Kalev went into the dressing room already in the leadership status – 45:44. But there weren’t enough guests for more. The Russian again led the team, taking part in almost every possession of Volga: the guard scored 8 points and 6 assists in the third. With another breakthrough at the beginning of the final quarter, Nizhny finally removed all questions about the winner.

Apart from Ivan Strebkov, Marcus Keene also scored 31 points in that game. The duel was the jewel of the game.

Drew Gordon started the season at Avtodor, but he clearly did not show his maximum in the Saratov team. Having moved to the team from “Zielona Gora” and the status of a potential leader, Gordon did not give Volga the necessary energy. In December-January, the Saratov club suffered 5 defeats in 6 games, and the center’s statistics during this period did not look very impressive: 5.8 points, 6.3 rebounds and 9.8 points for efficiency. But the game with Loko – Gordon’s future team – was definitely remembered in Saratov.

Gordon started this game without swinging: already in the middle of the starting quarter, the center had 7 points. After that, the American slowed down and the game was even. At the very beginning of the second half, Loko’s advantage began to grow, but the brilliant performance of Drew Gordon and Gian Clavell helped Avtodor close the gap to 3 points again. The teams spent the fourth quarter in a bitter struggle, and the ending of regulation turned out to be incredibly dramatic. Taking advantage of the loss of Zeljko Sakic, Will Cummings scored an easy three-pointer and brought the Kuban team forward a minute before the buzzer – 81:78. Drew Gordon volunteered to save Avtodor: the chaotic Volga’s possession in the last seconds ended with a crazy center three – 81:81.

The fate of overtime was also decided in the last seconds, and again Gordon did not stand aside. The American took the rebound on his backboard after a miss by Mindaugas Kuzminskas from the free throw line, and Gian Clavell, in a quick break, set the final score of the game.

While playing for Zielona Gora, Iffe Lundberg was one of the brightest players in the VTB League. The Dane was among the best in points scored (20.4), assists (5.4) and efficiency (20.2). From the very first games Iffe showed phenomenal basketball, but he reached the peak of his form by December: here and 32 points in the victorious game against UNICS, and 66 points in total for two games of the Danish National team, and Gora getting into the top five in the table, and, as a result, Lundberg’s recognition as MVP of the last month in 2020. The cherry on the cake of all this madness was just the game against Avtodor.

The Poles took the lead from the first minutes thanks to several makes from the paint, but they failed to increase the advantage – the Saratov team held out at the expense of three-pointers. In the second quarter, the emphasis in the Gora’s offense shifted to shots from the perimeter: Iffe Lundberg and Rolands Freimanis were marked by a series of long-range shots. Avtodor responded with a red-hot 10-minute performed by Mikhailovskii, Mason and Clavell. The equal game continued in the third. Lundberg remained the most prominent player in the game. The guard of the Polish team scored 9 points, but Zielona Gora still could not break away from the rival.

The game on a collision course pulled the teams into a clutch. A minute before the final siren, Drew Gordon scored a tough shot driving and put Avtodor ahead – 90:88. But defeat was not part of Iffe Lundberg’s plans. In the last seconds, the Dane put the hardest “three” through the hands of Zeljko Sakic and brought the victory to the Polish team – 91:90.

This season, for the first time in its history, PARMA reached the playoffs of the VTB United League, and in the first round Perm will have to play against Zenit. But the rival’s formidable name should not scare Kazys Maksvytis’ charges: less than a month after the victory of the Urals in the face-to-face confrontation with the newly-made winner of the regular season. And home victory over Zenit is not the only sensation performed by PARMA this season. It is worth remembering at least an away victory over CSKA or a home game with Lokomotiv-Kuban.

Stopping the starting onslaught of Loko, the Permians gave a 12:0 spurt. A strong period in the opening of the meeting was given by Adas Juskevicius, who scored two threes and one mid-range. Loko quickly regained the initiative and kept it up to the middle of the second 10-minute, until another three-pointer by Juskevicius provoked a new breakthrough from PARMA. The teammate was actively supported by Maxim Grigoryev and Lorenzo Williams, thanks to which the Urals team formed a comfortable start by the big break – 45:36.

In the third quarter, the Kuban players improved the offense and rushed to catch up with the opponent. A strong 10-minute was spent by Mindaugas Kuzminskas, who scored 17 points out of 26 team points. But the Ural Lithuanian responded to the overproductive quarter of the Krasnodar Lithuanian. Through the efforts of Adas Juskevicius, PARMA regained control over the game, and with the score 77:75, the guard took over the game, gaining all 7 points of his team in the end. Loko still had a chance to save, but Jordan Crawford and Kevin Hervey missed the most important three-pointers.