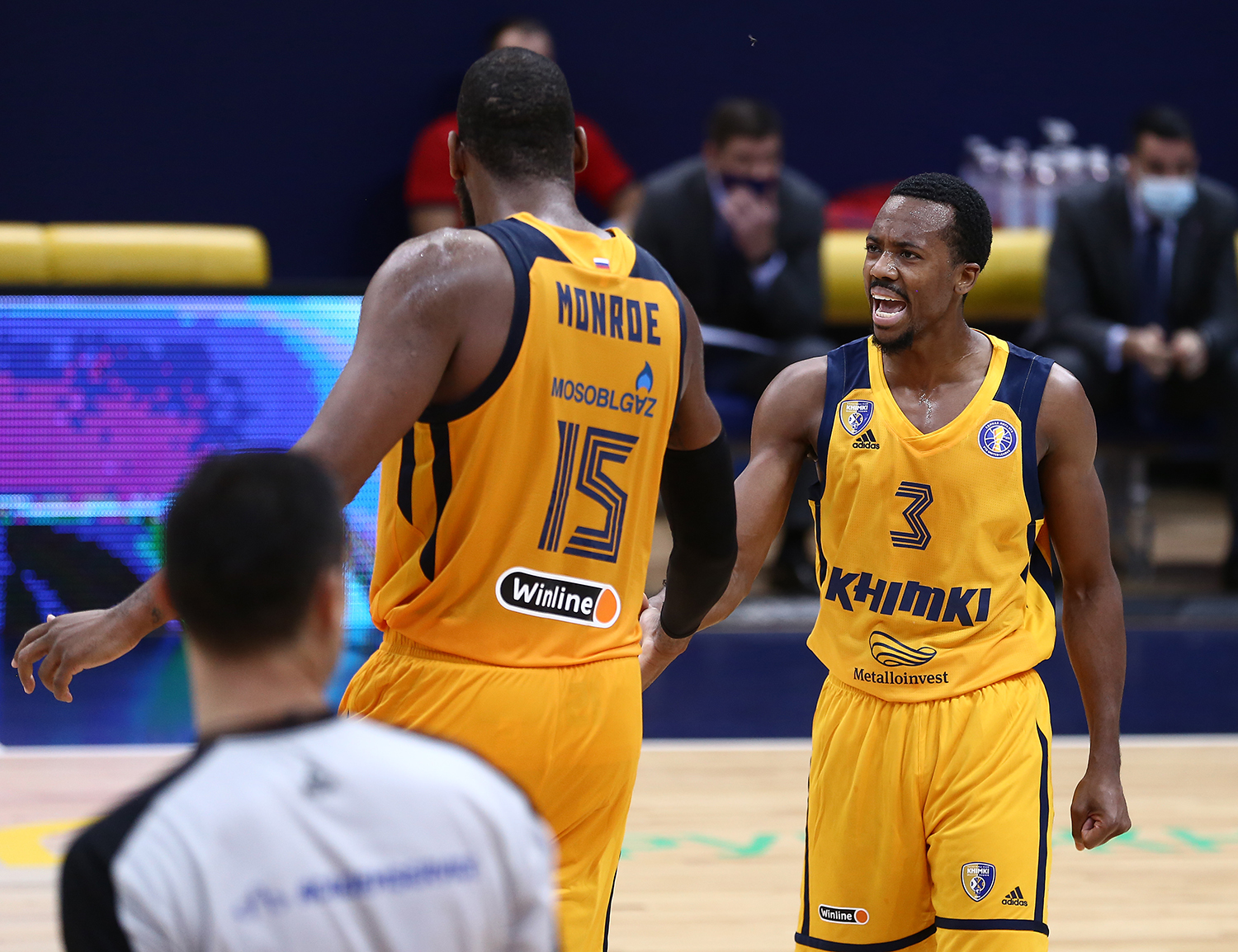 November started with a hot week.

Leningradka Derby was the main game of late 2020 as Khimki hosted CSKA. Due to pandemic restrictions, BCMO had no spectators.

And then, Mickey and Milutinov created another highlight: two blocks in 10 seconds:

The Game of the Week was a surprise itself. CSKA had comfortable lead in the first half, but didn’t manage to maintain it after the break.

Khimki’s offense did not rely on Alexey Shved, as Errick McCollum stepped up. His three-pointers created a lead for the hosts in the third quarter. As a result, brother of NBA’s CJ McCollum scored 16 points and 5 assists:

😱 @ErrickM3 McCollum, what a game tonight vs CSKA!

Khimki broke their 2-game losing streak and got back to top 8. However, the Yellow-blues’ record remains negative while CSKA are ranked 4th with 4-2.

PARMA was the latest League team to have a home game as Enisey arrived on Sunday. Local authorities allowed 20% of the capacity to visit game at Molot.

Even though Enisey are still recovering from coronavirus quarantine, they managed to ruin the feast. Krasnoyarsk came to Perm withouth head coach Drazen Anzulovic and guards Timofey Yakushin and Sergey Mitusov. However, the managed to control the game and neutralize PARMA’s offense.

Kazys Maksvytis’ side relied on long distance shots (number of three-pointer attempts exceeded two-pointer), but after a month without basketball, the snipers were cold (30% 3-pointers). Plus, the rebound was won by Enisey – 40:25. Krasnoyarsk even managed to win the opposing paint with 16 offensive rebounds (13 defensive for PARMA).

Enisey were increasing the distance, quarter by quarter. As a result, first win for Enisey and first loss for PARMA. Mikhail Kulagin led the guests’ offense with a career high of 26 points and 6 rebounds:

Zenit remain the only unbeaten team

After PARMA’s loss to Enisey, Zenit became the only undefeated team in 2020/21 season. Xavi Pascual’s side continued their winning run in Poland.

Throughout the entire game, Zenit were leading with double-digits even reaching 20 points. Zielona Gora’s attempts to come back failed time after time. As noted by Zan Tabak, “his side had too much respect for the opponent.” However, respect didn’t stop Marcel Ponitka and Geoffrey Groselle from creating one of the hottest highlights of the week:

Arturas Gudaitis demonstrated his best performance for Zenit as his actions helped the guests build the lead.

Avtodor unbeaten for a month

Avtodor went through another summer roster reshaping which included new head coach. The team started with two big losses and parted ways with Ben Emelogu, but that’s when the bad luck was over. Later on, Avtodor downed Astana and Khimki, and this Saturday got a tough win in Minsk.

Tsmoki were leading for 30 minutes even with 10-point margin by the halftime break. Rostislav Vergun’s side was hot on both sides of court and ready to break Avtodor’s winning streak.

But Minsk’s offense stopped in the final quarter: the Dragons couldn’t score in the clutch as Avtodor were stable. With a 15-0 run, Saratov got their 3rd straight win and reached a positive record in the table.

Avtodor’s Anton Kvitkovskikh was the star of the night. The 20-year-old forward hit a career high of 16 points and 4 of 5 three-pointers. These were the elemt that helped Avtodor survive in the first half.

Kalev survived the quarantine, but were not in full fitness to match Astana. That was their 4th game in 9 days as they’d played 3 matches in Latvian-Estonian league.

However, with limited roster and intense schedule, Kalev maanged to fight till the end. Chavaughn Lewis came back to help with 18 points, 5 assists and 2 steals.

🔥 Chavaughn Lewis is back to Kalev!

He debuted tonight in the League season in a game vs @PBCAstana with 18 points, 5 assists & 2 steals! pic.twitter.com/rMN1ZQCNlY

By the way, Tallinn is not the most welcoming city for Astana. They hadn’t won in Estonia capital since 2015/16 season.

Zielona Gora’s head coach Zan Tabak is a special guest. As a player, he won the NBA and silver medals of 1992 Olympic Games. After finishing his career, he decided to become a coach.

The Croatian compares NBA and Olympic medals and names the best player in European history in the interview to the League’s site:

Team of the week: