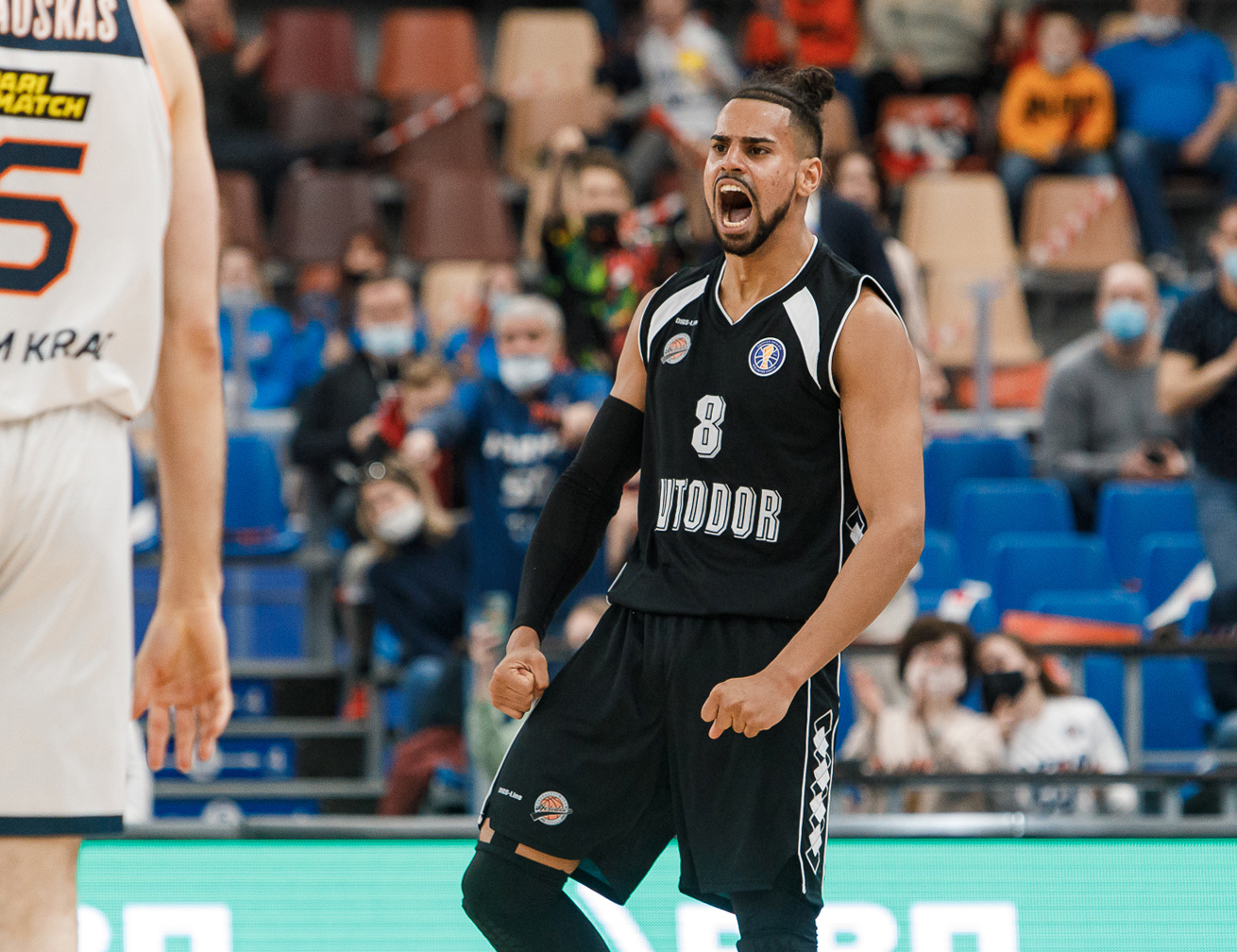 Regular season is over!

Lokomotiv-Kuban beat UNICS in the game for second place

In Kazan, UNICS and Lokomotiv-Kuban, neighbors in the standings, met in the battle for the second place in the table. For the teams, this was already the fifth meeting of the season, taking into account the Eurocup. And it so happened that we can see such a confrontation in the semifinals of the VTB United League: Loko confidently won a victory in the capital of Tatarstan and took second place in the regular season, UNICS – third.

Before the decisive Eurocup games, the hosts decided to give their leaders some rest. Of the foreign players, only John Holland spent 10 minutes on the court, the team’s captain Jamar Smith was in the application for the game, but he never made it to the court. On the other hand, VTB United League fans got the opportunity to meet young and talented players of Kazan. Three basketball players from UNICS-2 took part in the meeting against Loko (Kirill Anoshin, Ilya Karpenko and Sergey Drakovsky), two of them made their debuts for the main team (Karpenko and Drakovsky), one of them was a starter (Drakovsky).

UNICS started the game with a 5-0 run, but the 5-point advantage remained the maximum for the hosts in this meeting, despite the efforts of Pavel Sergeev and Georgy Zhbanov, who played the game with Loko without substitutions. Kazan won the first quarter (19:17), but by the big break the score was 37:46 in favor of Krasnodar.

Evgeny Pashutin made the most of the rotation in the game against his former team and also provided time for young players (Martyuk, Yemchenko, Dolinin, Kalinov and Sychkov spent 46 minutes in total), but the main characters were still foreign players: Nigel Williams-Goss finished the game with double-double (13 + 6 rebounds + 10 assists), Mindaugas Kuzminskas recorded 17 points, 7 rebounds and 5 assists, and Drew Gordon became the best in points and rebounds, finishing the game without a single miss.

Now, if the teams meet again in the playoff series, Lokomotiv-Kuban will have the advantage of the homecourt (in the EuroCup playoffs, UNICS had the homecourt advantage).

Most of all, the army fans in the game between CSKA and Nizhny Novgorod were happy about the return to Moscow of the ex-player of the “red-blue” Andrei Vorontsevich. Before the game, the 33-year-old forward of the Russian national team received a memorable gift from the president of CSKA, Andrei Vatutin. True, Vorontsevich did not appear on the floor that evening.

Despite Vorontsevich’s absence, Nizhny Novgorod fought on equal terms with CSKA, at the same time doing it at the expense of other ex-basketball players of the army club: Anton Astapkovich, Ivan Strebkov and Artem Komolov. By the big break, the guests even had a minimal advantage – 47:46.

CSKA seized the initiative after a long break – the threes of Ivan Ukhov and Daniil Kochergin allowed CSKA to break away from the opponent by 9 points. 21-year-old Kochergin, who played his sixth game of the season, in addition to long-range shots, distinguished himself with a spectacular slam in a fast break!

Nizhny Novgorod showed spirit and three minutes before the final buzzer approached the army team at a distance of one point, but could not regain the leadership and take away the victory from Moscow. The final difference was the same one point – 85:84.

Ahead of CSKA and Nizhny Novgorod are decisive games in Euroleague and the Champions League, and after that – another face-to-face meeting, in the quarterfinals of the VTB United League playoffs!

Khimki miss the opportunity to get higher in standings

Unlike CSKA, Khimki did not depend on the results of other games. Andrey Maltsev’s squad needed to beat Avtodor in order to take sixth place at the end of the regular season: the Moscow team would have bypassed the Polish Zielona Gora at the expense of personal meetings.

Avtodor, which had previously lost its chances of making the playoffs, happily accepted the hosts’ offer to play fast attacking basketball, producing one of the most high-scoring quarters of the season. Vladislav Konovalov’s team scored 28 points in the first 10 minutes and converted 5 three-pointers.

Avtodor’s offensive leader Gian Clavell already in the first half scored 16 points. By the end of the game, the Puerto Rican had 28 points.

The hosts were in the role of catch-up for most of the game, but in the final 10-minute they still managed to regain the lead, but not for long. Through the efforts of Clavell and Starks, the guests nevertheless brought the matter to victory. Thus, Avtodor beat Khimki for the second time this season, while the Moscow Region team remained in 7th place in the standings.

Khimki are now preparing for the quarterfinal series against Loko, and Avtodor marked the end of the season with a positive team photo from the BCMO locker room.

Tsmoki-Minsk take the biggest away victory in their history

It is symbolic that Tsmoki-Minsk began and ended this season in the easternmost cities on the VTB United League map. In the first game of the regular season, the Dragons beat local Enisey in Krasnoyarsk, and in the last game, Astana. At the same time, Nur-Sultan did it with a difference of 35 points – 109:74!

Kris Clyburn felt more comfortable in the capital of Kazakhstan. The American guard scored 33 points and 32 points for efficiency, making 6 three-pointers out of 7. Benjamin-Pavel Dodoo showed no less outstanding result – 20 points, 5/6 from beyond the arc.

Kris Clyburn, what a preformance against Astana!

Thanks to the efforts of Clyburn and Dodoo, the Belarusians managed to break several records at once:

As a result, Tsmoki-Minsk finished the season in last place in the table with a score of 3-21, but gave its fans the most positive emotions.

Kalev took revenge on Enisey, and Keene proved himself as season best scorer

Kalev guard Marcus Keene secured the title of the most high-scoring player of the season even before the final game of the season, but the leader of the Estonian team decided to confirm the status of the top scorer in Krasnoyarsk. An additional motivation for Keene was the opportunity to take revenge from Enisey for the defeat in Estonia.

True, in the first quarter everything did not go according to the guests’ plan: 9 minutes after the tip-off Enisey had an advantage of +19, and Keene himself did not score a single point by the end of the starting segment. The hosts’ advantage remained double-digit until the big break, to which the teams went with the score 49:37.

Marcus Keane started the second half with a series of accurate shots, after one of his long-range shots in the middle of the third quarter, Kalev regained the lead. However, players of Enisey successfully demonstrated their sharpshooting abilities, Viktorov, Komissarov and Kulagin distinguished themselves. Thanks to this trio, the hosts reached the final quarter with “+7”.

Another break between the quarters helped Kalev to reboot for the second time in this game – the Estonians made a breakthrough 17:3 in 5 minutes, after which they successfully brought the matter to victory. And the leader of the guests, Marcus Keene, scored 28 points by the final buzzer, which allowed him to stay at the beautiful mark of 20 points scored on average per game in the 2020/21 season.

Marcus Keene proved himself as season’s top-scorer, scoring 28 points in Krasnoyarsk.
Gian Clavell got into team of the week for the second straight time, this time the Puerto Rican guard helped Avtodor win in Khimki, he scored 28 points.
Iffe Lundberg scored 20+ points for the first time for CSKA, it happened in the victorious game against Nizhny Novgorod.
Kris Clyburn had the performance of the week with 33 points and 32 efficiency points in the winning game against Astana.
Drew Gordon didn’t miss in Kazan, Loko’s center scored 19 points and 8 rebounds on 9/9 shooting, Krasnodar got the second place by the end of the season.

Highlights of the week

📊 Regular season is over! pic.twitter.com/Clxzyso0BG