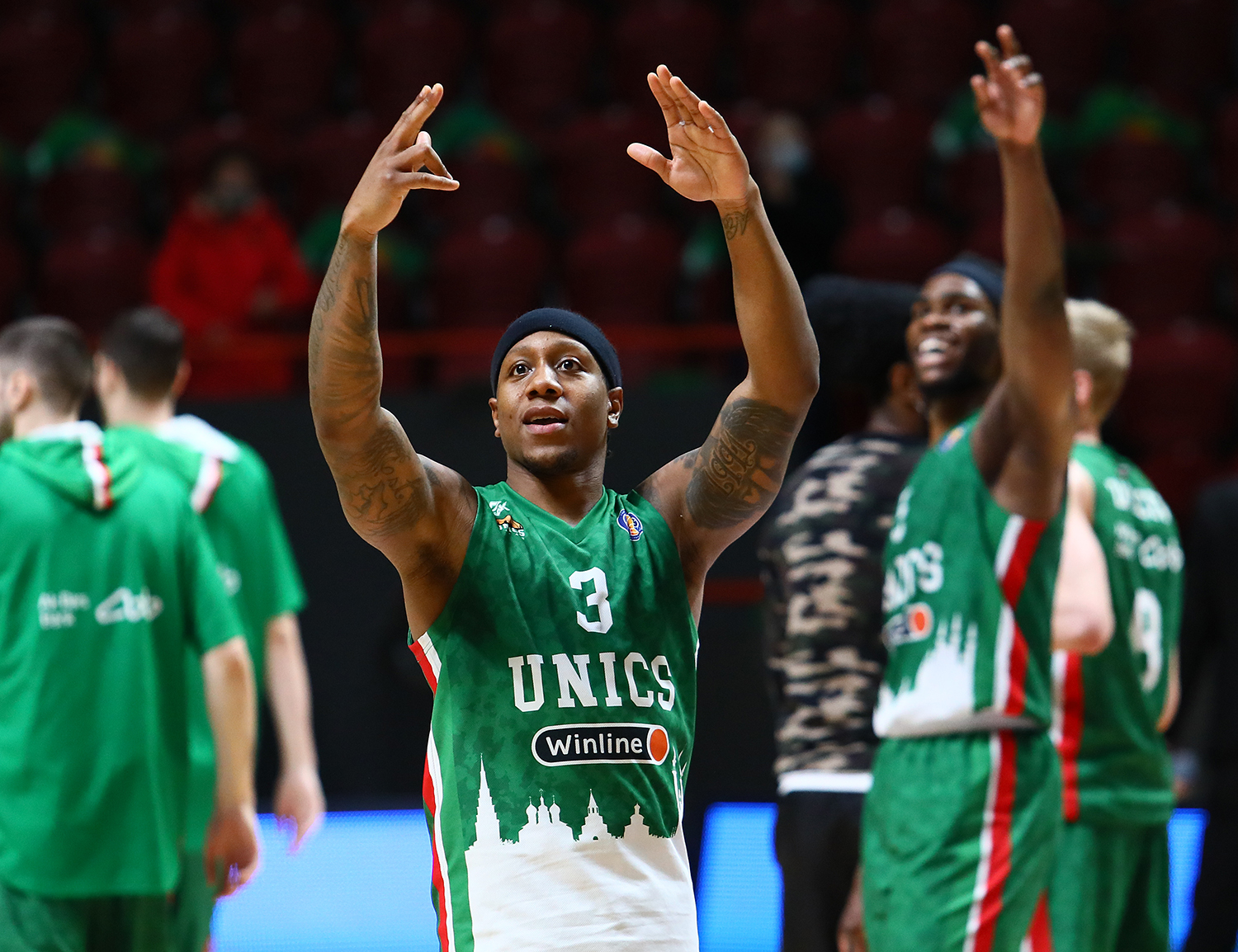 The key information about the gaming week in the United League.

Astapkovich plays the best game of the season, Nizhny Novgorod wins again in a defensive style

Tsmoki came to visit Nizhny. The Minsk team won their first game last week, beating Kalev at home and wanting to build on their success. And in the first 30 minutes of the game it worked out: the Belarusian team acted from a position of strength and constantly led the score.

At the halftime, Tsmoki left with the 5 points lead – Stefan Jankovic shot 3-pointer just at the buzzer:

Nizhny scored only 36 points in the 1st half. NN had problems in the offencive end, and in this it is worth paying tribute to the Minsk players – they defended effectively, and sometimes even spectacular:

During the 3rd quarter, Tsmoki led by 8 points, but Nizhny found a way to fix the situation. The comeback was initiated by Anton Astapkovich: the forward played hig best game of the season, scored an impressive double-double of 20 points and 13 rebounds and became the most effective player on the court.

Nizhny Novgorod won this game in the same style as a week ago against PARMA. Zoran Lukic’s team also lost during the game, scored few points, but improved in the 4th quarter. Even the results of these games are similar: both PARMA and Tsmoki were able to score only 65 points in Nizhny Novgorod.

Astana brought to Kazan Jaylen Barford – the guard with 26.0 points per game was the best scorer of the League. But UNICS easily coped with Barford in particular and with the offence of the guests in general: during the opening quarter, Astana scored only 16 points, and the Kazan team already created a double-digit lead:

By the halftime, Astana managed to reduce the gap, but the second half put everything in its place: UNICS led by 20 points thanks to Hezonja – Brantley duo and extended the winning streak to 3 games in a row.

The Kazan team Head Coach Velimir Perasovic also spoke about the value of the win over Astana: “It was an extremely important game for us, because a home defeat against Astana would completely neutralize the win over CSKA.” Following the results of the autumn part of the season, UNICS won 6 out of 7 gamess and firmly settled on the 1st place of the standings.

There is a small adjust for Astana fans: although Jaylen Barford scored only 16 points in Kazan, he retained his leadership in the list of the best scorers of the League with 24.4 points on average per game.

By its 4th season in the League, Zielona Gora managed to beat almost all its rivals. The exceptions are only 2 teams – Loko and Zenit.

Gura failed to get the W over Loko this week. From the very first quarter, Loko took the lead with the extremely high performance. After the 1st quarter, they scored 28 points…

… and by the halftime, reached the 57 points, led by 15 points. During the game, Lokomotiv Kuban had a 20-point lead, but at the same time Zielona Gora managed to revive the intrigue in the end. In the last minutes, the difference from 20 points was reduced to only 8, and ZG players, perhaps, simply did not have enough time for a full-fledged comeback.

Having played the ending on experience and not letting the opponent go ahead, Loko took away from Poland the 4th win of the season and the 7th in the rivalry history with Zielona Gora.

PARMA shocks Tallinn and rises to the playoff zone

Admittedly, the start of the season was not very successful for PARMA: after the win over Tsmoki, there were 3 consecutive losses. The Perm Krai team dropped to 10th place and in case of loosing in Tallinn risked falling behind competitors in the race for the playoffs.

But already at the end of the first half it became clear that PARMA were aiming to break the losses streak: they scored 6 three-pointers and by the halftime broke away to 21 points! Kalev, who started the game pretty well, the second quarter turned into a fail in offence – they scored only 2 points in 9 minutes, and only 2 consecutive three-pointers by Marcis Vitols saved the situation a little.

After the halftime, Kalev increased its effectiveness, but at the same time trailed even more – during the 3rd quarter, the difference in the score reached 30 points!

As a result, PARMA almost got the biggest away win in its history (+34 away against Enisey last season), leading by 33 points in the 4th quarter. But the final +27 should fully satisfy the Perm team fans. PARMA return from Tallinn with their first W in November and go on the break in the playoff zone.

Record of the week

Anton Astapkovich made 13 rebounds in one game – this was the personal best this season among all players. However, two days later the same record was updated by Artsiyom Parakhouski, who got 15 rebounds against Kalev.

Comeback of the Week

Almost simultaneously with the end of the game in Tallinn, UNICS announced Janis Timma as their new player. The agreement with the 29-year-old forward is signed for 1 month with the possibility of extension until the end of the season.

Interview of the Week

UNICS forward Mario Hezonja gave an interview to the “Above the Rim”, where he talked about his plans after his retirement, tried to choose the best between Kobe Bryant and Drazen Petrovic and explained why he does not like social media.

Mario Hezonja: «What will I do after my retirement? I’m going to live in the forest with my dogs»

Team of the Week

Anton Astapkovich scored his first double-double of the season and led Nizhny Novgorod to win over Tsmoki.
Mario Hezonja stopped a step away from a double-double – 18 points and 9 rebounds in the game with Astana.
Darius Thompson became the most effective player of the week and at the same time the key Loko player in the game against Zielona Gora.
Artsiyom Parakhouski and Adas Juskevicius helped PARMA win the first game in a month and return to the playoff zone.

Top-5 Plays of the Week

Loko and Nizhny are catching up CSKA, UNICS is still the leader of the season, PARMA is pushing Kalev out of the playoff zone. 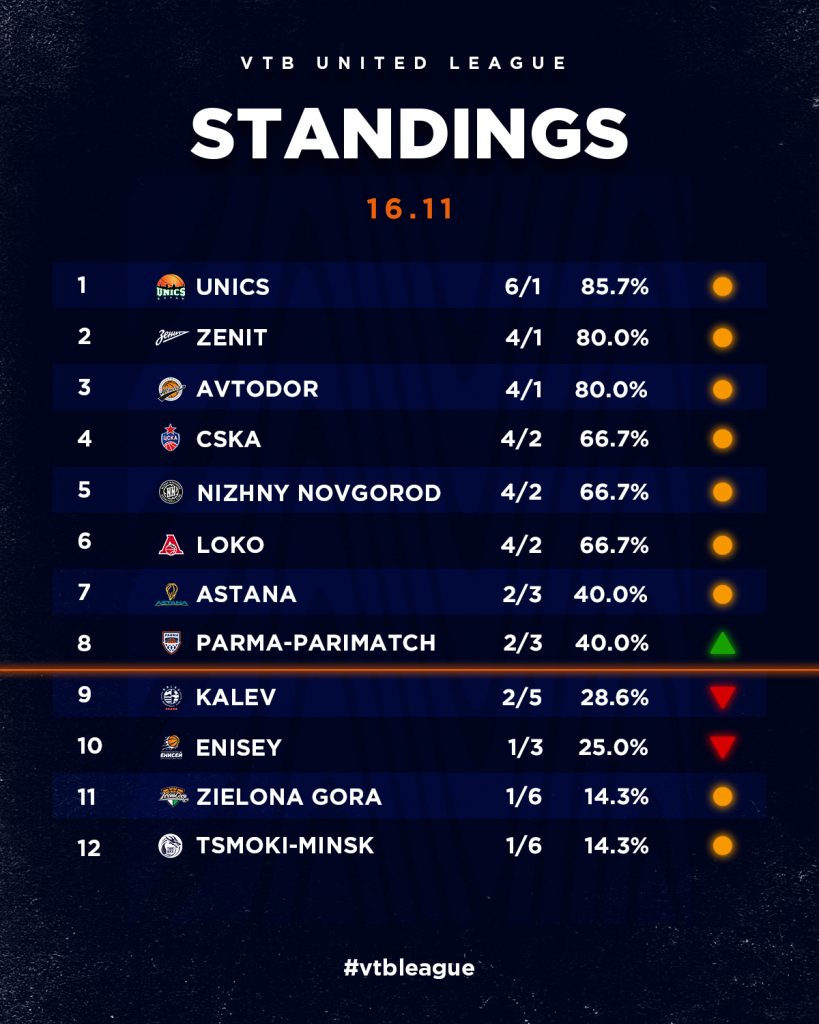