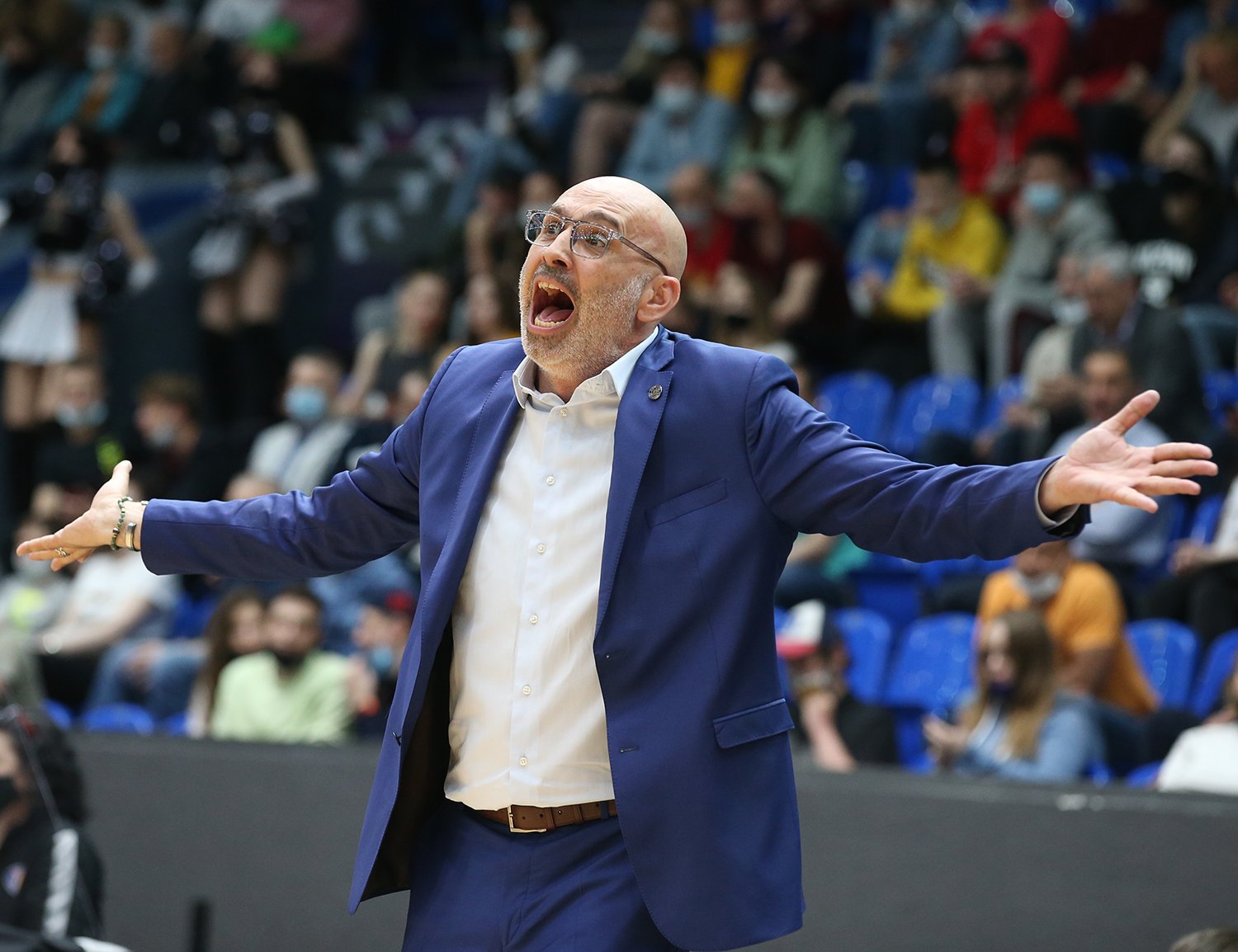 If a player does not guard, he will not play with me. In the game, the main thing for me is defence. We try to play fast, aggressive basketball, but with strict defense. It doesn’t matter how many points player scores – he must guard opponents.

Instead of basketball, we watched ballet today. But you should go to the Bolshoi Theater for ballet, not to the basketball court. There was no team basketball in the game. We didn’t win the game, our opponents just lost it.

Buying a player by offering him a lot of money is not a great philosophy. But it is not easy to prepare a player and give him a chance to grow together with this team, and not every coach and not every athlete can achieve a result.

In a professional club, no one is going to run after a player with a stick. We are trying in every possible way to make a talented basketball player grow into a great master, but the player himself must understand that with incorrect behavior, not only his career is in question, but also most importantly his health.

I was ready to kill a couple of people in at least some episodes, and I would certainly have been acquitted. Because it is impossible to lose such an advantage and allow the opponent to score freely in a possesion offence. I don’t have the words.

I’m to blame – so write it down! Today Samoylenko hit three-pointers – I told them to guard him.

Each of you can become a winner or a vice-champion of a tournament or the Olympics. But when these tournaments end, you need to re-confirm your success with training and beautiful games.

There are several passenger players in the team who don’t care, and I’m sorry about that. The goal for the game against CSKA was to play relaxed and enjoy playing basketball. Most of the team tried, but there were players who behaved like in a theater. This is not normal.

In the last quarter, I wanted to pick up a machine gun. For the first 27 minutes I was ready to take off my hat to the basketball players, but then the team fell asleep, and I had to wakethem up somehow.

When I arrived in Nizhny Novgorod, we agreed that Russian players would get playing time and develop. I won’t hide it, it is difficult. However, we have reached such a level of relationship that we completely trust each other. Each player understands his role in the team and knows in which elements of the game he should add. Now we are no longer afraid to bet on local players.

I want to see desire in my players’ eyes. No rival can take away our desire and energy from us! Tomorrow there will be two bald Serbian heads on the court (the head coach of Loko at that time was Sasha Obradovich-ed.), so the court in Krasnodar will shine. We will see which of them will win!

Foreigners do not play a key role in Nizhny Novgorod. Yes, they help, but they don’t play the main role. The Russian players are also the team leaders.

We are like a submarine-we are all going to the bottom together. The front line coped with bigmem from PARMA, but guards staged a disaster. A shameful game for us.

We got a well-deserved slap in the face today. My players have to look at themselves and think about how they played today. We started the game very softly, but who are we to defend like this against Kazan? We didn’t show our character today.

I had a pleasant problem-to choose 12 players for a game out of 14. Previously, we did not always have enough people even for training, but now we have 14 basketball players and the opportunity to vary the roster.

Am I happy with today’s game? I am always dissatisfied! In the first half, we missed 5-6 easy shots, and it can’t even be attributed to excitement. What kind of excitement? We play at home in front of our fans, so such mistakes are unacceptable.

Nizhny Novgorod was a group of citizens in the game against UNICS. My team was deliberately a group of citizens. And it’s not about basketball, the reason was only in the attitude. I hope that the lesson in Kazan will be enough for us and we have a conscience.

We have to show that we are real men, and not… We have internal problems. Tomorrow, 10 fighters will come to the site, who should be as motivated as possible, act with energy and play not even 100, but 150% of their capabilities.

Small details lead to defeat. Especially when you play with CSKA.

How to develop young people if you don’t give them playing time? Young people should also feel responsible for the result.

American basketball is a circus. I don’t like their system and style of play. It’s not even showtime anymore. If I wanted to see the circus, I would go to the Zapashny brothers’ circus.

If there is such an opportunity, I will be happy to stay in Nizhny Novgorod until retirement. This is my city and my team. Here I have a unique opportunity to combine the struggle for high results and creativity at the same time.

It’s good that once they came up with the idea to limit the time for an offencive posession. My philosophy is to play as fast and disciplined as possible both in defense and in offence.

I’m not ashamed to be wrong. We all learn from mistakes.

The limit has both pros and cons. Our team has a goal or even a philosophy — young Russian players development. Therefore, we do not depend on the limit. Russians are in the leading positions in the NN. I am proud of this fact.

I do not know how the brain of each of our players works. Therefore, both positive and negative mistakes happen. But mistakes are a part of our life.

I will stop studying when I retire. Stagnation is a path to self-destruction. It is my duty as a specialist who wants to achieve success to leaf through my notes, study new trends, and follow other mentors.

Not everyone who understands basketball can become a coach. The task of the coach is to build a team so that not only the players interact productively with each other, but also the whole club. The coach should be a psychologist. It is necessary to be able to find an individual approach to the player. And you need to learn this.