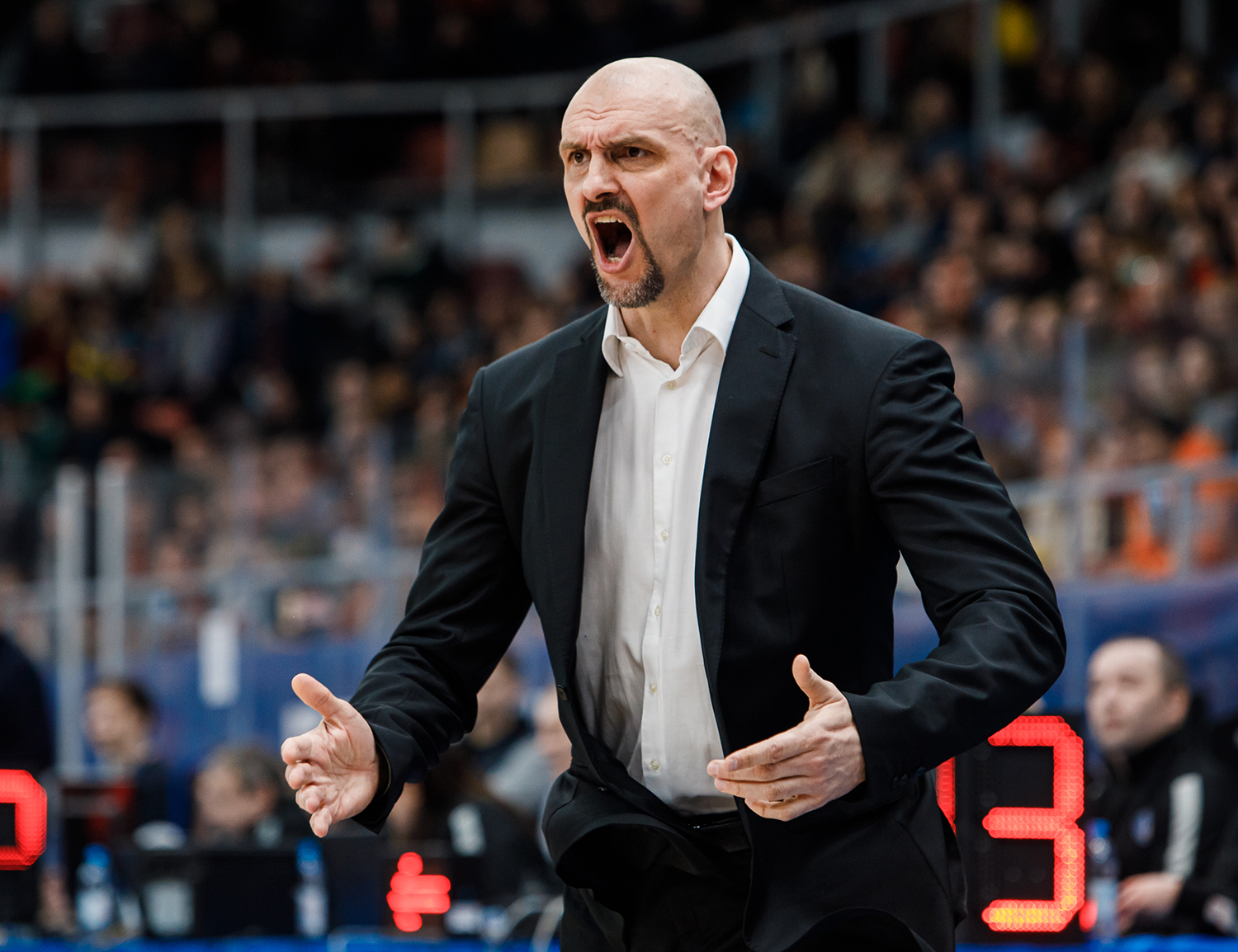 Zielona Gora head coach is one of the brightest specialists in the VTB League. Former legendary center is already seen as not only former player but as ambitious coach with iron will. The interview given to our site is about Olympics’ final, Hakeem Olajuwon advice, strongest team in Tabak’s coaching career and awkward questions.

– Your playing basketball path is pretty long, you played in 6 countries, became an NBA champion, played in the Olympics’ final. Tell us, how did it start?
– Just like all the guys that were born in former Yugoslavia I was interested in sports and started to do it since early childhood. At the age of 14 I began to play basketball, before it I had been trying swimming, volleyball, handball and water polo. All the different sports prepared me to professional career in basketball in terms of athleticism.

– At the age of 20 you had already become Euroleague three-time champion. How did you manage to save motivation after that?
– I think that for my generation, for me, kids and young athletes motivation has never been a problem. We didn’t have to face this unlike contemporary players. I don’t know, may be the point is that our life was tougher, we had other mentality, we were more mature. I am not the only motivated guy. All the kids that were doing sports were extremely motivated.

– In 1992 you played in Olympic Games final for National Croatian team. Did you believe before the start of the tournament that you could take Olympic medals?
– Yes, we definitely knew that we are one of the strongest tournament teams. Those Olympic Games weren’t usual, we wanted more than just showing good game. In 1992 it was really important for us to represent our country as Croatia had just become independent. Thus, besides fighting for medals we wanted to support Croatia, because there were few athletes besides us with Croatian flag.

– Was it possible to beat American Dream Team of 1992?
– At that moment, we were just going out on the court, trying to play well and trying to beat everybody. But now, when you look at that team from the other side, I don’t think we had a chance to defeat Dream team. There was too much difference between the American team and the other teams.

– The leader of the Croatian National team in 1992 was the legendary Drazen Petrovic. Do you consider him the best player in the history of European basketball?
– No, I don’t think so. But Drazen was an incredible basketball player, he was definitely the most patient and hardworking player, he spent the most hours in the gym, he was a real basketball fan. I’ve never seen a player like that before or since. When all these qualities are combined with great talent, you get an incredible basketball player, one of the best. But for me, the best European player I’ve ever played with or against is Toni Kukoc. – You won the NBA Championship in your debut season overseas. What’s the most memorable thing about that victory?
– Definitely, when you come to the NBA and win the title in the first season, you’re happy. It’s an incredible experience. I didn’t even speak English when I became an NBA champion. It’s all happened so fast, you didn’t have time to enjoy it. Speaking of memorable moments that are not connected to sports, I remembered the most, the birth day of my daughter in Houston.

– What’s more valuable to you – the Croatian National team medal at the Olympics or the NBA victory?
– It’s not a fair question. In one case, we’re talking about personal victory, in the other, patriotic victory. I think that for me, as a man who played for the Croatian National team when his country participated in the war, who wanted to represent his country in the international arena, the Olympic medal is more valuable.

– How did your former teammate Hakeem Olajuwon influence your career? Did he give you any advice?
– Hakeem Olajuwon is an incredible player and an incredible teacher. I’ve played with a lot of famous basketball players, but I think Olajuwon was the best mentor ever. Every day before and after practice, he took time to train me and play 1-on-1 with me. And he is still doing it.

– In 2000, you played against Shaquille O’Neal in the NBA Finals. Why couldn’t anyone stop Shaq?
– I don’t think anyone could ever stop Shaq, neither in the NBA, nor at the Olympics. Easy question and easy answer – I really don’t remember anyone stopping Shaquille O’Neal individually. As a team, breaking the rules, having a certain tactic, it was possible to slightly reduce his influence on the game, although he still scored his points. He is one of the many NBA players who simply cannot be stopped.

– Who is the best center of all time?
– For me, Hakeem Olajuwon. – Are you satisfied with your career as a player or did you have goals that you could not achieve?
– When I started my career, I had no goals. I started playing basketball because I loved basketball. I continued to play basketball because I loved basketball. Everything came over time, thanks to the passion for the game and hard work. But I had no goals. Now, several years after the end of my playing career, it is very easy to say smart things, so I will say that, of course, there were certain goals that I had to achieve.

– You have worked under the guidance of many famous coaches. Which of them was the most interesting and applied something unusual in his practice?
– I am really lucky that I have worked with many great coaches during my playing career. I played under the direction of Bozidar Maljkovic, Rick Pitino, Larry Bird, Isaiah Thomas, Aito Reneses, Sergio Scariolo. I don’t want to forget to mention someone, because there were many great coaches in my career, I was lucky. I try to take something from each of them. When I was a player, I didn’t think that I would become a coach, but now I try to remember what they did and apply some things in my practice.

– Do you have any idols among the coaches?
– No, I have no idols. I try to analyze the work of other coaches and learn from them. I think the best way to become a good coach is to watch basketball, follow the coaches and try to take the best from them.

-Is there a chance for a European specialist to become a coach in the NBA and gain a foothold there for a long time?
– There have already been several European coaches who have tried their hand at the NBA, but it’s very difficult. It is very difficult to be a coach in the NBA for any professional, not only for a coach from Europe. Those trying to make their way into the NBA now have to have connections in America – either they are Americans who played in college, or they have worked as an assistant coach for a long time. In the near future, I don’t see anyone who, as a head coach of a European club, can go to America and lead the NBA team.

– After leaving Betis in 2017, you had a 2-year break in your coach’s career. What is it connected with and why did you decide to return?
– I had personal circumstances that I needed to deal with. During this break, I worked as a TV commentator. As soon as I missed coaching, I immediately returned.

– Do you have hobbies besides basketball
– Yes, I was born by the sea, so I like everything that is connected with the seashore – for example, fishing and diving. I think a seaside vacation is the best way to relax.

– Who do you think is the strongest coach in Europe and in the VTB United League today?
– I will not answer this question.

– Can you name three qualities that characterize a high-level coach?
– Perseverance, flexibility and the ability to think with your own head.