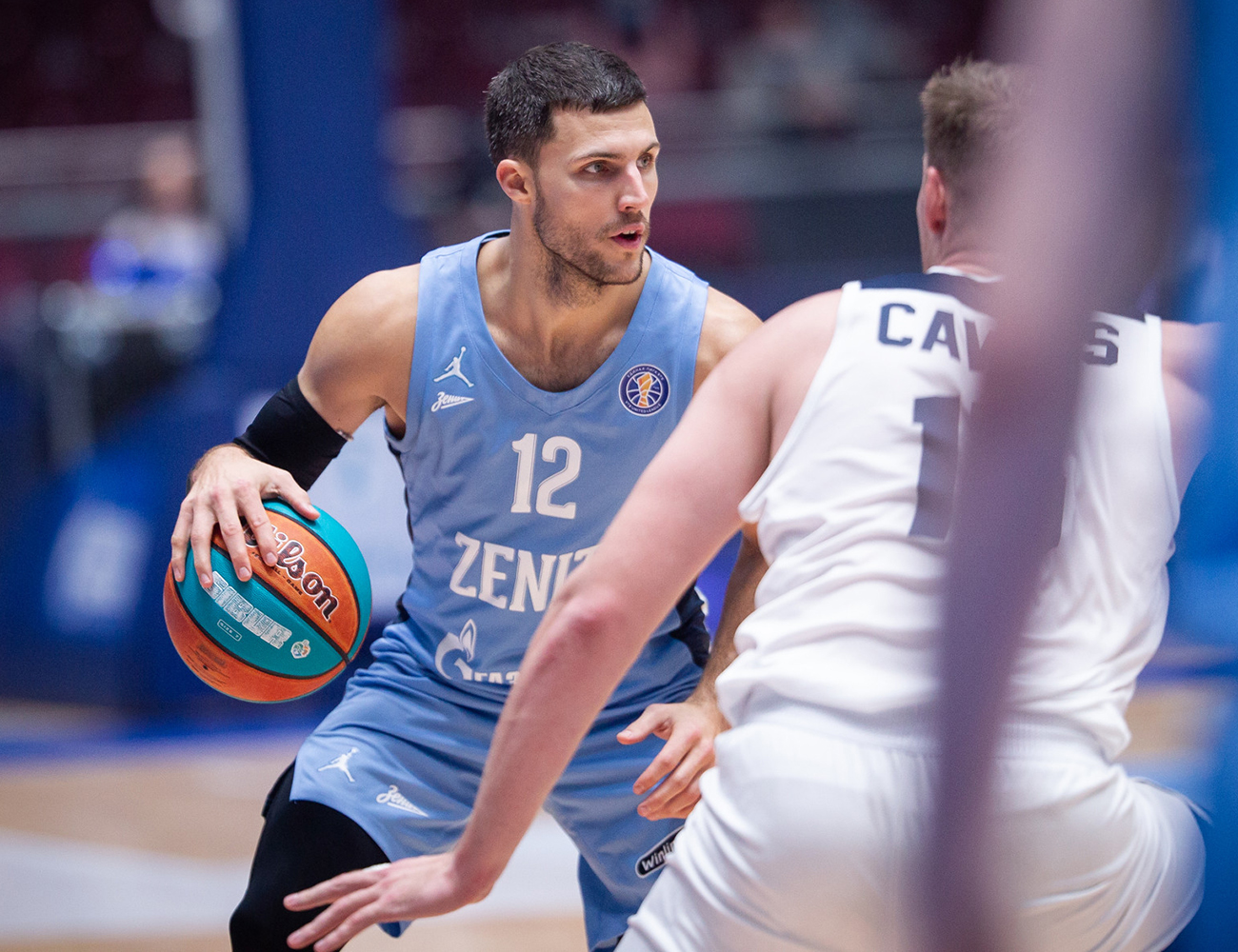 October MVP Billy Baron of Zenit talked to our website. He told about US national team invitation, players he follows, life away from wife and son, and why playing under father’s command was easier to him than his brother.

First of all, congrats on Octber MVP. What was the most memorable moment on the start of the season?
Probably, the first game. We hadn’t played in a while, it was a game against a good opponent, at Khimki. It was important for us to win. We knew based on pre-season games that we had a good team, but we had to stick to the plan and work hard in the fourth quarter. Good season start for us, it helped go forward.

You’ve become October MVP after a 6-month break. What’s the secret of success? How did you get fit?
There’s no secret recipe. You just have to work hard. You can work as much as you can, but it’s hard to simulate 5 on 5 action. And then we had some tough practices, good amount of preseason games. And I have great teammates and great coach. Everyone gets along, so we catch the rhythm and get the chemistry which you saw in the early part of the season.

Your borther Jimmy played in Russia in Lokomotiv, 2012/13 season. Did you talk to him before signing with Zenit? Any piece of advice from him?
Yeah, he told me a lot about VTB League, and I remember watching a lot of those games, they had a really good team. The first thing I thought was you do score a lot of points in VTB League, this is uptempo type of League, and obviously good competition. So this is the League I’ve always had my eye on, and I wanted my attempt here.

Zenit is your sixth team in 6 years. How come you never stayed longer than two years in a team?
I guess it’s because I’ve always wanted my career moving in the right direction like playing in Euroleague. I played in Eurocup four times and I wanted to play in Euroleague, that’s why you see me move from year to year. Every new team gives new opportunities. And now I’m in Zenit, they’ve put together great roster, and I really like the coach, he’s got a lot of plays and sets for guys like me.

Your father is a basketball coach, and your brother is a player. Does it mean that as a child you had no choice?
Yeah, a little bit like that. I don’t think I really had a choice. It wasn’t like I chose basketball, it was basketball that chose me. As a child, I grew up in locker room, I watched games of college my dad coached. My brother was five years ahead of me, so I watched my brother play, watched my dad’s games in college. I don’t think I really had a choice, because when you’re 4 years, you come to the games, you’re the biggest fan. I wanted to play on my dad’s team, and that’s what we chased with my brother.

Do you like soccer? It’s not very popular in the USA.
Not too much, I don’t really watch a lot of soccer games. I’ve played FIFA on Xbox, but that’s it.

But you could have your favorite player or team in soccer?
It’s always been Ronaldo. I can’t say I’m a frontrunner, but the way he keeps fit and stays at the highest level for so long, I admire it.

Does your father follow Zenit games? Do you receive any comment from him?
He doesn’t watch every game, he’s not very comfortable with technology, but VTB League does a great job making the games available. So he watches the games from time to time, but now that I’m a grown player, it’s different. He gives some advice, but now he’s more of a fan. So now I can hear something like “Nice job, Billy.”

What did it feel like to be coached by your father? Many players don’t like it beacuse coaches are much harsher on their sons.
That’s what it is. One coach told my father, “When coaching your son, he’s got to be the worst or the best player of the team.” It wasn’t easy, I knew it was a big responsibility and a hard work. On the other hand, I played as a point guard in college, just like my father. And that’s why we had better connection than Jimmy and my dad, because Jimmy is more of a shooting guard, waiting for the balls after screens. So I had great two years, my dad did so much for my game.

Who were you favorite players when you were younger?
As a student, I followed Steph Curry and Jimmer Fredette in NCAA. They’ve achieved great success as students.

But you are from Pensilvania. What about Allen Iverson and Philadelphia?
My father was a coach, he changed places, so I left Pensilvania as a kid. When I was 2 years, we moved to New York State, and then lived in Rhode Island since 10 years. I think Rhode Island is my home. This is a small state, just south of Boston, so I support the Celtics, the Red Socks and the Patriots.

Who are your favorite players now?
In the NBA, it’s still Steph Curry, and as of Europe, I always liked Juan Carlos Navarro. That’s why I’m happy to play under Xavier Pascual, as he coached Navarro. I like to watch Mike James play, he’s really good with tough shots, I like how Sergio Rodriguez can run a team in Milan. I don’t need to have a favorite, but there are players I like to watch.

That’s curious. Mike James is aimed to shoot, while Sergio Rodriguez looks for a pass, so they are completely different.
That’s true, but they can switch roles. James can play classic point guard, while Rodriguez can make tough shots. You can’t be one-dimensional on this level.

In 2014 and 2015 you played in Summer league and dreamed of NBA. At this stage, Zenit seems like an optimal choice?
NBA is a dream, but the older you get, the more you are preoccupied with your family’s finance, needs of wife and kids, and it matters to me. And obviously, when you play in Europe you can see the world. When I come home I can tell, “I played in Russia, Turkey, Spain, Serbia and Lithuania.” Maybe these leagues are not as famous in the US, but it’s not important. I think today, Zenit is the best choice for my career.

In 2017, you won FIBA Americup with USA national team. How did you get there?
Adrian Wojnarowski called me and told that NBA players wouldn’t participate in the FIBA Americup 2017, so the coaching staff were going to invite players from Europe and G League. He said I could be called if I agreed to Houston training camp. I said, “Come on, no way.” But in two weeks I was training under command of Jeff van Gundy. So we won golden medals after beating Argentina in a tough game. This is a great experience, playing in your country’s national jersey. This is something to tell your grandchildren.

Off to Uruguay for an opportunity of a lifetime to represent the country! Let's bring home the gold @usabasketball pic.twitter.com/Jg3ZEaOluq

Recently you tweeted that you had to fly away from your familiy to be able to play this season. Your family is still in the USA. How does it feel?
I’m a family guy, so it’s really extremely hard. My son turned one days ago, I celebrated with him on FaceTime, said, “Happy birthday, son.” It was very emotional. And then I thought why is it happening, what did I do wrong? All fathers enjoy watching live how their kids make the first steps, and the pandemic stops me from doing it. I hope to see my wife and son soon. I communicate with players who live in Russia with their families, and hope to find a solution.

What do you do in Saint Petersburg in your free time?
I’m a big restaurant guy, I like to go to restaurants with my teammates. Usually I pick places recommended by people I know. I haven’t seen a lot of local sights yet, cause I want to do it with my family.

And still, what would you say about the city?
Saint Petersburg is really beautiful. It’s like a postcard city, lots of rivers and historical buildings.

You played in Serbia for the Last two years. People say, the Serbians and Russians have a lot in common in terms of character and mentality. Do you think so?
I can’t tell much about the Russians, I’ve only had two months in Saint Petersburg. But the Serbians are really emotional people, that’s for sure.

How could you describe Russia in 3 words?
Very big country. We haven’t been in Krasnoyarsk, but I can imagine how long that flight is. I’m enjoying it, I really hope to spend more time in Moscow. I know it’s going to get cold, but I’m used to that, so I’m looking forward to see the country.