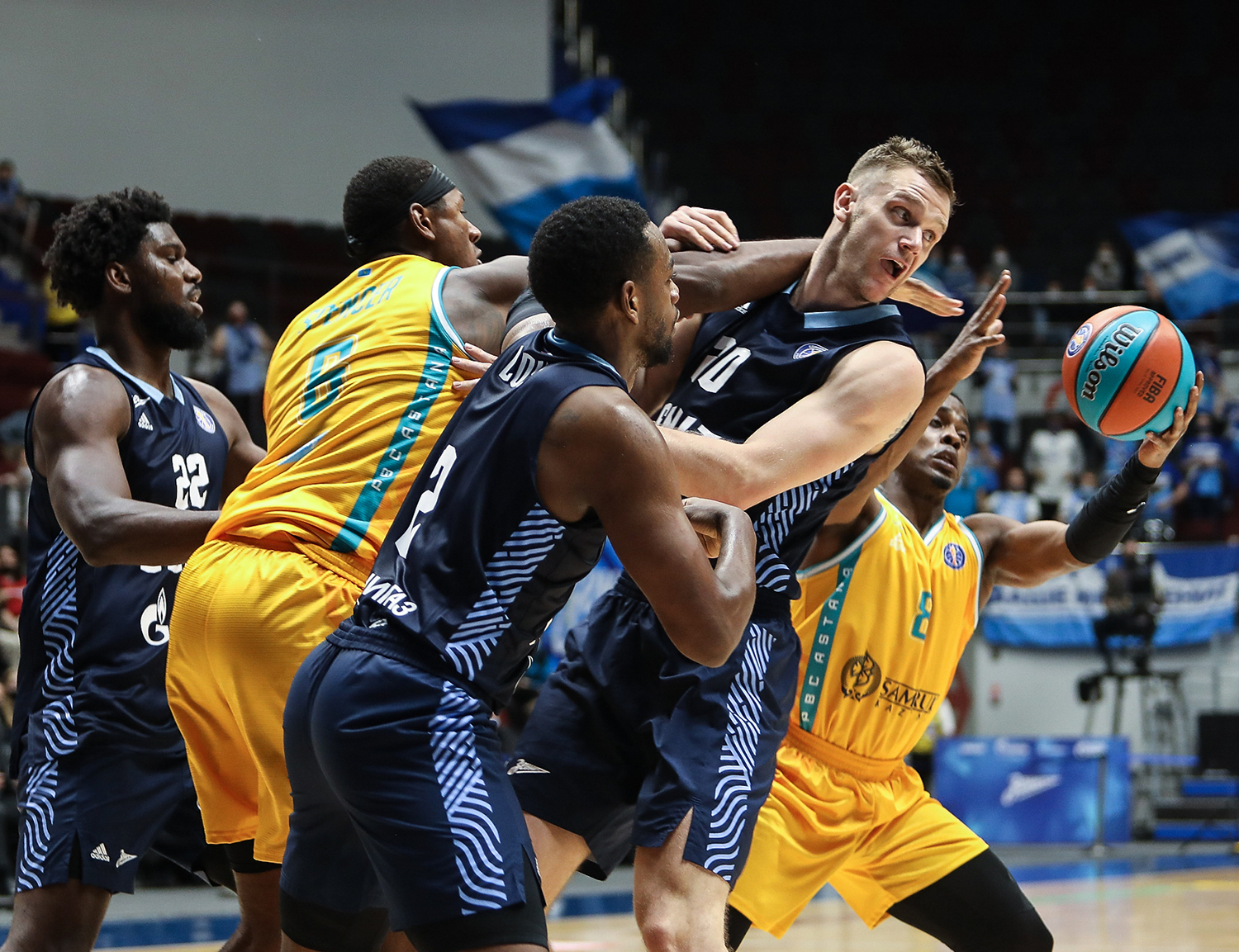 Game progress
For the new  Astana coach , Darko Russo, the against Zenit was his debut in the United League. And already in the first quarter, the Kazakhstan team showed that the Serbian coach did a serious job in the off-season. Astana immediately stunned the St. Petersburg team with a tight defense — in the first 5 minutes Zenit managed to score only 5 points. In offence, the guests also set difficult tasks for their counterparts: after two long-range shots by Maxim Marchuk, their advantage became double-digit – 15:5. These +10 gap remained by the end of the quarter.

In the second 10-minutes, Zenit gradually began to catch up with their rivals, and as soon as Astana long-range shots began to fail, the hosts equalized the score with Mindaugas Kuzminskas effort – 28:28. In general, the second quarter remained completely for Zenit, which won it almost by a two-fold margin. Shortly before the big break, Conner Frankamp and Jordan Loyd set the final score of the first half – 44:39 Zenit lead.

However, Astana managed to work on the mistakes with the great speed. Debutant Mark Tikhonenko and Maxim Marchuk continued to successfully occupy St. Petersburg rim from behind the arc. Zenit’s attempts to regain the initiative were stopped by Jaylen Barford, who scored 7 points in a row. In the Zenit’s offence, Dmitry Kulagin only stood out, holding his first game in the United League since February 2020. But his bright game at the end of the quarter was answered by Astana vet Dmitriy Gavrilov with his 4 points. By the beginning of the final game segment, the Kazakhstan team were again leading +10 – 65:55.

It seems it's time to move the three-point line..@BarfordJaylen pic.twitter.com/QoF5GbJbFx

The key moment
The fourth 10-minutes started really bad for Zenit. Two three-pointers in a row by Mark Tikhonenko and Rustam Murzagaliyev, a lay-up by Nikolay Bazhin – and the difference reached the maximum in this game +17 guest team lead. Zenit was not going to give up without a battle: Alex Poythress headed the St. Petersburg team run 11:2. But the St. Petersburg players had almost no time left, and Astana managed to cool the hosts’ motivation with successful drives by Nikolay Bazhin and Anthony Hickey. Xavi Pascual’s squad could not catch at the end. Astana wins in St. Petersburg for the first time since 2015.

Hero
Jaylen Barford. Even despite 5 turnovers, Astana newcomer was super-efficient. Having 58 eff. percentage from the game, he became the most valuable player of the game and clearly showed himself in defense — 4 steals.

Numbers
12 three-pointers out of 21 – Astana snipers were on fire this evening. By the way, 3 long—range shots were scored by Mark Tikhonenko, the son of the Russian basketball legend Valery Tikhonenko, who played his first game in the United League.

Comments
Xavier Pascual, Zenit Head coach:
– Congratulations to Astana. No question, they deserved to win. They were motivated, but we were out of the game, we had no interest to play today, there was no energy. I do not know why, to be honest. I’m telling the truth — we were out of the game. During the break in the locker room, we sorted out the game, we understood it, but in the third quarter, Astana made a run. We had mistake after mistake. Today we lacked character. We did everything wrong.

Darko Russo, Astana Head Coach:
– Today we beat one of the best teams in Europe. I’m happy. We started training on July 17 and got better with each training session. Today we played without the burden of responsibility, because we played against Zenit. Everyone expected us to lose, but we didn’t give up. I’m glad of that. We played well in defense, we acted clever in offence. It’s just one game, we’ll forget it. VTB United League is a strong league, there are a lot of flights here, you always need to be concentrated. Now we are not playing in full strength – a new player will join the team in a couple of days. I think we will become even stronger.

What’s next
Zenit: road game versus Lokomotiv-Kuban on October 17