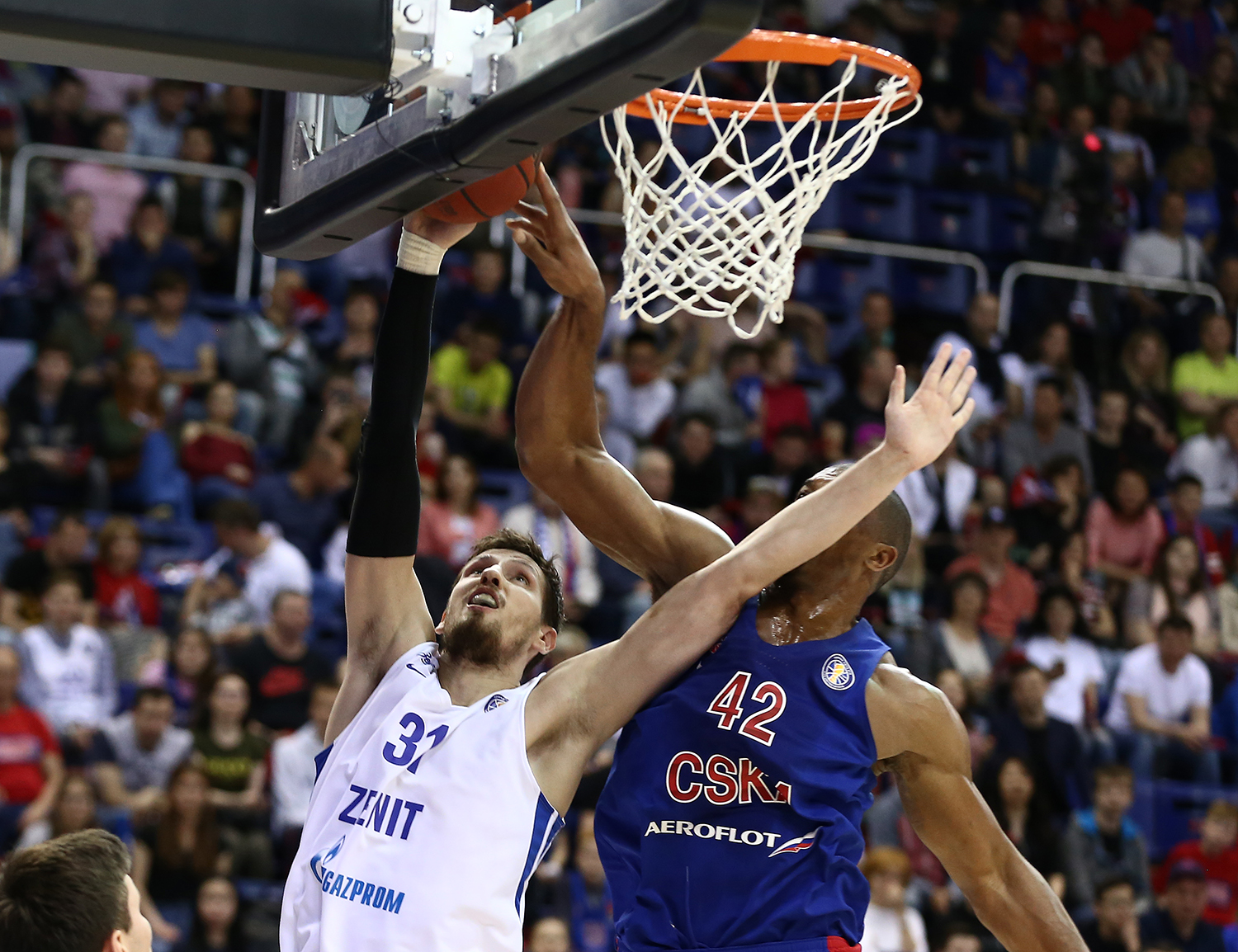 Story
CSKA survived a poor shooting night and a last-second three-point attempt from Sergey Karasev to take a commanding 2-0 series lead in the semifinals.

After pulling away with a big third quarter in Game 1, CSKA let an 11-point first-half lead crumble, trailing by as much as five late in the third.

Zenit, which was without big man Jalen Reynolds, outrebounded the Army Men and outshot the home team 51%-43% from the field.

The home team took its first lead since early in the second quarter on a Sean Armand layup, 50-49, midway through the third before Marko Simonovic, Armand and Codi Miller-McIntyre connected on three triples to put Zenit ahead 59-54.

CSKA answered with a 6-0 run that stretched into the fourth, setting up a dramatic final period.

Leading by as much as six midway through the quarter, Moscow gave up another Zenit comeback, as Sergey Karasev drained a huge triple with 2+ minutes to play that made it 77-75 in favor of the five seed.

With the game tied at 78, CSKA’s Daniel Hackett converted a huge four-point play, fouled by Gal Mekel on a 3-pointer.

Down multiple possessions, Zenit tried to rally one more time. Marko Simonovic was fouled a three-point attempt on St. Petersburg’s next possession, but only made one of three freebies. The visitors snagged the rebound, however, and Mekel scored to cut the deficit to one.

After Will Clyburn went 1-2 at the line, Zenit had a chance to tie or win, but Mekel was blocked and Karasev missed a last-second three following an offensive rebound.

CSKA hangs on to win by two and can now sweep the series with a win on Tuesday in St. Petersburg.

Stat
12-21 – the visitors shot only 57% from the free-throw line, including several big misses down the stretch.

Quotes
CSKA head coach Dimitris Itoudis: “Congratulations to the team on the win and desire to win. It was tough. We were clearly fatigued. Throughout this series–and I’m not using this as an excuse–we’ve been required to participate in various events. It’s the sweet hangover from a big win. Today we have another visit to a soccer game. We want to thank the CSKA fans and use the day to relax and recoer. We understood that it wouldn’t be easy today. We expected Zenit would battle and they played very physical, as aggressive as possible and at times even beyond. It’s never easy in St. Petersburg. We know that. Nonetheless, we didn’t reach our potential today. We shot a low percentage under pressure from our opponent.”

Zenit head coach Joan Plaza: “This was an excellent game for both teams. I think all the fans enjoyed it. I’m proud of my team. I don’t think the fans can blame us for anything today. I hope that absolutely everyone who roots for us is proud. We played a totally different game, like we promised. I said many times that in games decided by a single shot, any outcome is fair. It’s a coin toss. Of course, if you want to go into detail, we missed a lot of shots from the free-throw line and didn’t shoot a very high percentage, but we deserved the even finish. The outcome of the game was in our hands and we had the final shot. Sergey is one of the best shooters in the League, if not the best. He got a little unlucky here.

In St. Petersburg, we’ll leave everything on the court and do everything we can to win. I haven’t been in Russia that long, so perhaps my opinion doesn’t mean much yet, but I’m confident we don’t deserve to finish the season getting swept. We’ve deserved a win. Right now we don’t need to think about the fact that it’s a best-of-five series. We need to focus on one game, the next one. After such a tough season, with the way we’ve played in the postseason, we simply haven’t deserved going out 3-0. We’re going to battle until the end.”