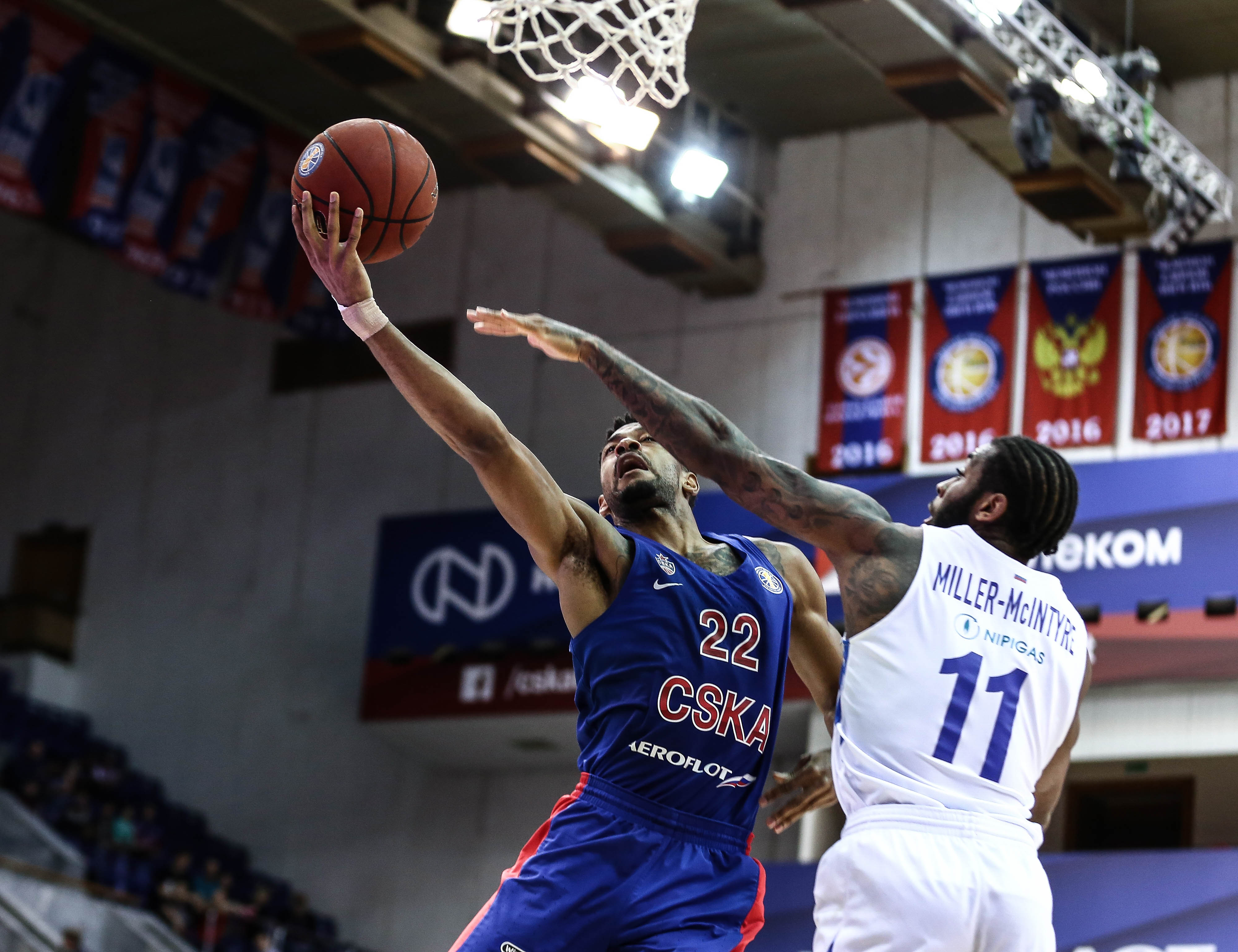 Story
CSKA spent a lot of energy at the EuroLeague Final Four over the weekend, while Zenit had not played in nearly two weeks. That didn’t stop either team from scoring early and often, shooting 53 and 56%, respectively, from the field in the first half. St. Petersburg got eight quick points from Jalen Reynolds to take a 15-11 lead, before the Army Men responded with several baskets from Othello Hunter, grabbing a 28-26 advantage at the end of the first.

The game stayed close until midway through the second quarter, when the Red and Blue used a combination of suffocating defense and hot shooting from Daniel Hackett to go up by double digits, 47-37. But Zenit was able to stick around, slowing down CSKA’s offense late in the quarter to go with 3-pointers from Gal Mekel and Jarrod Uthoff that made it a 49-45 game at halftime.

Soon after switching sides, Hunter got hot again, scoring six straight points in 90 seconds to put Moscow on top by eight, 57-49. Reynolds didn’t have an answer this time, but did get in an argument with the refs and was ultimately ejected with two technicals. CSKA continued to apply pressure and quickly regained a double-double advantage, 63-49.

Playing without their leader, Zenit was unable to get back in the game. CSKA maintained a comfortable double-digit lead the rest of the way, taking a 1-0 series lead in the process.

Star
Othello Hunter. One of the EuroLeague Final Four stars enjoyed another big performance in Game 1 vs. Zenit. Hunter finished with a career-high 22 points in a CSKA uniform, shooting 9-10 from the field to go with six rebounds.

Quotes
CSKA head coach Dimitris Itoudis: “Congratulations to the players. We only had two practices before the game, not to mention a few injuries and certain responsibilities as EuroLeague champions. Nando asked to be with his family, Chacho had issues with his leg and Will and Cory had injuries. We overcame all of the difficulties, including our burst of emotion after winning the Final Four. We’ve been in this spot before. At the start of the game, we thought we could win on offense along. We weren’t focused on defense with all due respect to the quality of Zenit’s offense. We offered answers in the locker room and the players found them on the court in the third quarter, giving up only 13 points and setting the tone on defense. At the same time, our offense continued to play well, creating and executing opportunities. The score in the series is only 1-0 and we still have a lot to do. We treat the work of the club and the fans with respect. I want to thank them for showing up in big numbers and applauding the players and myself. I talk a lot with Othello, both this year and in previous seasons. There’s a concept of “garbage time” in the NBA, which doesn’t exist in my system. Why do I bring that up? Othello had issues at first on defense and Reynolds had an easy time scoring. But then Hunter gave the team a boost with his aggressiveness at both ends. He adjusted his attitude in the course of a few seconds in the first quarter. I could have left him on the court longer and his stats would have been even better, but we’re in the playoffs and the team’s interests are all that matter. We needed to let others play and stay fresh. Othello understands that. As for Semen Antonov, it’s hard for a player to be out of the rotation. But he stayed positive, maintained an excellent work ethic and trusted the system. That’s why I congratulated him separately in the locker room and his teammates applauded. We need him since it’s the playoffs now.”

Zenit head coach Joan Plaza: “If you’re playing CSKA and think you can score 100 points and win, you’re mistaken. We got stuck in a shootout and CSKA will beat any opponent 9 times out of 10 in that type of game. Of course, there are always lots of reasons for a loss. At times, we treated our opponent with too much respect, other times we didn’t play our style. If you look at the stats, we were even in three of four quarters. We fell apart in the third quarter and that was the turning point. Of course, we weren’t great today, but the score is only 1-0. We’re going to battle and should play better in two days.

Jalen Reynolds is a passionate guy and that often helps the cause and the team, but sometimes this type of thing happens too. I don’t want to criticize the refs. Everything was fair. The ref gave Jalen time to calm down, but after a few seconds he started yelling again. Those who know me, know that I don’t build a team around a single player. I create a unit. I hope Reynolds can play in future games, but he needs to understand that this type of thing is not acceptable.”